The end of any long relationship tends to be viewed with reflection and sadness. And, when the people involved are an art collector and a dealer, lawsuits.

In the past several years, we’ve seen the unraveling of long-term bonds between duos such as Richard McKenzie, Jr. and Forum Gallery director Robert Fishko; Ronald Perelman and New York City gallerist Larry Gagosian; and Russian oligarch Dmitry Rybolovlev and Swiss art dealer Yves Bouvier. All have found their way into the courts, in each instance raising the question: What was the actual nature of this relationship?

Were they business partners, mentors and mentees, buddies, or some combination of all the above? Perelman and Gagosian might have seemed like friends with benefits; the benefits (for the collector) being access to sought-after works of art, dinners out, vacations in the Hamptons. One judge told the two that they should resolve their differences “at a cocktail party.” McKenzie, Jr. claimed in his lawsuit against Forum Gallery that Fishko and his wife and partner Cheryl “befriended McKenzie and his ex-wife in order to gain McKenzie’s trust.” After the years-long relationships soured and both McKenzie and Perelman claimed to have been wronged by their dealers, courts in 2014 and 2015 in effect told the collectors that they were smart enough to have known better.

With both McKenzie and Perelman, as well as with Rybolovlev in Switzerland, the buyers found out well into the relationships with their art dealers that the preferential treatment they had assumed—discounts, small mark-ups, first-in-line-status—had not taken place, and are now claiming to have been bilked.

Over a period of a dozen years, Rybolovlev was led to believe that Bouvier was receiving a 2 percent finder’s fee for prized artwork on the secondary market, not that the dealer was buying high-priced paintings and selling them to the Russian potash king at a huge profit. It was at a luncheon in late 2014 with an art advisor that Rybolovlev learned that an Amedeo Modigliani painting he had bought recently for $118 million from Bouvier had been purchased by the dealer for $93.5 million—a 26 percent mark-up—occasioning a sense of personal betrayal, before the requisite calls to the police and to his lawyers.

Similar, ill-defined terms characterized the Fishko dispute. McKenzie, co-founder of the Larkspur, California-based McKenzie Walker Investment Management, claimed in a series of lawsuits that Fishko promised him 20 percent discounts on primary market artworks sold by his gallery, as well as a cost-plus 5 percent price for artworks on the secondary market that the dealer would acquire on his behalf. “The term ‘cost’ was never defined,” Judge Laura Taylor Swain wrote in dismissing McKenzie’s lawsuit for fraud, breach of fiduciary duty and breach of contract, adding that no one other than McKenzie himself “knew about these alleged agreements.”

Ronald Perelman, whom Forbes identifies as the 36th richest person in the United States and 78th richest in the world with an estimated $12.4 billion, had purchased approximately 200 works of art from mega-dealer Larry Gagosian over the course of two decades before coming to the conclusion that prices were regularly inflated. In 2011, for instance, the price of a Cy Twombly painting, Leaving Paphos Ringed With Waves, jumped from $8 million to $11.5 million in the course of a week when the collector expressed interest in acquiring it. The price was knocked down to $10.5 million, but Perelman only discovered later that the person who had paid the $7.25 million and then resold it to Perelman happened to be a partner of the dealer, netting that partner a $2 million profit and Gagosian $1 million. Were this Wall Street, they’d be indicted. But in the art world, your dealer doesn’t have to be a broker/dealer. At all.

Other alleged instances of overcharging, breach of good faith and breach of fiduciary duty were claimed by Perelman, and a series of back-and-forth lawsuits took place. In the end, however, Perelman lost, because he and his corporate entity (MAFG Art Fund) hadn’t done anything other than take a dealer’s word for prices and values. “[T]hese sophisticated plaintiffs,” ruled the New York County Supreme Court, “cannot demonstrate reasonable reliance because they conducted no due diligence; for example, they did not ask defendants, ‘Show us your market data.’ ”

‘Collectors and dealers often resent what they see as the intrusion by lawyers into a giddy experience based on trust among gentlemen of means and honor,’ notes art lawyer William Pearlstein. ‘I do not think that collectors are apt to let down their guard when dealing with a familiar dealer. I think it is far more accurate to say that, because of their trust, they never had their guard up to begin with.’

New York art lawyer William Pearlstein identified a trend in these cases: people who have earned a fortune in business and have the wherewithal to buy multi-million-dollar works of art are finding “less sympathy in the courts,” he told the Observer. “In their businesses, they know not to just take someone’s word for something, but to do research, to bring in their lawyers to check things out, to do due diligence.” For some reason, he added, they don’t bring the same skepticism to art deals that they would to ordinary business transactions. A smile, an invitation to a party, the appearance of friendship and a handshake suffices.

“I don’t think the handshake deal has died at all,” he said. “The cult of the gentleman connoisseur continues to run strong in the art world. Collectors and dealers often resent what they see as the intrusion by lawyers into a giddy experience based on trust among gentlemen of means and honor. I do not think that collectors are apt to let down their guard when dealing with a familiar dealer. I think it is far more accurate to say that, because of their trust, they never had their guard up to begin with.”

Novices and less well-heeled buyers of art, on the other hand, are more apt to receive more sympathy from the courts if and when they accuse a dealer of intentionally misleading them as to the price, condition or rarity of an object, according to a number of lawyers active in the art field. In effect, there is a two-tiered system of justice based on what might be expected from an art buyer.

“Due diligence,” according to Judith Wallace, an attorney specializing in art law at Carter Ledyard & Milburn LLP, “is the factual investigation that a buyer undertakes before consummating a transaction, to confirm the essential assumptions of the transaction are correct.” In the art world, the essential issues that need to be checked are a work’s title (a title needs to be “clear,” meaning that that there are no liens, judgments or other encumbrances on the ownership of the art; that a dealer selling the artwork has the right to transfer title to the piece and that the art is not stolen property), authenticity (that it was created by the artist identified by the seller,) and the condition of the object.

The best approach to art purchases may be to conduct them, in legal parlance, at “arm’s length,” but the business aspect of it may be clouded by the aspect of friendship. Eric Grayson, a lawyer in Greenwich, Conn., who represented McKenzie, Jr. in his lawsuits against Forum Gallery, said that he doesn’t “believe in collectors being friends with the dealers they buy from. You may think that you are friends, but they think it is something else.” That view was seconded by Daniel S. Kokhba, a partner at Kantor, Davidoff, Mandelker, Twomey, Gallanty & Kesten, P.C. who specializes in art law. Kokhba noted that friendships between collectors and dealers “may sometimes be tactical. In the extreme, the dealer may use the friendship as a tactic to get the deal done.”

How do we describe the relationship between an art dealer and a longtime client? “It’s friendly. It may be very friendly,” said New York art lawyer Judd Grossman, while Chicago art lawyer Scott Hodes likened it to a marriage, in that when something goes wrong, hurt feelings arise and “it feels like a divorce.” Yet another art lawyer, Susan Duke Biederman, likened it to “Not a bromance exactly, but something between a personal and a business relationship.”

Wrapping a financial transaction inside an intimate social milieu enhances a buyer’s sense of well-being, Biederman noted, before adding: “I always get a little chest pain when I hear a client tell me he trusts the dealer.” 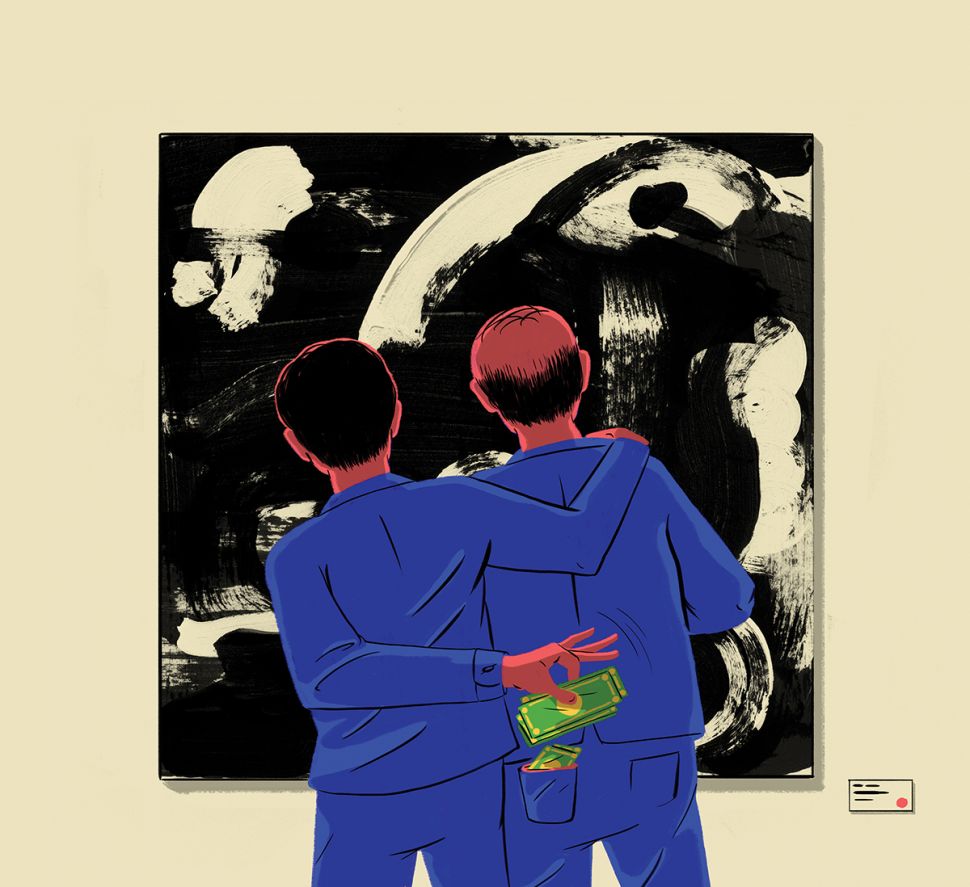