When children think of summer, visions of the beach, ice cream cones and what seems like endless freedom from school dance in their heads. For adults, it’s rosé. OK and some of those aforementioned things, but mostly rosé. The light pink wine seems like it was made for summer patios, barbecues and cocktail bars on docked boats, not to mention Instagram. It’s also pretty much made for cute slogans like “Yes Way Rosé” and last summer’s debut of White Girl Rosé. But pink may be on its way out; this summer it’s all about the blues. A Spanish winemaker called Gik has concocted a blue wine and it’s already a hit on social media.

The website wants you to “Try to forget all you know about wine. Ignore all the preconceptions and standards regarding [the] wine industry and turn a deaf ear to what the sommelier told you in the wine tasting last week.” Of course, you are going to have to ignore all the preconceptions, after all it’s blue wine! This seemingly unnatural hue comes from an “undisclosed blend” of red and white grapes from vineyards outside of Madrid. But to give it that extra special blue hue they add anthocyanin, a pigment found in grape skin, along with an indigo dye. Who doesn’t love their wine and cheese with a little side of anthocyanin? Co-founder Aritz López said they “wanted to create something really innovative” because the wine industry was “missing a little revolution.” And apparently that revolution was colored in blue.

A bottle sells for about $11, and is currently available in Spain, France, the United Kingdom, the Netherlands, and Germany, with U.S. expansion in the works. So it sounds like rosé will get bumped to the wayside soon, at least in New York, but you have to admit blue wine is a hell of a conversation starter. After all, we can only talk about how pretty rosé is for so long. 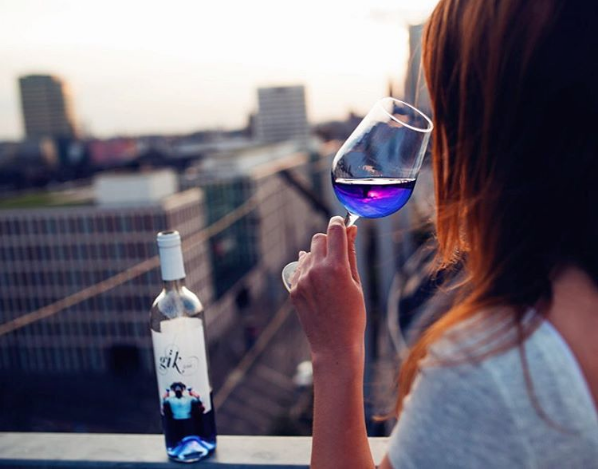