Only in New York would we grant an official title for the most gentrified neighborhood. Or at least that’s what happened this May, when NYU’s Furman Center placed the crown of gentrification atop Williamsburg’s head. The results took no one by surprise: The North Brooklyn neighborhood, alongside its neighbor to the north, Greenpoint, experienced a whopping 78.7 percent increase in average rent between 1990 and 2014. (No. 2 on the list, Central Harlem, saw rents increase 53.2 percent.) And like all the other gentrified areas on the list, Williamsburg had dramatic increases in young, white, college-educated residents with higher incomes.

But something sets Williamsburg apart, and it’s not just the price increases and booming residential market. In the past 11 years—since its waterfront was rezoned to accommodate residential development—the neighborhood has exploded like no other in New York. It was not so long ago that public access was nonexistent along the waterfront, that manufacturing businesses still occupied the warehouses, and there were only a few bars, and no upscale restaurants, along Bedford Avenue. But its unrivaled proximity via subway to both 14th Street and the Lower East Side brought a whole lot of downtown Manhattan culture over the East River and condensed it into this one neighborhood. Williamsburg now boasts everything from dives to cocktail lounges, some of the city’s best restaurants, nightclubs, concert halls, hotels, movie theaters, bowling alleys, boutiques and a craft chocolate factory. As Leah Archibald, executive director of the local business group Evergreen Exchange, called it “a tsunami of development.”

There were many factors setting the stage for the tsunami, according to Sam Beck, the director of the NYC Urban Semester Program at Cornell University, who studies gentrification. It traces back to the 1970s, when the New York economy was collapsing and started losing many of its manufacturing businesses. “Twenty-five percent of all manufacturing in New York City took place along the waterfront,” Beck explained. “But when the economy transforms, and there’s a loss of manufacturing, it created a ‘frontier area’ of land that was literally abandoned.” Just like in Soho, the emptied warehouses provided appealing live-work quarters to artists. And its direct proximity to Manhattan made it the most likely Brooklyn neighborhood not just for artists but the wave of development to come. “The Williamsburg Bridge, the L train and the M train offered a direct connection between Williamsburg and downtown,” said Beck. “So there was a natural movement of young people to Williamsburg.”

It was not so long ago that public access was nonexistent along the waterfront, that manufacturing businesses still occupied the warehouses, and there were only a few bars, and no upscale restaurants, along Bedford Avenue.

The artist population started growing in the 1980s and ’90s, when the neighborhood still struggled from high crime and drug use. “The reputation of North Brooklyn derived from the drug culture,” Beck said. “It was considered one of the worst neighborhoods in the city.”

By the late-’90s, gentrification was in full swing, but development had yet to catch up. And by now, community groups were envisioning a rezoning that brought better waterfront access, more park space, lower-density development and affordable housing. “A rezoning was certainly necessary, because the current zoning was treating the neighborhood as an industrial neighborhood,” said Stewart Sterk, director at the Center for Real Estate Law and Policy at the Cardozo School of Law. “The question wasn’t whether to rezone—it was how to rezone.”

With factors like market demand, vacant swaths along the waterfront, potential waterfront views and the city’s need for tax revenue from development, “there was a pretty good case for not making everything low density in that area,” Sterk said—although community groups worried about the neighborhood accommodating the thousands of new residents that the waterfront towers would bring. The zoning passed in 2005, covering 175 blocks over 375 acres, allowing industrial land to be developed with residential and commercial uses. In exchange for letting developers build tall luxury towers along the waterfront, the city required them to make 20 percent of the new units affordable.

Jeffrey E. Levine, chairman of Douglaston Development, was one of the first to develop along the waterfront after he invested in property in 2001 when the land was still zoned for manufacturing. “I knew it was a wonderful event waiting to happen,” he said of the waterfront boom. His first project was the Edge, a two-towered development with 1.1 million square feet, 565 condos, 347 affordable units, 60,000 square feet of retail, over an acre of public space, two public piers and a waterfront esplanade.

When the housing recession hit in 2008—Williamsburg had more stalled developments than anywhere else in the city—Levine invited the founders of the Brooklyn Flea Market to open a food market on one of his vacant lots, hoping some of that traffic would seep into the Edge’s sales office. “It was absolutely incredible from the start,” Levine said. The Smorgasburg market, which ran every weekend, would come to attract as many as 15,000 people to the waterfront on any given Saturday. (The site is now being developed by Douglaston as its final waterfront tower, the 554-unit rental 2 North 6th Place.) In both 2011 and 2012, after the market recovered, the Edge was the best-selling condo in all of New York.

The growth of Williamsburg also coincided with the rise of Brooklyn as a brand, not to mention the boom of young people flocking to the city—Williamsburg essentially became the headquarters for millennials arriving in droves. “The millennials are the defining generation of our business today,” Levine said, “and the millennials chose Williamsburg. Millennials don’t want to live on the Upper East Side, or eat at a gourmet French restaurant there. They want gastropubs, Asian fusion, the Music Hall, the cheese shop. They want what Williamsburg is giving them.”

Shaun Riney, a commercial broker with Marcus and Millichap who lives in the neighborhood, echoed the impact millennials have had. “The millennials have been drawn to the adaptive reuse that’s happening [in Williamsburg],” he said. “Instead of the baby boomer who wants to buy their house in the suburbs, millennials want to buy a garage and turn it into a restaurant.”

Millennials aren’t the only group arriving—the area has seen an influx of families, too. “When we first built the Edge, there were very few people with children looking for an apartment,” Levine said. “Five years later, we had at least 30 children under the age of 5 at the building’s Memorial Day party.” He called it the “natural evolution” of a neighborhood that initially attracted young people. Lior Barak, a broker with Compass, noticed an influx after a few of the waterfront developments opened, along with the arrival of daycares and preschools. He said demand for larger units in the area has increased “tenfold.” Levine’s firm decided to include more two- and three-bedroom units at its latest rental development to meet it.

With such swift changes, many long-term residents of the neighborhood have found themselves in shock. “Gradually it happened, but it was also very fast,” Barak said of the post-rezoning changes. “Honestly, I cannot keep up. You walk down Bedford Avenue on a Tuesday afternoon, and it’s crowded. It’s like reverse bridge-and-tunnel traffic.”

Archibald, of local business group Evergreen Exchange, talked about the organization’s transition from establishing a neighborhood crime watch for local manufacturers back in the ’80s, to its current fight to keep any manufacturing in the neighborhood. (The rezoning preserved some land for heavy manufacturing while other blocks were zoned M1 to accommodate light industrial uses.) “Under M1, a huge amount of use is actually allowed, which includes hotels and nightclubs,” she explained. “I did not anticipate the nightlife corridor coming to the M1 zone.” (The area around Wythe Avenue, zoned M1, is now home to the Wythe Hotel, nightclubs Output and Verboten, and the alley/club Brooklyn Bowl.) “Ten years ago, no version of myself would have said there’s gonna be a Whole Foods or world-famous restaurant in the heart of the industrial zone,” she said.

Debbie Medina, who has worked with the tenant advocacy group Los Sures for 30 years, criticized the city for not delivering on all the affordable housing or parkland promised with the rezoning. (Bushwick Inlet Park only partially opened in 2012; the city has hit many roadblocks in purchasing all the land it needs to deliver the entire park space.) She said that the only low-income residents who were able to stay in Williamsburg live in the co-ops that Los Sures helped establish in buildings abandoned by their landlord, or in the remaining rent-subsidized housing.

‘The millennials are the defining generation of our business today, and the millennials chose Williamsburg.’—Jeffrey E. Levine, chairman of Douglaston Development

Now running for State Senate as a Democratic Socialist, Medina’s campaign highlights affordable housing. “There are parts of East New York that are sad looking,” she said of the Brooklyn neighborhood the de Blasio administration has rezoned for new development, but, “Now, I want to go out there and squeeze the community, say, don’t let them do it!”

The average price to buy a home in Williamsburg is now $968,000, about a 7 percent decrease from last year. But Mike Slattery, vice president of the Real Estate Board of New York, predicts the Williamsburg real estate market will remain strong: “With young people arriving to New York City, we expect the market to continue to grow and prices to rise,” he said.

Riney, who praised the changes since he arrived in 2010—“the services are better, it’s safer to live here, there’s music and nightlife on every block,�� he said—put it this way: “I could live wherever I wanted, and I would not move to Manhattan if you paid me.” 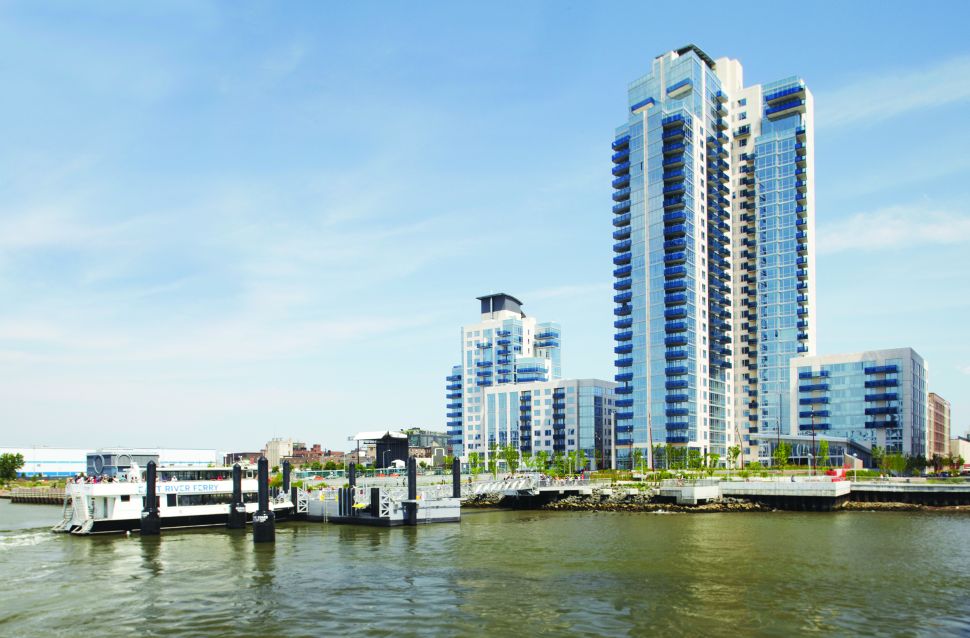