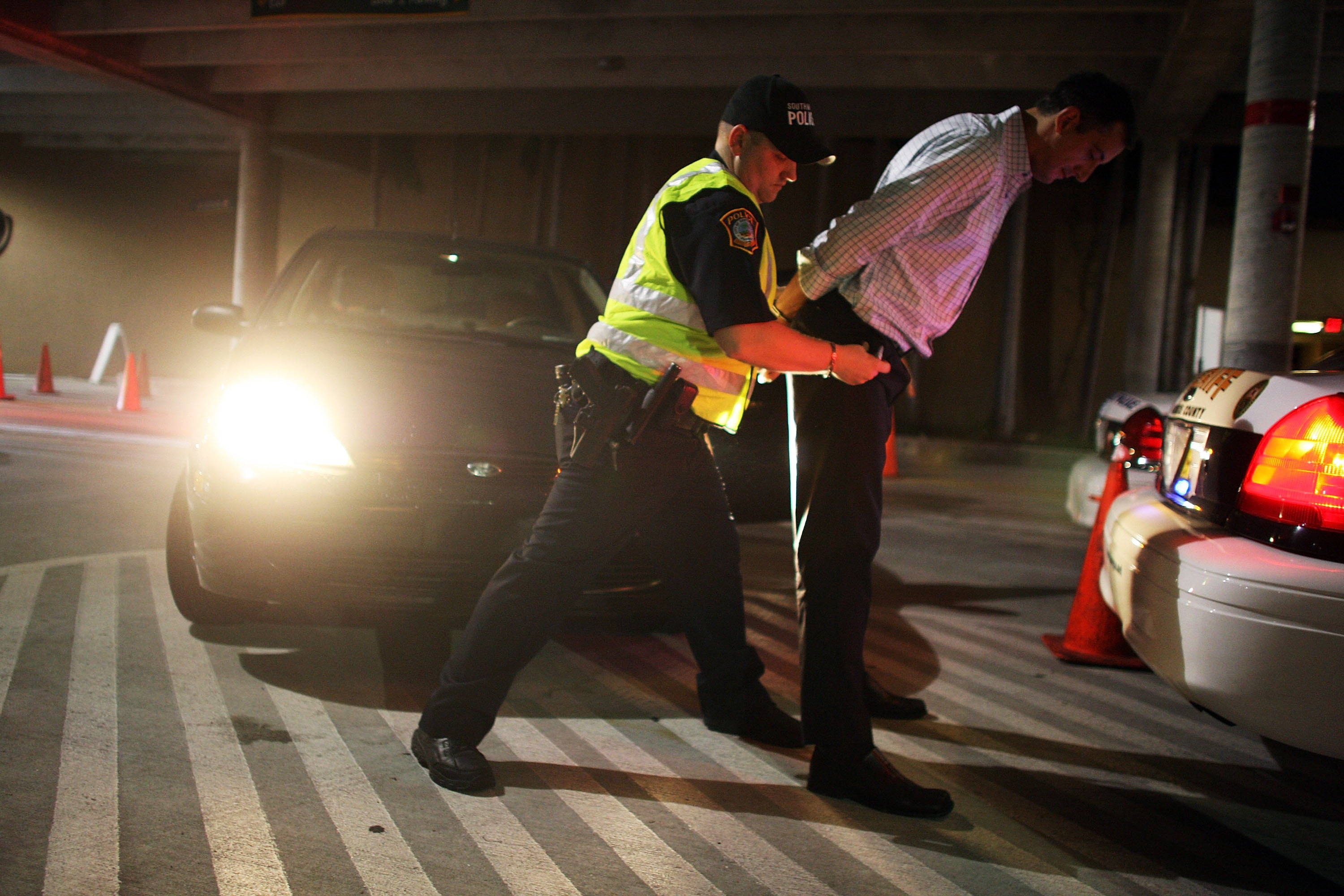 The first modern traffic stop of any note occurred in Washington D.C. in 1872. William West, a black policeman, arrested Ulysses S. Grant, the sitting President of the United States, for driving his horse carriage too fast down 13th Street. Officer West had warned the president for racing down the street the day before, and President Grant promised he would drive his carriage slower in future. When West saw the president on the same street the next day, again racing friends, he stopped his carriage and placed him under arrest. West retold the incident in the September 27th, 1908 edition of the Washington Star that ran upon his retirement from the police force, so the quotes, are, shall we say, suspect. But, according to West, and the flowery language of an unnamed Star reporter, here’s what happened:

“I cautioned you yesterday, Mr. President,” answered the policeman, “about fast driving, and you said, sir, that it would not occur again.”

“Did I?” mused Grant, still with a quizzical smile on his features. “Well, I suppose I forgot it, and that I might have been going a little bit too fast this evening: but hang it officer, these animals of mine are thoroughbreds, and there is no holding them.”

“I am very sorry, Mr. President to have to do it, for you are the chief of the nation, and I am but a policeman. But duty is duty, sir, and I will have to place you under arrest,” West replied.

“All right,” cried Grant, “where do you wish me to go with you?”

The policeman said he must go to the station house. At the President’s invitation the policeman took a seat in the vehicle and the war hero questioned him about himself and his antecedents. 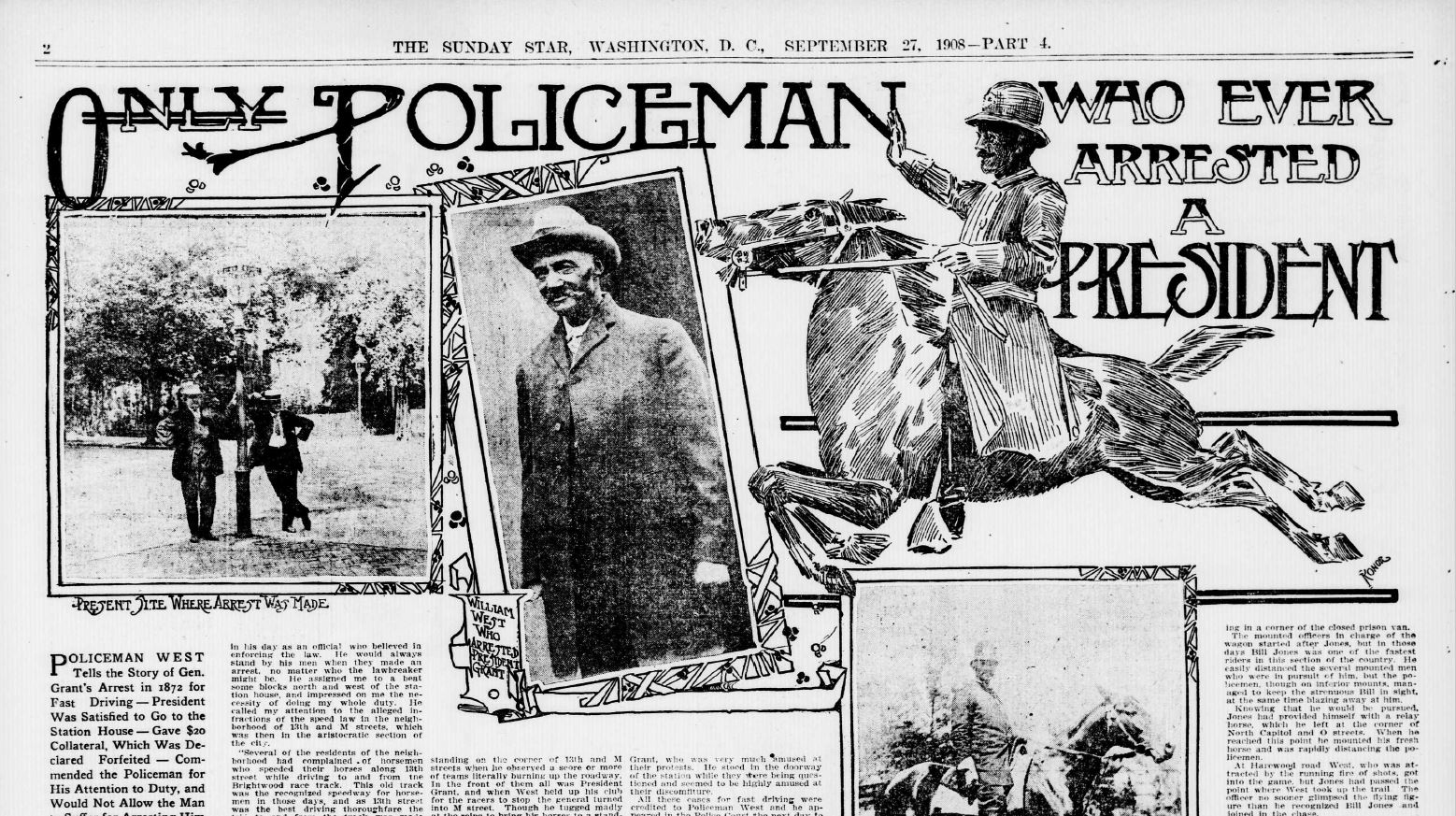 William West earned a spread in the Washington Star upon his retirement in 1908. (Image courtesy of the Library of Congress)

Grant went to the courthouse and paid a fine of $20. According to West, the two became friends and would meet over the years to talk about their shared love of horses.

If only all police traffic stops produced such goodwill.

Following a spate of high-profile police shootings of black men, including the death of Philando Castile in Falcon Heights, MN after a traffic stop and the assassinations of five police officers in Dallas, Tx. and three in Baton Rouge, La., the relationship between citizens and the police sworn to protect them, has become as contentious as it has ever been.

The traffic stop, according to the Bureau of Justice Statistics, is “the most common reason for contact with the police.” The agency estimated that in 2011, “42 percent of face-to-face contacts that U.S. residents had with police” were traffic stops. The side-of-the-road summit has a long history as a flash point in battles over the use of police power. Rodney King’s beating occurred after a traffic stop. The Watts riots of 1968 erupted after a confrontation at a traffic stop. So did the 1967 Newark riots.

“Cars are completely transformative,” said Sarah Seo, an associate professor at Iowa Law School and author of a recent paper on automobiles and policing in the Yale Law Journal. “The massive growth of police departments really happens after the mass production of automobiles,” she continued, “not just because of fear of crime, but also because cars were really destructive.”

When the car first appeared on the American road in the 1890s, many pedestrians deemed the invention as as a death machine. There were no real rules to the road and what laws there were varied from town to town. The rich owned cars before police departments did, so there was little law enforcement could do to stop them. Before the car, there was no concept of the “pedestrian.” The streets were for walking in and for horses trotting along at a few miles an hour (except, of course, for horses owned by President Grant). Cars completely disrupted people’s conception of the thoroughfare. Children had never been taught to look both ways; the entire road safety education motorists now take for granted only began after thousands of children were killed by cars. The model T was first produced in 1908, and large-scale car ownership started in the 1920s. By 1925, car accidents claimed about 20,000 traffic fatalities per year. That’s more than half of the traffic fatalities in 2015, a year when the population was three times as large and American drivers drove 25 times more miles than they did in 1925.

“People were outraged,” said Peter Norton, author of Fighting Traffic: The Dawn of the Motor Age in the American City. “Mainstream newspapers characterized cars and drivers as demons, grim reapers and juggernauts, as pagan deities that were sacrificing children’s lives for the benefit of a few well-to-do people.”

At first, the police responded by trying to slow cars down. Communities established speed limits of usually between eight and 12 mph, as well as traffic signs and early traffic signals. But, noted Norton, “there was an initial perception of helplessness among police because drivers could elude them…They had no vehicles and no radio so they couldn’t coordinate their action.”

Not surprisingly, Detroit was an early leader in motorizing its police force. In 1908, the department bought a fleet of Harley Davidson motorcycles and in 1909 it bought three police cars, according to Jeffrey Lemaux, the general manager and historian at the Detroit Police Museum. By the early 1920s, the department started experimenting with car radios (which, according to government regulations, had to broadcast music when not sending information to cars). 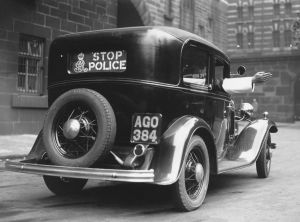 Even as police departments slowly started placing officers in vehicles, they were still overwhelmed with traffic duties. According to Norton, by the early 1920s, many cities were recruiting groups of citizens called “traffic vigilantes”  to regulate traffic, hand out tickets (a new concept), write down license plate numbers and sometimes even chase down speeders.

In the pre-radar era, there was no way to know exactly how fast a car was going. Sometimes police would travel at the same speed as a suspected speeder on a parallel street and use the reading from their own speedometer to determine whether a motorist was speeding. Often, police would set up speed traps, with one officer a measured distance from another. The first officer would signal as a car went by and the second would use a stopwatch to time how long it took for the car to reach him, using the recorded time to decide whether to pull the speeder over.

The additional workload created by the automobile overwhelmed both the courts and police departments. Police departments expanded. According to U.S. Census records, in 1910 there were 61,000 police in the U.S.; by 1920 the number of officers grew to 82.000. In 1930, there were 130,000. Prohibition prompted much of the expansion, but authorities deemed traffic the bigger problem. As Seo of Iowa Law School said, August Vollmer, Berkeley, California’s first police chief who is considered by many to be the father of modern law enforcement, called traffic “the police problem of today” in 1924. Prohibition gave police reason to search vehicles, and the legislation happened to correspond with the decade in which both the average American home and police departments acquired automobiles. Traffic stops became much more common.

In the early days of the automobile, there was some debate as to whether the car should be considered private or public space under the law. Some early legal opinions argued that the car should be considered an “effect” under the 4th amendment’s guarantee that “persons, houses, papers, and effects” would be protected against unreasonable searches and seizures. But in 1925 the Supreme Court ruled in Carrol v. United States that police could search cars without a warrant, creating what is called the “automobile exception.” The courts have argued over what the police can do during a traffic stop ever since. Every few years the Supreme Court rules on a case related to what is probable cause and what is a reasonable search and seizure during traffic stops. Before the automobile, citizens rarely were put in a position in which an officer could search their property, or ask to search it.

So-called revenue policing was also less common before the mass production of the car (although certainly individual police were more open to bribes before the widespread professionalization of law enforcement beginning in 1920s). With the traffic ticket, every traffic stop turned into a money-making opportunity.

“Every little town with a main road running through it loved [the automobile], because they thought ‘oh we can increase our revenue.'” explained Cotten Seiler, author of Republic of Drivers: A Cultural History of Automobility in America. Policing the roads was “always about more than public safety.” Seiler said. “It was about the exercise of the various types of power: local power, racial power and also about making money.”

The advent of automated driving could curtail such policing. If all cars are programmed to obey speed limits, programmed to go to the nearest mechanic if a brake light fails, are programmed to precisely follow the law, what then will justify a traffic stop? It’s possible that the 20th and early 21st century will be remembered as an anachronistic time when we accepted fairly adversarial interactions with police as a necessary component of daily travel. The traffic stop as we know it could be coming to an end.

But that may be a utopian view. The rich will most likely be the first ones to adopt automated cars. If that’s the case, the poor will continue to be subject to police power in a way that the rich, with their new types of fancy driving machines, won’t be.

History does tend to repeat itself. 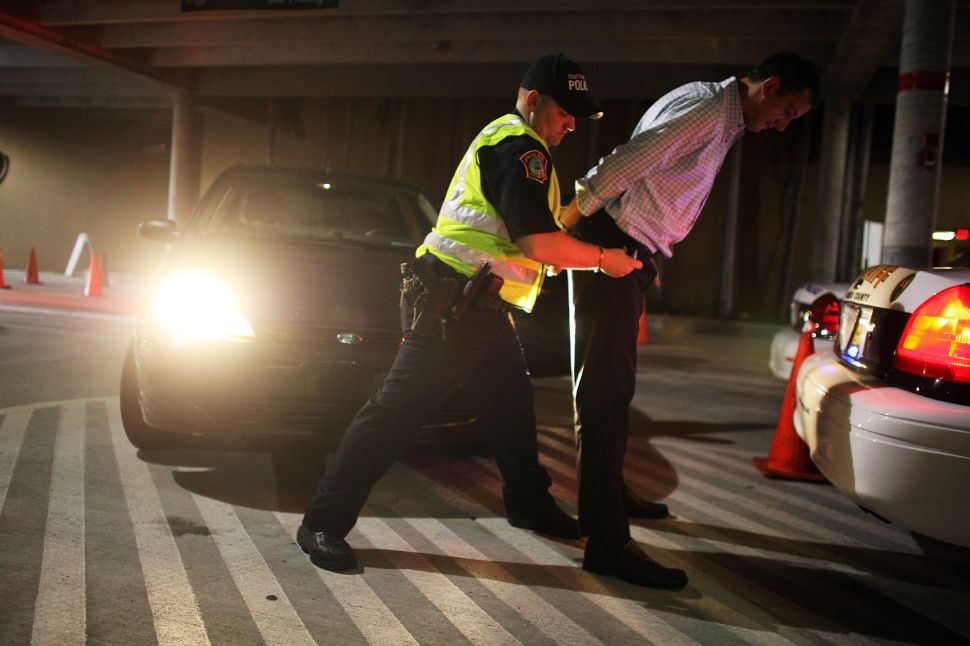