With her primary rival making the motion to make it official, Hillary Clinton made history tonight as the first woman to formally be nominated as the Democratic Party’s nominee for president of the United States.

The roll call vote is largely ceremonial—Clinton has been the presumptive nominee for months after hitting the delegate threshold through primary and caucus wins—so it was fitting that it was filled with ceremony, down to the very end, with Vermont passing on its first call so that the home state of Sen. Bernie Sanders could close out the former secretary of state’s historic win.

“I move that the convention suspend the procedural rules. I move that all votes, all votes cast by delegates be reflected in the official record. And I move that Hillary Clinton be selected the nominee of the Democratic Party for president of the United States,” Sanders said, to applause from the floor.

Asked for a second, the crowd shouted “Second!” A moment later, the “ayes” had it, and Clinton was offered the nomination.

It was one of many ceremonial moments. A childhood friend tearfully cast the votes for the candidate from Illinois, saying “This one’s for you, Hill.” A 102-year-old woman—alive longer than women have had the right to vote—cast the state of Arizona’s votes for Clinton in a moment that led the crowd to roar with applause.

In addition to odes to Clinton and vows to make her the first woman president, the roll call was also one more chance for Bernie Sanders supporters to show their might. But while they heckled and booed Clinton’s name repeatedly yesterday, yelling over speakers and upending the Democratic Party’s preferred narrative about unity and replacing it with one about division, the vote was orderly. Save for a few lifted signs early in the process—including one that read “Election Fraud”—the support for Sanders was kept to the short speeches made by those casting votes for him.

Among those people was Larry Sanders, the Vermont senator’s brother, who cried as he recalled their parents—”They did not have easy lives and they died young,” he said—and how “immensely proud” they would be of his brother and the political movement he led.

The roll call followed the formal nomination of Clinton, offered by Senator Barbara Mikulski of Maryland, the first woman elected to the Senate and to chair the Committee on Appropriations.

“And so, on behalf of all the women who’ve broken down barriers for others, and with an eye toward the barriers still ahead,” she said, “I proudly place Hillary Clinton’s name in nomination to be the next President of the United States of America.”

The nomination was seconded by Congressman John Lewis, the civil rights icon.

“I give you a leader, a great leader who can unite us as a nation and as a people, a leader who can break down barriers and build a better future for every American. She will fight for us all with her heart, soul, and mind,” Lewis said, shouting. “My fellow Democrats, I am pleased to second the nomination of Hillary Clinton as our party’s candidate for president of the United States.”

This story has been updated with additional information. 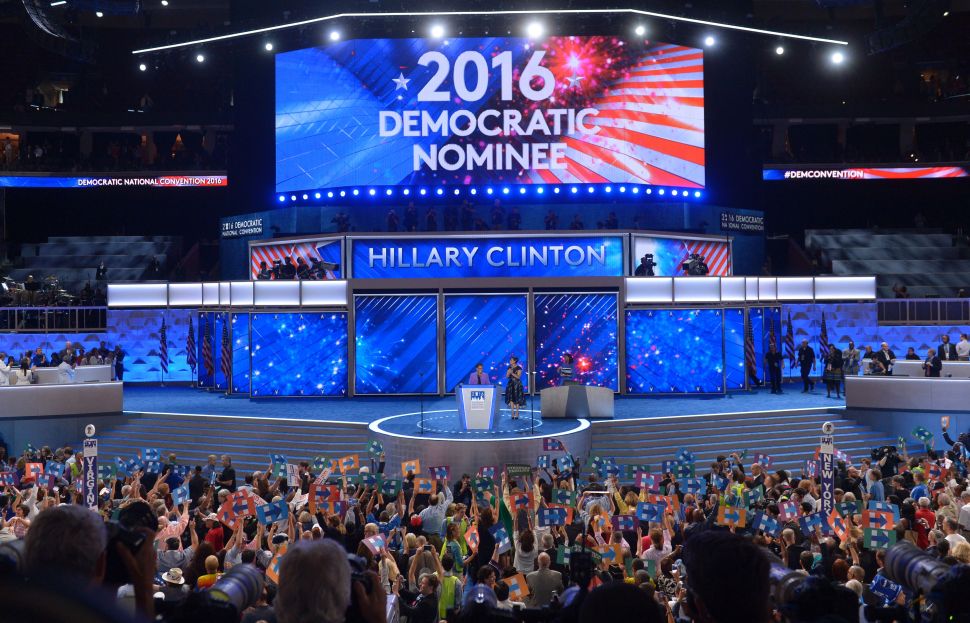