As Mayor Bill de Blasio’s point-person for minority- and women-owned businesses, Maya Wiley, departs the administration, advocates are wondering what will come next for the city’s programs to attract those businesses moving forward.

Wiley, who also served in the much higher profile role of the mayor’s counsel, has earned mixed reviews for her work on recruiting the businesses, known as MWBEs in city jargon—the slow progress of city agencies has been the subject of an audit by the comptroller and has earned itself vocal critics, among them some former allies.

“Maya’s departure will have impact,” Assemblyman Michael Blake, a member of a City Hall advisory council on the subject, said. “She’s well-respected…and listened to advice and guidance and so now it’s about figuring out what happens from here. I’ve been concerned with some of the decisions that we have proposed that have not been implemented and I don’t think it’s on Maya’s shoulders.”

But others, like former de Blasio backer and leader of the Black Institute Bertha Lewis, have been less measured in their criticism of Wiley’s tenure. And one aspect that has troubled them—that Wiley juggled her MWBE duties with being the mayor’s lawyer (an especially tough job while he is the subject of several investigations) and expanding broadband access—may not change, as the city said the mayor’s next counsel will also oversee MWBEs in addition to its other duties.

“Everything starts from the head down, so the mayor put those four hats on her,” Lewis said. “She put up a good game face. She knows herself she could have done better, but common. Her tenure as the director of MWBE was abysmal. That’s just the truth.”

Lewis has aggressively and publicly called on the city to hire a full-time chief diversity officer with deputy mayor status. Meanwhile, the city has pointed to what it says is progress—including the creation of an advisory council, the appointment of a senior advisor on the subject, Jonnel Doris, changes to the city’s Procurement Policy Board and movement towards a goal of $16 billion in MWBE contracts by 2025, a deadline well beyond de Blasio’s tenure even with a second term.

But Lewis maintained it is unclear what the Advisory Council has accomplished and dismissed the changes to the Procurement Policy Board as “platitudes.” She also said the mayor has not addressed the lack of bank loans given to MWBEs.

“It seems to me that if you are a competent administration, when you have a major person who’s supposedly in charge of a major program in the administration which has been abysmal, that once you make that announcement, you need to be ready to say, ‘This is how we’re moving forward,’” she said.

Members of the advisory council acknowledged that increasing opportunities for MWBEs will be an ongoing process that takes more than one individual, but said Wiley’s departure will have ramifications. Blake, the Bronx assemblyman, said there has been “some level of progress” but that there are substantial opportunities for MWBEs in multibillion-dollar projects, citing LaGuardia Airport, John F. Kennedy Airport and the Port Authority Bus Terminal as examples.

He was less concerned about a specific title for an MWBE point-person than he was about that person’s access to the mayor.

“The bigger thing for me is how do we ensure whoever comes in after her has that same accountability,” he said. “You don’t need that scenario of multiple (people) coming up through the chain.”

Bonnie Wong, founder and president of Asian Women in Business, a national nonprofit for Asian women entrepreneurs and professionals, questioned the belief that Wiley wore too many hats as she had employees. She only met Wiley twice but said she was well-liked and that she was not ousted but rather given a new position.

“Maya’s terrific,” Wong said. “She’s just this brilliant, wonderful person but then people do move on. I don’t see it affecting the mayor’s agenda for MWBEs because there’s other people doing the work on it.”

She also stressed that the advisory council is a recent creation and that so far, they have spoken about goals and MWBE issues.

The mayor, she said, has made a point of pushing for more diversity in his administration—she believes more than any other mayor before.

“He really believes in MWBE, he believes in a higher goal so there will be more minority and women businesses being utilized by the city,” she continued. “He believes that the appointments should reflect the racial composition of the city.”

When asked about the city’s strategy, de Blasio spokesman Raul Contreras, provided a list of people he said had also worked on the issue, including Small Business Services Commissioner Greg Bishop; Michael Owh, director of the Mayor’s Office of Contract Services; and Design and Construction Commissioner Feniosky Peña-Mora.

“While we miss Maya Wiley and the great work she has done, she was part of a larger team committed to increasing opportunities for MWBEs,” Contreras said.

The city says it started pushing for more opportunities for MWBEs more than two years ago. Process changes the city has implemented to increase the opportunity of MWBE firms to win contracts resulted in a 12 percent increase or an additional $6.1 million going to MWBEs, the city said.

In an emailed statement, Wiley—who will depart for a job at the New School but will remain in the City Hall orbit by chairing the Civilian Complaint Review Board—said the mayor understands that MWBEs are an important part of tackling income inequality and that the city is fighting for tools the state uses to work with MWBEs.

“I transition with a talented and growing MWBE team that now proudly includes Rev. Jonnel Doris,” she said. “It’s a team that increased the number of contracts to MWBEs by more than 3,200—a 63 percent—increase and has changed policies, created more accountability and greater support for agency success.”

Doris is tasked with pinpointing strategic policy guidance, programs, services and accountability mechanisms and advising City Hall on how to guarantee participation of MWBEs in the procurement process. He will lead the city’s MWBE efforts while the administration searches for a replacement for Wiley.

“More can and will be done, and I’m honored to be part of this progress,” Doris said in an emailed statement.

This past legislative session, Brooklyn Assemblywoman Rodneyse Bichotte, chairwoman of the Oversight of Minority and Women-Owned Business Enterprises Subcommittee, and East Harlem Assemblyman Robert Rodriguez introduced a bill that would give the city some of the same tools enjoyed by the state to benefit MWBEs.

Bichotte said she is “saddened” by Wiley’s departure, but noted that she had a team under her.

She agrees with advocates such as Lewis, arguing MWBEs face discrimination and that not all mayoral agencies are participating in the procurement process. But she insisted that the current mayoral administration has done more than previous administrations.

“I think we’re just going to have to find a new person but her team itself are the actual doers,” she said. “They’re the policymakers. They advise her and they’re still in place. It’s not like the entire MWBE organization under the mayor’s house has collapsed.” 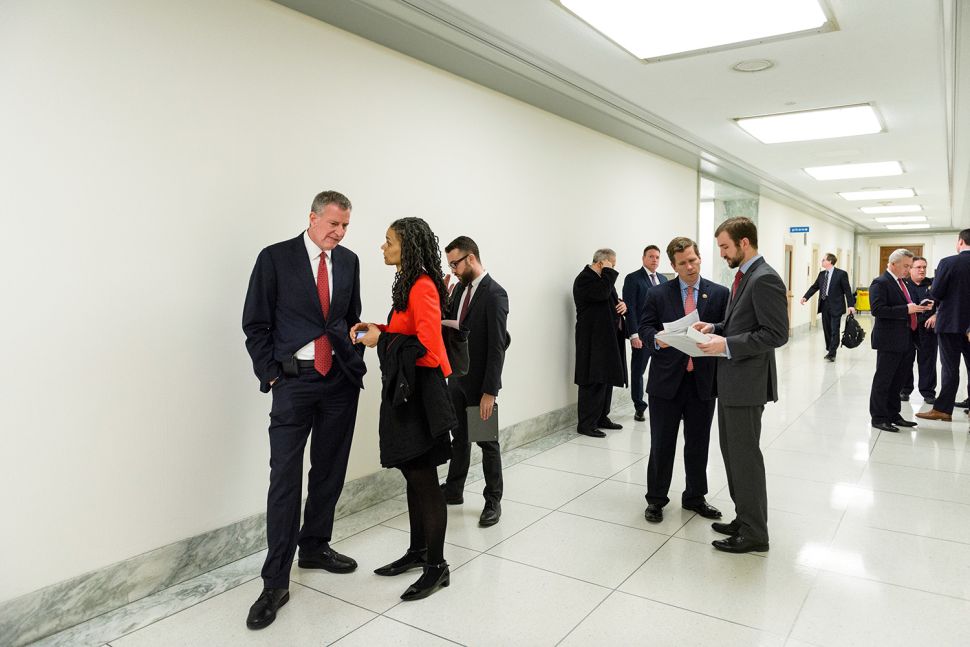