As Castile bled to death from bullet wounds in the front seat of his vehicle after a traffic stop Wednesday, his girlfriend—Diamond Reynolds—used her cell phone video to calmly narrate what happened as it happened, streamed live on Facebook as Castile’s red blood stained his white shirt.

Her 10-minute documentation was repeated almost everywhere, at least in part, Thursday.

With her four-year-old daughter in the back seat, her voice stayed eerily composed, almost soothing, as a nervous police officer trained his pistol through the window in her direction, his hands and voice shaking as he shouted orders to her.

She answered the jittery cop in a delicate way, calling him “sir” repeatedly, perhaps realizing that her life and that of her daughter were still in grave danger.

When other cops arrived and the mood chilled, the reality hit Reynolds, who began to pray in a more urgent tone of voice for the soul of her boyfriend, who could be heard moaning early in the video but not for long.

Her face jumped on and off the narrow picture frame, which sometimes went black as sound continued. That gave her voice more pathos and bathos as she was handcuffed and placed in a squad car with her daughter.

After about 10 minutes, Diamond Reynolds voice let loose a loud a scream of anguish.

This brought a comforting voice from her daughter.

MSNBC showed this at length Thursday; CNN showed it too, but not as much. Fox News showed a few snips but played it down in favor of repeated reports about Hillary Clinton’s emails and a Congressional hearing about them Thursday morning.

By prime time, both CNN and MSNBC were showing marches protesting the police killings. They were growing in size in New York, Atlanta, St. Paul, Dallas and other places. CNN showed the most, followed by MSNBC. Fox barely paid attention to either story through The O’Reilly Factor at 8 p.m. and most of The Kelly File at 9 p.m.

But that suddenly changed at 9:59 p.m., when anchor Megyn Kelly was finishing her show by devoting her last segment to this week’s two killings by police of two black men, the first in Baton Rouge, the second in Minnesota. She mentioned the protest marches, particularly the one ending in Times Square.

But, on screen, the picture from Dallas affiliate KDFW suddenly showed demonstrators running as if in great fear through the downtown streets. Kelly continued her off-camera conversation with one of her pundit panelists but sensed the seriousness of the feed from Dallas.

A jumpy camera image seemed to show a police officer lying on the pavement.

The images went back and forth, up and down, in and out. Someone behind camera in Kelly’s studio said “Oh, my God!” when it became clear that at least one cop, indeed, has been gravely wounded.

Kelly’s awareness gave Fox the edge on its rivals for much of the next hour. Both MSNBC and CNN were slow to catch up with what Fox had shown, with reporting that cops were shot.

Even into the 11 p.m. hour, Fox held the edge as Shepard Smith replaced Kelly in the anchor chair and talked with newscaster Shaun Rabb in Dallas.

“Multiple officers are gravely injured,” Rabb said. “This is going to be a horrible night before the sun rises.”

His ominous words were the first hint of the scale of the attack and how it had been focused on police.

Snipers, all the stations eventually reported, killed at least five police officers and wounded at least six. Fox, with reporter Casey Stegall on the scene, provided the most dramatic and informative reports, at least in this period.

Stegall simply interviewed articulate people who told him what they saw and heard.

“High caliber,” a man told Stegall of the gunshots. “Fifteen to 20 different shots. Semi-automatic. Continuous fire. Two or three minutes of shooting. Police began to return fire. The protestors were trapped in the middle.”

Stegall spoke from the front of yellow, crime-scene tape, with flashing police lights behind him and sirens wailing underneath his voice.

Because he had only one cameraman who was stationed at a distance, the lens moved professionally across the scene, almost dancing to views in sync with Stegall’s narration, boring in for closeups of him before pulling out for wide-angle views of the scene.

But CNN regained the advantage at 12:47 a.m. when Don Lemon—on since 10 p.m.—interviewed a witness named Ismael DeJesus, who made a video of at least one shooter from inside his hotel room. It showed an armed man on a sidewalk, hiding behind a big pillar and firing a gun.

The blurry image of the man was framed by two vertical bars of the hotel room’s balcony. CNN producers kept looping this scene, over and over again, along with a different amateur shot from a different angle that was not quite as revealing.

“It looked like an execution,” DeJesus told Lemon over the phone while his video played on screen. “Shot him three or four times. It was very, very disturbing to watch.”

He said the attacker must have been wearing body armor.

“The cop shot him in the back and it did not faze him,” DeJesus said. “He just turned around and shot the officer.”

The video was remarkable in several ways. Until this point, all the reports had said the shooting came from snipers on an elevated perch, perhaps in a parking garage. This was the first report of a ground attack.

There were reports of arrests of a woman and two men and a 1:30 a.m. news conference in which the police chief, David Brown, said one final sniper was surrounded by police. The attacker, he said, was still exchanging gunfire with cops while negotiating and making threats.

“The end is coming,” Brown said the sniper told police.

Two hours later—at 3:25 a.m.—MSNBC’s Brian Williams reported the “suspect has been neutralized” according to NBC affiliate KXAS. That’s one of the vague phrases police sometimes use. Was he shot dead? Was he arrested?  (At 3:50 a.m., Fox reported that KDFW said the suspect shot and killed himself).

As Friday dawn approached, so many other questions remained unanswered. Was this terrorism? If so, was it domestic or foreign? Was it ISIS opportunism with religious motivation or racial revenge by African Americans angry with the two killings of those two young black men this week, both deaths recorded on amateur video?

And what role will all this play in November’s presidential election? What will Donald Trump tweet? Does the United States have a race problem? A police problem? A gun problem? What will the National Rifle Association say? 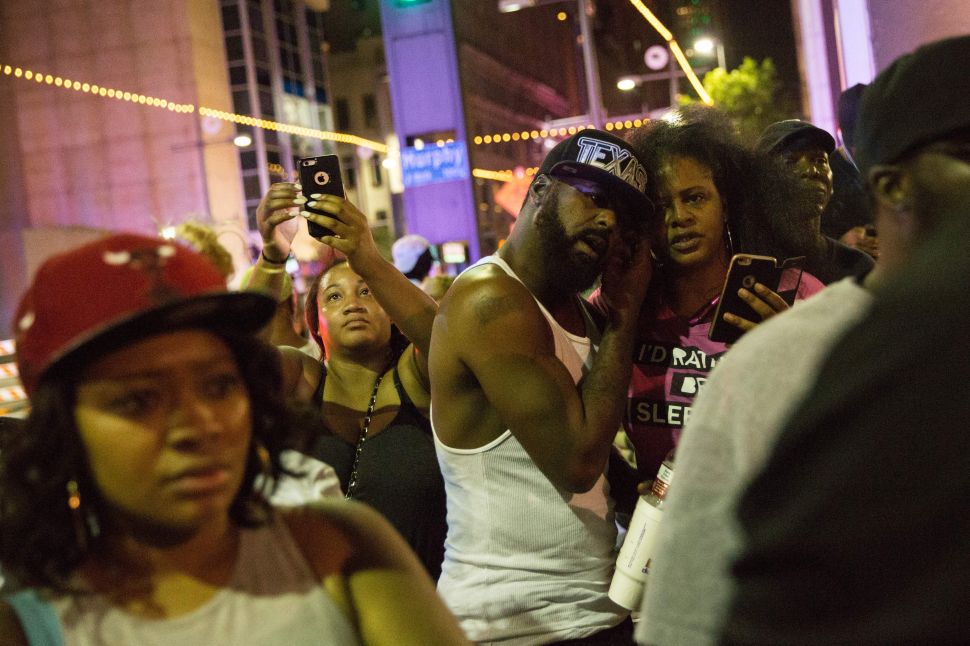