Thought the political silly season had long ended?  We have ourselves a pin controversy.

The North Carolina GOP’s twitter account lambasted Democratic vice presidential hopeful Tim Kaine last night for wearing a lapel pin depicting a flag—of the wrong country. According to the mistaken soul who runs (or ran) the North Carolin GOP twitter account, Sen. Kaine wore a Honduran flagt. This was not the case, as WNYT reporter Ben Amey pointed out.

Here's a screenshot of that @NCGOP tweet about @timkaine, since they deleted it. #DemsInPhilly pic.twitter.com/LbAywwnnob

That wasn’t the only pin-related news from yesterday’s Democratic Convention. Former president Bill Clinton was seen in the crowd at the DNC wearing a Hebrew “Hillary” pin, a gift from the National Jewish Democratic Council. It’s possible Clinton was sporting the pin as a rebuke to the protesters who burned an Israeli flag outside the convention the day before.

I just want to point out Bill Clinton is wearing a Hebrew "Hillary" (הילרי) pin tonight at the Democratic convention pic.twitter.com/ra4MwCjBEg

The pins of politicians may seem like silly little baubles, but for male candidates they represent the only rare opportunity to accessorize one’s, usually navy, wardrobe. Ties are typically red or blue: boring. But the lapel pin can speak volumes. We forget the pin’s versatility, because in recent years the lapels of American politicians have mostly served as real estate for American flag pins.

It wasn’t always the case. Truman wore a masonic pin, which would launch a million conspiracy theories today. 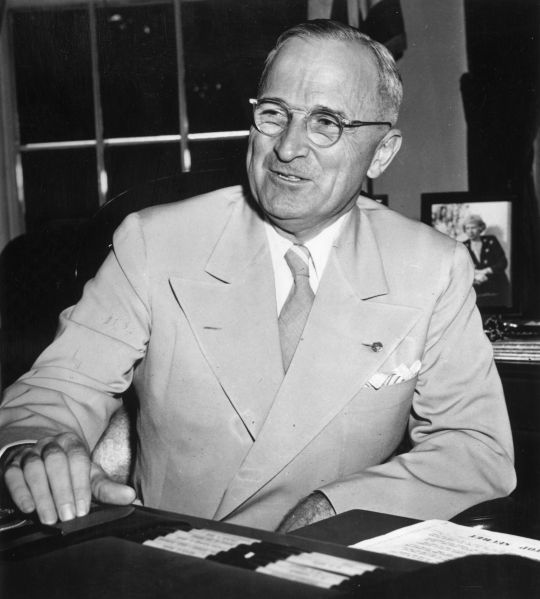 Lyndon Johnson wore a pin indicating he had won a Silver Star during World War II. His biographer Robert Caro called it “one of the most undeserved Silver Stars in history.” 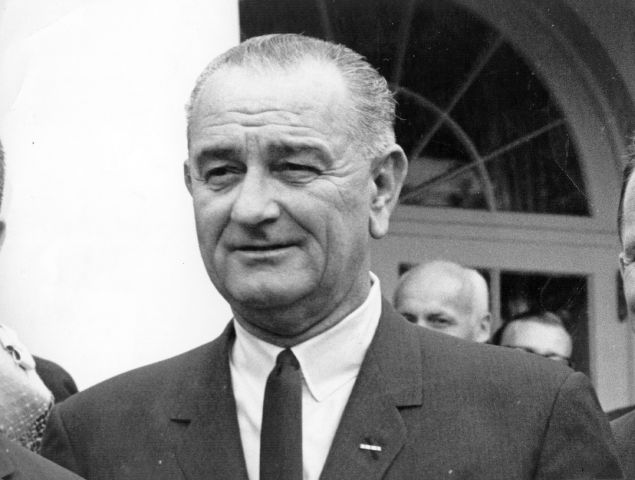 Richard Nixon was apparently the first president to wear an American flag pin, donning mini-Old Glory during the Vietnam War. Republican congressional candidates started wearing the pin in 1970 as a statement against anti-war protestors, according to a 2008 history of the flag pin published in Time. However, it was Robert Redford’s use of the pin in 1972’s The Candidate that gave Nixon’s chief of staff H.R. Haldeman the idea of affixing a flag to the presidential lapels. 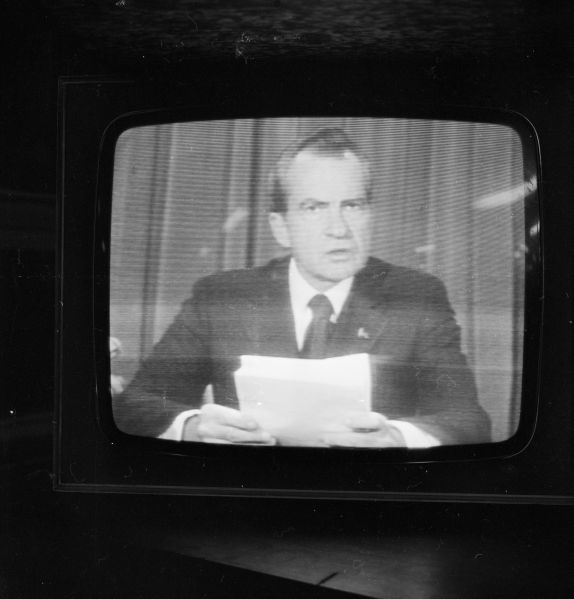 It seems Nixon and his scandals sullied the reputation of the American flag pin. For nearly thirty years, the lapels of American presidents and presidential candidates were mostly barren. 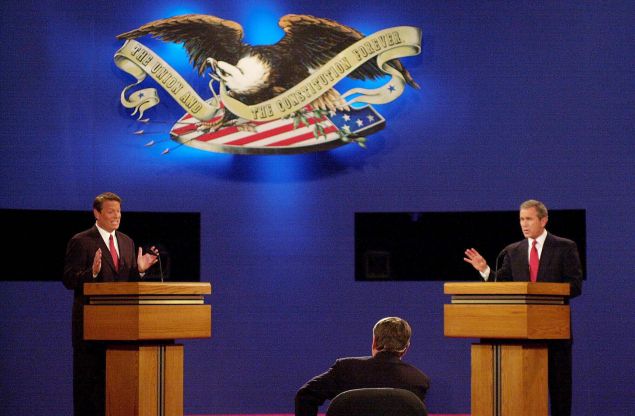 We didn’t know it then, but this was the last pinless presidential debate. (Photo: DON EMMERT/AFP/Getty Images)

The great national show of patriotism following 9/11 made flag lapel pins practically mandatory. George W. Bush reportedly ordered all his staff to wear them after the attacks. For many years, there was universal agreement across the political spectrum about the necessity of flag pins. Barack Obama was the first presidential candidate to challenge this consensus. In October of 2007, he was asked in Iowa why he didn’t wear a flag pin.

“The truth is that right after 9/11 I had a pin,” Obama said. “Shortly after 9/11, particularly because as we’re talking about the Iraq war, that became a substitute for I think true patriotism.”

Obama tried to fight against criticism of his naked lapels, but he eventually relented. By May 2008, the pin was back.

But the fever had finally been broken. Then Speaker of the House John Boehner didn’t wear one during the 2012 State of the Union. At the first 2015 Republican primary debate, only 10 of 17 candidates wore a flag pin. Bernie Sanders never donned one throughout his entire campaign, instead choosing to wear his understated gold Senate pin.

While the great pin consensus of the aughts might seem like a dark moment in the sartorial history of presidential politics, it has led politicians to think about lapels in new ways. Candidates became comfortable wearing pins over the last decade, but are now free from the stifling pin homogeneity of the Bush years. This combination allows them to choose pins, displaying their individual style and character. Newt Gingrich wore a pin displaying the blue flag George Washington’s troops flew during the Revolutionary War. Chris Christie, in a nod to both tradition and innovation, wears a flag pin shaped like New Jersey. 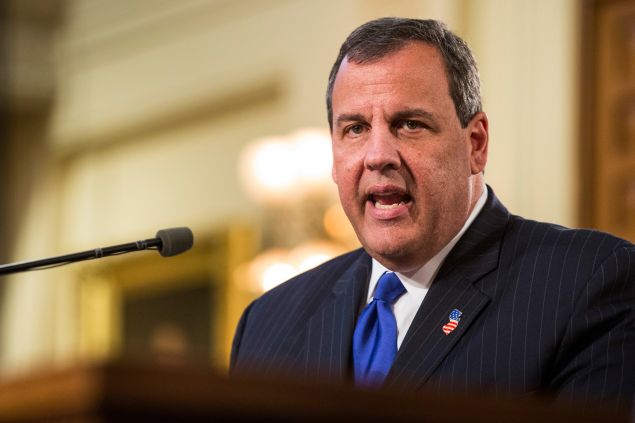 In politics, revolutionary ideas usually incubate at the lower levels of government before bubbling up to the presidential level. The same is true with pins. The future of the lapel pin currently serves in the House of Representatives. His name is Earl Blumenauer (D-Oregon) and his very existence is a slap in the face of pin convention.

Blumenauer wears a giant bicycle pin, an expression of his two-wheel passion. Of course, any discussion of pins in politics, presidential or not, would not be complete without mentioning Madeleine Albright, the first female secretary of state.

Albright’s pin game was so advanced, she even wrote a book titled Read My Pins: Stories from a Diplomat’s Jewel Box. Her pins were even displayed at the Smithsonian. 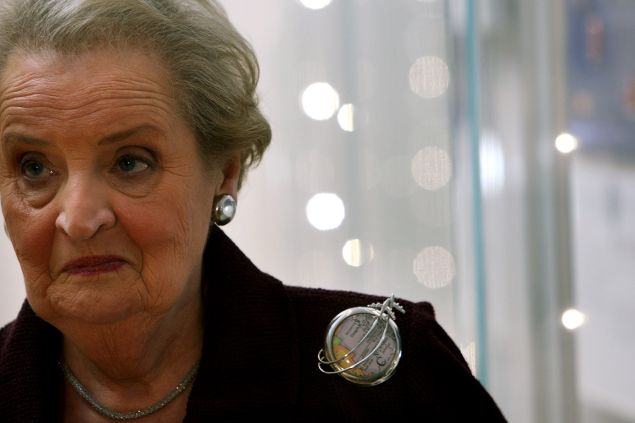 The veteran diplomat started wearing pointed pins, as she revealed to Smithsonian in 2010, in the aftermath of the first Gulf War when she served as the U.S. Ambassador to the United Nations during the Clinton administration. “The government-controlled Iraqi media,” recalled Albright, “compared me to an ‘unparalleled serpent.’ I happened to have a snake pin, and wore it to my next meeting on Iraq. When the press asked me about it, I thought, “Well, this is fun.” I was the only woman on the Security Council, and I decided to get some more costume jewelry. On good days, I wore flowers and butterflies and balloons, and on bad days, all kinds of bugs and carnivorous animals. I saw it as an additional way of expressing what I was saying, a visual way to deliver a message.”