PHILADELPHIA—In the shadow his late father’s famous address to the same group in 1984, Gov. Andrew Cuomo delivered a 15-minute ode to the progressive government that his father championed and that he’s often been accused of eschewing in favor of pragmatic centrism.

Tonight Cuomo said it was progressive government that worked in New York—pushing back on the idea that Democrats are “just dreamers” and insisting they were do-ers, too: from Franklin D. Roosevelt lifting people out of poverty to President Barack Obama providing 20 million Americans with health insurance.

“And Mario Cuomo was a dreamer too. But our progressive government is working in New York. We raised the minimum wage to $15, the highest in the nation, because we insist on economic justice. We enacted paid family leave because all workers deserve dignity. We are rebuilding our middle class and we are working hand-in-hand with organized labor, because the middle class is the backbone of this society. We are protecting the environment by banning fracking, because this is the only planet we have,” he said, continuing on to cite an assault weapon ban and marriage equality.

But even as he rattled off those policy victories, some Cuomo critics were undoubtedly rolling their eyes. Before championing a minimum wage hike this year, Cuomo had repeatedly dismissed the idea as unachievable when it was suggested by others. He has maintained good relationships with some unions, like the building trades, and sour ones with others—particularly teachers unions, who fumed when he sought to roll out evaluations. And while he boasted about banning fracking, it took a robust primary challenge from anti-fracker Zephyr Teachout to get Cuomo to budge on that topic.

Cuomo has long been accused by some in his own party for not being progressive enough, particularly for his close relationship with State Senate Republicans and his resistance to stumping for Democrats to take that chamber. But he’s spent much of this week touting the accomplishments he listed tonight, during a convention that has focused heavily on wooing left-wing Democrats who had supporter Vermont Sen. Bernie Sanders.

Tonight he argued Republicans had not offered solutions to the nation’s problems, only scapegoats—calling their policies targeting immigrations “divisive” and “delusional.”

It would be nearly impossible for Cuomo’s speech to live up to his father’s, which is cited as a masterful piece of American political rhetoric, sought to define the goals of liberalism and spurred speculation that he would run for president himself—something he famously mulled but never did.

Cuomo’s speech was delivered around 7:30 p.m. and last about 15 minutes. It was closer to primetime than the one delivered yesterday by Mayor Bill de Blasio, but while the arena was more crowded, many people in it seemed not to be focused on the governor’s remarks—though he seemed to draw more of them in as he continued to speak.

It differed from de Blasio’s several ways, most obviously in its focus on the policies of New York—something de Blasio avoided discussing, focusing instead on juxtaposing Hillary Clinton and Donald Trump. And while it took Cuomo a while to get say Clinton’s name in his speech, when he did he cited the time they spent working together when he worked at the Department of Housing and Urban Development—something de Blasio, also a former HUD employee and Clinton campaign manager, did not do in any detail.

But Cuomo closed out his speech not by speaking about Clinton, but about his father, whose message he called “timeless.”

“My father was the keynote speaker for this nation’s better angels, and he was beautiful. And tonight, Pop, wherever you are—and I think I know where—at this time of fear, please help his country remember what truly makes it great,” he said, with the crowd joining him for the last few words. “That we are one nation, under God, indivisible, with liberty and justice for all. 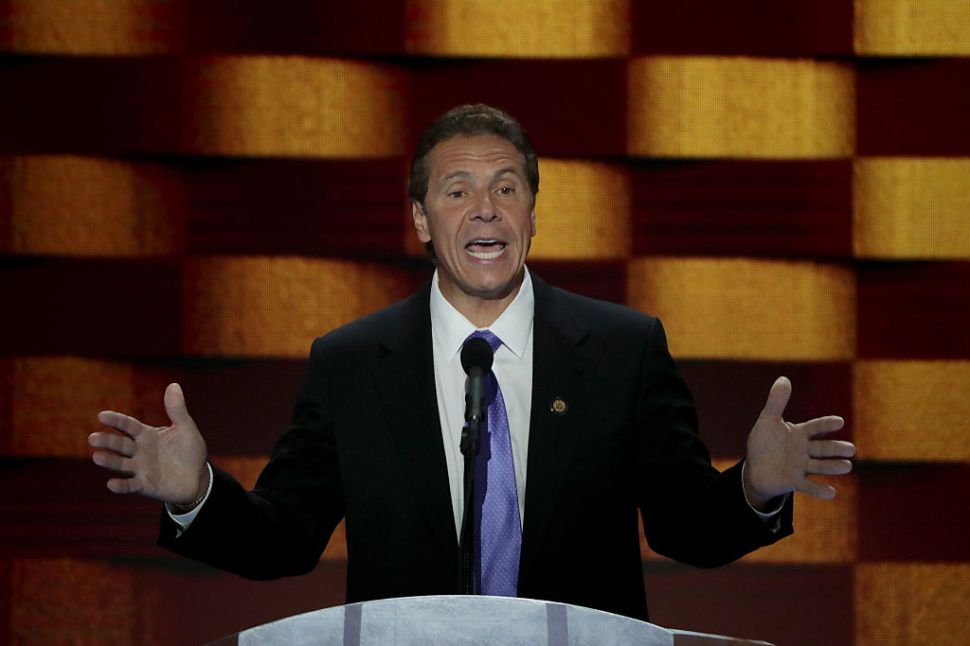