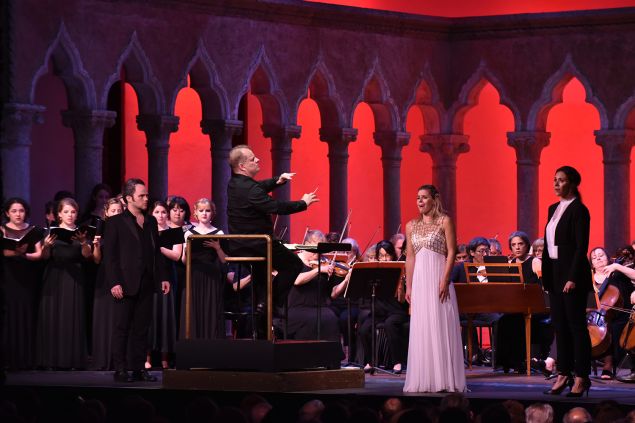 For New York opera fans, the eternal question—“What’s the weather forecast for tonight?”—grows even more crucial in the summer. That’s because it’s the season when the most interesting (or at least the most anticipated) operatic events transpire outdoors.

The more remarkable of last week’s two big shows was the always intriguing “Bel Canto at Caramoor” program, offering a full-scale concert performance of the obscure early (1813) Rossini opera Aureliano in Palmira. In fact, “full-scale” is something of an understatement, since the version of the opera given Saturday night was based on a new edition by Caramoor’s director of opera Will Crutchfield, which adds about half an hour of music to an already long score.

The resulting behemoth ran close to four hours, including a single brief intermission. Quite a few Katonah, N.Y., locals jumped ship at the halfway point of the balmy but humid evening, and even the doughty NYC opera fanatics who trekked up to Westchester on a shuttle bus earlier that afternoon were grumbling of fatigue by the time they were unloaded at Grand Central Station around 1:30 a.m.

The conventional wisdom on Aureliano is that it’s a pretty lousy opera.  This unfavorable impression seems justified by the fact that the opera was so infrequently revived after its first production that Rossini felt justified in raiding the score for spare parts. (At least three of Aureliano’s better melodies were later recycled into Il Barbiere di Siviglia.)

The Caramoor performance suggests this judgment on Aureliano needs to be revisited. True, the piece is dramatically inept. A basic flaw is that the most prominent role is assigned to neither of the piece’s leads—the soprano Queen Zenobia of Palmyra or the tenor Aureliano of Rome—but rather to Zenobia’s wimpy boyfriend Arsace. This role was created by the “last of the castratos,” Giambattista Velluti, whose superstar status meant he had to be given lots to sing even though the character doesn’t have much to say.

And yet Rossini did write some astonishingly lovely numbers for Arsace’s scenes, including a sequence of a prayer for the sheltering shepherds and a nostalgic lament for the young prince in the second act that would be highlights of any Romantic era opera. This and the rest of Arsace’s long role mezzo-soprano Tamara Mumford sang with melting lyricism with particular splendor in the many low-lying phrases taking her into the depths beyond low C.

Soprano Georgia Jarman is a long-time Crutchfield collaborator, mostly in lyric-coloratura roles as Gilda in Rigoletto, so it was a surprise to hear so big and vehement a sound in her Zenobia, not a girl but a warrior queen. Yet in more delicate moments, such as a descending ornament in triplets during one of the big ensembles, she retained filigree control.

Less successful was tenor Andrew Owens as the scheming Roman Aureliano. He ranted mightily and looked like a sexy James Bond villain, but his coloratura singing just missed that sense of arrogant virtuosity that can put over the second-drawer Rossini that makes up most of his part.

Crutchfield’s conducting was, as always, poised and crisp, with this year a slightly more mellow approach than in previous “Bel Canto” concerts, allowing more freedom for this singers to make the music breathe. The only complaint one could have was that Aureliano was too much of a good thing.

Yunpeng Wang was the most polished of the group, tossing off an effortless version of Figaro’s “Largo al factotum” as he strolled among the picnicking audience. Kang Wang was perhaps the most promising with a big, muscular sound that made even Alfredo’s lyrical aria from La Traviata sound heroic. And Bradley is surely headed for diva status with her confident stage presence and the luscious soprano she poured over arias from Louise and La Rondine.

She capped the evening with the final encore, which she introduced with a charming and very personal speech about the world’s current tribulations and the need for hope and faith to overcome our troubles. Then, as she sang the first phrase of the spiritual “He’s Got the Whole World in His Hands,” you could hear from all around that quick gasp of breath that presages weeping. By the time Bradley soared to a golden high D-natural in the song’s last verse, her sobbing audience was united in communal, cathartic emotion.

She had the whole park in her hands. 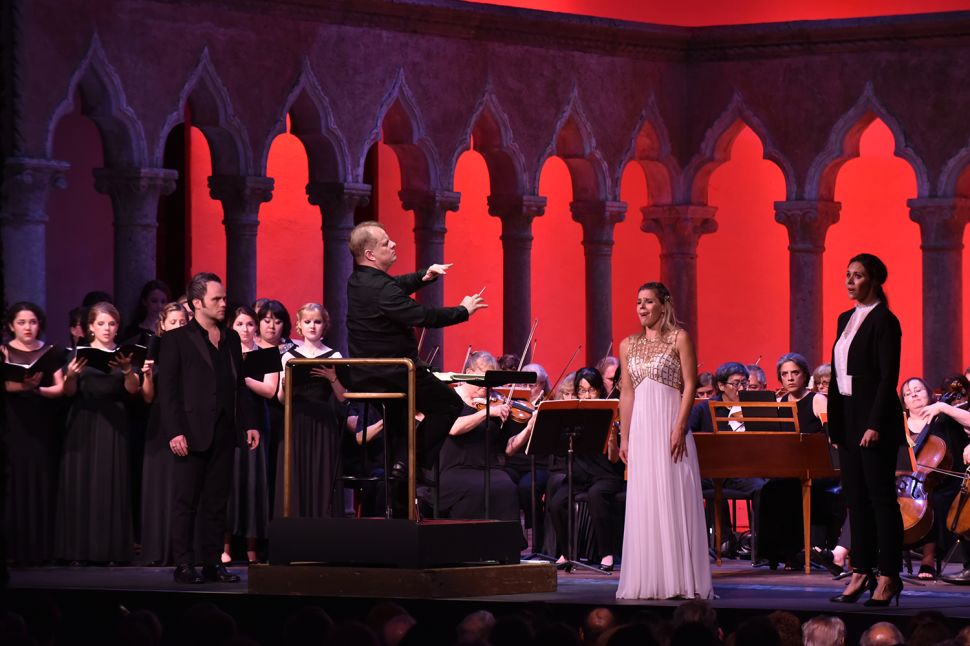