Last week I aired out my feelings on Frank’s behavior in the house and how inappropriate it was. My concern, aside from Da’vonne’s (and it turns out the rest of the women in the house) feelings, is that none of this was going to see the light of day. It’d be swept under the live feeds rug and never mentioned again. Well that didn’t happen. Full on, flamethrower, Frank got the edit he deserved. Seeing all of these incidents back-to-back like a Drake diss track, only reinforced it. Frank’s out here walking around with his little comments about the physical appearance of these women, he’s playing around too aggressively, both verbally and physically. Calling people sluts and hussies, tickling, touching, and roughhousing and then being like “what I do this all to my mom and my nana?” Cool, dude. Go back home and take a breather.

The main reason I think he needed to get kicked out is because of the butt slap compounded with the fact that Day had to accept his apology for game reasons. That’s above and beyond. He had her in tears, upset because she doesn’t want her daughter to see her treated like this on television and who can blame her? She felt violated. And now she has to pretend like it’s all good to keep her game going? That’s a double infraction. Yo Frank, quit with the Lenny Of Mice and Men act. You’re bigger and more aggressive than you realize. After the veto this week, Frank tried to do his run and jump celebration with Bridgette, someone who is actually half his size. Do you know when happens when you run and jump at a person with half the mass as you? You level them. Bridgette was on crutches the rest of the week for her ankle. Obviously, it wasn’t intentional, but I also think it’s not a coincidence. Rant over.

Every day of my life something happens on tv that makes me think “if I was good at photoshop or editing video, I’d make something fantastic.” Well, I’m not. I don’t know how to use anything except MS Paint, which is why my Austin jokes from last season look like this. But if I could, I would make a supercut video of Corey saying “I mean” and cut it together with Justin Bieber singing “What do you mean?” and then become the most famous person on Big Brother Twitter, which is lit by the way.

Bridgette won HoH and veto this week. She also screwed up her ankle and perhaps slightly escalated her relationship with Frank from “little sister” to “I’ll do whatever you want me to.” Frank wants Tiffany out so Bridgette nominated Tiffany and Paul. Then Frank secretly won the BB Roadkill, which was basically the memory game Simon with car horns, and nominated Bronte, a close ally of Bridgette. When Bridgette found out that Bronte got roadkilled, she was mad, not realizing that it was Frank who did it. Frank eventually told Bridgette what he did while they were cupcaking up in bed together. You’d think she’d be mad but what actually happened was that thing where you think someone is nice and innocent and their man is evil and then the curtain pulls back and you see they are even more devious. Bridgette was like in Mr. Robot when you think Tyrell Wellick is a psychopath and he is but then you meet his wife and think she’s going to be horrified at him for his behavior but she’s not and she turns out to be even more intense in a really calm way like a stab your pregnant self with a fork to throw off the cops way. Bridgette is like in Goodfellas when Henry gives Karen the burner and she’s like actually “it turned me on.” Bridgette cuddles up into Frank’s arms and is like “damn, Frank really knows best.”

Frank got his head gassed up and started going around the house talking about getting Da’Vonne out next but really all he was doing was reinforcing that he’s playing too hard and giving up too much info. He told Michelle, who is friends with Da, about his plan and then let it slip that Nicole was in on it. Da and Michelle brought it up to Nicole, who started sweating more than Pat Ewing at the free throw like. The house flipped harder than the two weeks of Team USA Olympic gymnastics we’re about to get in August and we got our second wonderful blindside of the season. Poor Bronte, she never stood a chance. Bronte’s take on the game has been so far off from reality, to quote the gawd Walter Matthau in Grumpier Old Men, “It must be nice living in Never Never Land, maybe I’ll come visit you one day when I need a break from reality.” Bronte aligned with Jozea and Victor, and Paul which was not ideal. She’s twice been nominated in the most pawn-way possible but has been convinced it is because Paulie is holding a grudge against her the entire time. And she for some reason thinks that her being a secret math nerd was worth keeping secret as a mega-reveal. Ronnie was also a secret nerd. Brendon was a rocket scientist. Michelle was a scientist, too. Doesn’t mean you’ve got game. Although to Natalie, knowing calculus feels like a huge secret weapon.

Speaking of Natalie, she said she’d date James in real life. I like the addition of the phone to the house just to watch James and Natalie reenact theTelephone Hour number from Bye, Bye Birdie every day. *Music begins*It won’t last. Not at all. He pranks too much. She’s too tall.

Tiffany demolished Frank with her eviction speech like she was those locals in Roadhouse with the monster truck and Frank was the car dealership. She called Frank “the dictator” and Bridgette “his Cabbage Patch Kid.” I never get why they don’t say names in these. It is abundantly clear who she is talking to. She also mentioned Frank’s “daily gas” which has to be the first time that’s ever come up in an eviction speech. Dude got dragged on live television. The vote was calculated so that Frank wouldn’t be able to tell who flipped. 5-4 for Bronte to leave. But, Paulie came through with another HoH win so Frank, Michelle, and Bridgette are all safe for the week. I have a feeling despite Paul’s best efforts; this week will not be filled with friendship. At least they got to eat some Outback Bloomin’ Onions. 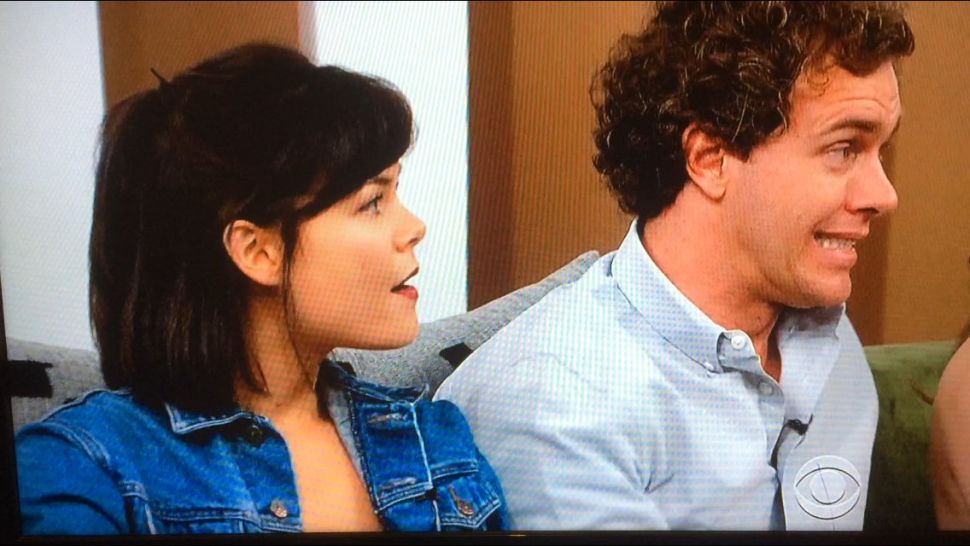