Few things can end a presidential candidate’s road to the White House faster than a calamitous moment on the campaign trail. You’ve seen them before—remember when helmet-donning Mike Dukakis’s rode a tank on the road to loserdom in 1988? Or the crazed screech that cost Howard Dean the Democratic nomination after the 2004 Iowa caucus? These pitfalls have a lot to do with a hearty 24-hour news cycle, but they also have much to do with the art of political stagecraft, the subject of Off Script: An Advance Man’s Guide to White House Stagecraft, Campaign Spectacle and Political Suicide by Josh King, a former advance man for the Dukakis/Bentsen campaign and former director of production for presidential events at the White House during the Clinton administration.

If presidential campaigns are a Hollywood film, advance men are what King calls “the producers of politics,” with the candidate playing “the leading role in front of the backdrop erected by the advance team.” With an election looming, King spoke with the Observer about candidate debacles of elections past, the Trump anomaly and the future of political optics.

Why does stagecraft matter so much in presidential campaigns? With the exception of Iowa caucus and the New Hampshire primary and the other early primaries and caucuses—or unless you’re a big donor who can pay big bucks to spend time with a candidate behind closed doors—almost all of the exposure we get to presidential candidates is through a medium. Most don’t make a habit of attending rallies. Few get to attend a candidate’s intimate ‘roundtable’ with ‘real voters.’ And yet, all of these events happen every day in a different part of the country. Who attends all of them them? The media. They write about them. Photograph them. Videotape them. And they they ‘package’ them for us to see. Political stagecraft is simply putting forward the best possible image for the intermediaries—the press—to view, interpret and redistribute it to the masses.

When it comes to campaigning, you’re somewhat of the “man behind the curtain,” pulling levers and pushing buttons to create the image we see for some of America’s most popular presidents. Why draw back the curtain on the inner workings of advance work? My book tries to pull back the curtain on the whole process of modern campaigning and governing, so much of which is staged for the lens. Advance people contribute to that, of course, but so too do speechwriters, pollsters, producers, photographers and reporters as well, in addition to the candidates themselves. There’s no deficit of books by all of the players in that process, with the exception of advance people, who haven’t had a book written about their work since Jerry Bruno, one of JFK’s advance men, collaborated with Jeff Greenfield on The Advance Man back in 1971. Many of us who’ve worked in this field have often mused about getting it down on paper, but whether there’s been some unwritten omertà prohibiting it, or maybe just because long-form writing hasn’t been the primary vocation of advance people, there’s been a 45-year gap in the canon of the trade. I thought that if I could write a balanced book about the stagecraft of six Democrats and six Republicans, and their behind-the-scenes advance people, then it would finally be time to offer readers an update on Jerry Bruno’s world.

You call the era from 1988 to the present “the Age of Optics”–beginning with Dukakis and the tank and continuing through the Obama administration. Why use this term? During the presidencies of Gerald Ford, Jimmy Carter and Ronald Reagan, news gathering made the transition from film to video, rapidly accelerating and enhancing the ability of network newscasts to produce and edit short visual stories about a candidate or politician’s day. They called it ‘the package,’ and they often aired for two minutes or so at the top of the evening news. Reagan, advanced by his deputy chief of staff, Michael Deaver, recognized the power of providing visuals to support his message, and so the pressure was on the Republican and Democratic candidates of 1988 to rise to that level of sophisticated visual storytelling. Massachusetts governor Mike Dukakis tried to do that on September 13, 1988, when he rode in an M1A1 Abrams Tank in Sterling Heights, Michigan and, for a variety of reasons, it backfired miserably. Since then, trying to rise to the level of Reagan, while steering clear of the snafus of Dukakis, has come to embody the tensions of the Age of Optics.

In your book, you point out that political visuals are most damaging when they feed into preconceived notions about a candidate’s weaknesses. With debacles as damning as Dukakis’, can a candidate ever recover from a campaign disaster? Yes. Bill Clinton did it in unique fashion in 1988. At the Democratic Convention in Atlanta on July 20 that year, he was called on to put Mike Dukakis’s name in nomination. What was supposed to be a 15 minute speech clocked in at about 35 minutes, eliciting a chorus of catcalls from the delegates. He was widely lampooned for his long-windedness and needed serious damage control. He made his way across the country to Burbank, California to appear on “The Tonight Show” with Johnny Carson to make amends. When the governor was introduced on set and plopped down next to Carson, the host pulled out a jumbo hourglass from beneath his desk. The audience guffawed as the steady stream of sand served as a timekeeper for Clinton’s segment, a visual deterrent to filibuster. The stunt worked, for Carson and Clinton. Four years later, Clinton himself was the Democratic nominee, his widely-panned failure in Atlanta fully vindicated.

What can today’s politicians learn from past candidates like Dukakis and Kerry who have experienced catastrophic moments due to poor advance work in their campaigns?

Every campaign is different. Every success that candidates celebrate is rooted in the unique circumstances of the candidates and their time on the stage, and in the media that covers them. In each instance [referencing Dukakis and Kerry], aides with training in advance work had cautioned about the potential disastrous repercussions of their candidate’s planned forays, but the candidate or their campaign didn’t listen. In Dukakis’s case, he tried to be someone he wasn’t—a general in the mold of George S. Patton. In Kerry’s case, he was being who he was— a wealthy sportsman engaging in an activity that played into the evolving narrative about him. Running for president is an 18-month long-running stage show where the highest stakes are involved every day, whether actively campaigning or not. Today’s politicians, and their staffs, are haunted by these lessons and need to guard the image and brand of the candidacies until the last votes are cast on election day.

In the last section of the book, you talk about “The New Age of Optics” and include some examples of both Hillary Clinton and Donald Trump on the road. In what ways is this new breed of politician different from say Bill Clinton and President Obama? Bill Clinton and Barack Obama are naturally gifted politicians who followed a traditional script on their path to the presidency. The opponents each man faced on route to victory defined many of the tactics they used, and Obama learned a lot from Reagan, Clinton and George W. Bush in refining and deploying the traditional tactics. Secretary Clinton is also following a mostly traditional script, but she’s now facing a non-traditional opponent, asymmetrical in almost every way. The battle between Secretary Clinton and Trump is playing out on social media in a way that Bill Clinton never faced and Obama was just beginning to master when he was first elected. A candidate like Trump has never advanced so far in a presidential campaign in modern memory. The test in the summer and fall of 2016 is whether the traditional tactics of campaigning can successfully square off against a candidate who has redefined the rules.

To prevent that snafus that resulted in the surreptitious recordings of Barack Obama in 2008 or Mitt Romney in 2012, one unenviable task that advance people are regularly required to do at closed door events is to sequester the cellphones of participants

We’ve seen Trump flip the script on advance work this election cycle by speaking without a script and rarely taking advice from campaign consultants, and the polls show that his supporters love him for it. Why has he been so successful? This is the great challenge for Trump. What got him to this point—something no one, except maybe himself, thought possible—may not get him to victory in November. I give him full credit for how far he’s come, and books will be written about his tactics from June 2015, when he announced his candidacy coming down the escalator at Trump Tower, until July 2016, when he’s ready to accept his party’s nomination. But he seems to know he has to change, and he’s also struggling with that. He regularly lampooned President Obama and Secretary Clinton for using a teleprompter, but has rolled it out every time he needs to deliver a serious message.

The results are far more mixed than when President Obama takes the stage. Rallies are an age-old tool in a general election campaign. Sending tweets are a newer weapon that Trump has pressed into service. But running for president and, more importantly, serving as president, requires far more than that. For 15 seasons, Trump played his role perfectly on “The Apprentice,” and won a huge following for it, but the perfection of those episodes was honed in the editing suite under the direction of Executive Producer Mark Burnett and his team. On the campaign trail, and in the White House, there’s no crutch of post-production to edit out mistakes.

How do you think the role of the advance man will change in 5, or even 10 years from now? The high mark for advance people, in my view, came in 2004, before the emergence of YouTube, Facebook, and Twitter. Back then, you were working to produce one great visual per day, and there were only a few angles from which those visuals could be shot. For the decades before then, advance people operated on a long leash, largely liberated to be as creative as possible on the road. Now, everyone with a cellphone can become a photojournalist, their images and videos instantly uploaded into the day’s discourse. For that reason, the advance person now has a new job at campaign events: as confiscator. To prevent that snafus that resulted in the surreptitious recordings of Barack Obama in 2008 or Mitt Romney in 2012, one unenviable task that advance people are regularly required to do at closed door events is to sequester the cellphones of participants. That’s a far cry from the ‘producers of politics’ creative ideal that first drew me to advance work in 1987. Unfortunately, it’s the latest chapter in the Age of Optics. 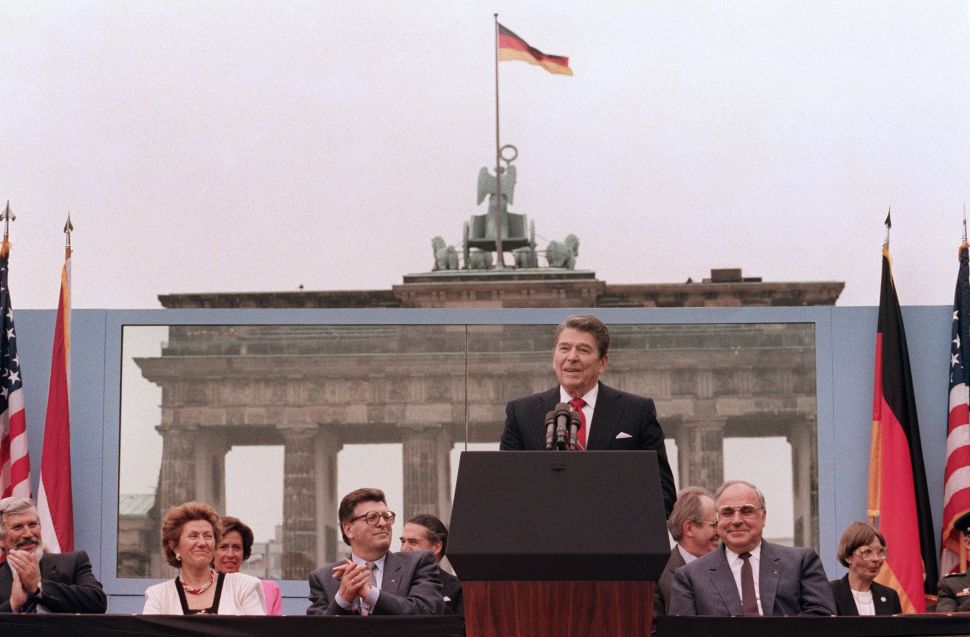