After taking the stage at the Democratic national convention in Philadelphia during the 9 p.m. hour Thursday night, basketball hero Kareem Abdul-Jabbar began with a light-hearted, slightly racial joke about his support for presidential candidate Hillary Clinton.

“I’m Michael Jordan and I’m here with Hillary,” Abdul-Jabbar said. “I said that because I know Donald Trump couldn’t tell the difference.”

But the biggest difference, stressed by Clinton and most speakers Thursday, is that there is a clear choice between the optimistic Clinton and the pessimistic Trump, who is the Republican candidate, nominated last week at their convention in Cleveland.

“A man you can bait with a tweet,” Clinton said, “is not a man you can trust with nuclear weapons.”

On HBO a few minutes later, comedian Bill Maher said on Real Time of Clinton “I thought it was a pretty good speech. Of course, we won’t know for sure until Donald Trump tweets about it.”

Sure enough, less than an hour after Clinton finished her acceptance speech as the first female candidate nominated by a major party, Rachel Maddow on MSNBC was reading Trump’s freshest tweet on Twitter.

“Hillary’s vision is a borderless world where working people have no power, no jobs, no safety,” Trump wrote. “No one has worse judgment than Hillary Clinton. Corruption and devastation follows her wherever she goes.”

Hillary's vision is a borderless world where working people have no power, no jobs, no safety.

No one has worse judgement than Hillary Clinton – corruption and devastation follows her wherever she goes.

“So he’s really going with the sunshine kind of theme,” she said.

The night-long buildup to Clinton’s appearance was covered thoroughly on MSNBC, CNN and the Public Broadcasting System.

It included gripping speeches by Gen. John Allen, former Michigan Gov. Jennifer Granholm, Rev. William Barber II and by family members of police officers killed in the line of duty. Another speaker was Khizr Khan, the father of a Muslim-American soldier who died in Iraq.

If it were up to Trump, Khan said, his family would not even be in America. Trump has proposed an indefinite ban on Muslims entering the country.

“Donald Trump . . . have you ever read the United States Constitution?” Khan asked, taking a copy of it out of his pocket. “I will gladly lend you my copy.”

Overall, it was a well-produced spectacle with a sharp and clear point of view. But you wouldn’t have seen and heard Abdul-Jabbar and all the rest if you watched Fox News Channel Thursday night. They tried to avoid almost every speaker until Chelsea Clinton introduced her mother.

Instead—from 8 p.m. to 10 p.m.—Bill O’Reilly and Megyn (rhymes with “Reagan”) Kelly trotted out the usual right-wing themes that back the radical and reactionary Trump and promote the Fox News worldview.

Shortly before Clinton attacked the gun lobby in her speech, Kelly showed a 30-second commercial by the National Rifle Association. It aired free of charge, part of a “report” about women who need guns to prevent rape. The NRA has endorsed Trump.

‘You know she means it, because she’s wearing a lab coat.’

In the previous hour, O’Reilly talked often about himself, as is his habit, but also made time for his flunky, Jesse Watters, who stalked and baited Democratic delegates like Keith Boykin, who worked for President Bill Clinton in the White House.

Even with Fox’s manipulative editing, Watters didn’t win every exchange, like this one about how “illegal aliens” are murdering innocent white women in “sanctuary cities.”

WATTERS: “A lot of people are being murdered in sanctuary cities by criminal illegal aliens who should’ve been deported or locked up.”

BOYKIN: “My impression is there are not a lot of people who are being murdered by people in sanctuary cities. But a few isolated instances are being blown out of proportion.”

So Fox has not changed much in the week since its emperor, Roger Ailes, was fired amid multiple allegations that he was a serial sexual predator who exploited women who worked for him. As is often the case at Fox, they reveal their agenda not only by what they show but also by what they avoid.

Fox missed most of General Allen’s speech but couldn’t duck a stinging comment he made in a taped interview with Kelly. He objected to Trump’s promise to use the American military to torture suspected terrorists and to kill innocent members of their families.

“We’re putting ourselves on the edge of a civil-military crisis that we’ve never seen before in this country,” Allen said. “We don’t need to go there.”

But Fox did score an exclusive telephone interview with Trump, who called Greta Van Susteren during the 7 p.m. hour Thursday.

Most opposition candidates have the grace to keep quiet during the other’s convention. Not this rookie pol, who was asked about the “dark” theme of his gloom-and-doom acceptance speech last week.

“The haters, yeah,” Trump said. “They said it was ‘dark.’” After Trump called Van Susteren “a great and talented anchor,” she still grilled him, asking him why he doesn’t reveal his tax records for years in which he is not being audited.

All other modern presidential candidates have done this. But not this rookie pol.

“I’ll be honest,” Trump lied. “Most people don’t care about it. The only ones that care are certain people in media. I’ve had very, very little pressure.” Then Van Susteren ceased her interrogation.

“Let me ask you a couple soft questions,” she began.

Speaking of Trump and the news media, he continues to deny press credentials to The Washington Post and got into a word battle at a press conference Wednesday with Katy Tur of MSNBC, who asked him about his urging the Russians to hack Clinton’s emails.

TRUMP: “They probably have them. I’d like to have them released.”

TUR: “Does that not give you pause—”

TUR: “—to have a foreign government—”

TRUMP: “Hey, you know what? Gives me more pause that a person in our government, crooked Hillary Clinton—”

TUR: “What if it was someone else not her?”

TRUMP: “Be quiet. I know you want to save her.”

Trump’s tone was reminiscent of that used on Jorge Ramos, early in the campaign.

“Go back to Univision,” Trump told Ramos after refusing to answer his question and ordering him evicted from the room.

At least Fox will defend Trump from left-wing smears that he is a racist and a sexist. Fox knows what it’s like to be picked on. Just listen to O’Reilly, Fox’s ratings king and one of Trump’s best buddies.

O’Reilly took heat this week for recalling how well-fed and well-housed the enslaved African-Americans were when they built the White House at the dawn of the 19th Century.

“The time has come now where this whole network’s going to have to band together, all of us, and we’re going to have to call out the people who are actively trying to destroy this network by using lies, and deception and propaganda,” O’Reilly said, early in the week. “We’re going to have to start to call them out by name because that’s how bad it’s become . . . It’s getting to the point of danger.”

Oddly, despite his vow to name names, O’Reilly refused to use the name of Maddow when he criticized her for her reaction to Bill Clinton’s speech. During her criticism, Maddow seemed annoyed that Bill recalled Hillary as a “girl” when they met in college.

Or, perhaps Maddow disliked how Bill tied Hillary’s story to his own ascent to the White House.

Noting that his bobo Watters was cursed by a photographer at the convention, O’Reilly said: “This is provocation. These people are doing this, they want me dead. Literally dead.”

Might O’Reilly’s style of paranoia grow out of fashion at Fox as it evolves without Ailes and with Rupert Murdoch and his two sons overseeing things?

There are signals that Fox might move off the right-wing fringe and more toward the center. For one, Clinton has consented to an exclusive interview with Chris Wallace to air on Fox News Sunday.

Brian Fallon, the spokesman for the Clinton campaign, told Kelly Thursday night “We’ve had an increasing presence on Fox.”

When Kelly pressed him for a Clinton interview, Fallon replied: “I have to assume an appearance on The Kelly File is just around the corner.”

Clinton praised Kelly as a good journalist last year after Trump attacked her for her aggressive questioning of Trump regarding Trump’s degrading, gender-specific insults about women.

Kelly, playing out her Fox contract, may be feeling what The New York Times called a chill around the network since Ailes left.

“Megyn Kelly and her co-hosts, including Bret Baier and Brit Hume, have not been speaking during commercial breaks,” The Times reported, citing anonymous sources.

Early in the week, Kelly stopped by a CNN party, presumably finding the atmosphere warmer than that at the Fox campus. Some of her colleagues resent how she spoke to the outside law firm investigating the Ailes allegations.

Kelly, in turn, told colleagues she was disappointed that women like Van Susteren and Kimberly Gilfoyle pre-judged Ailes as innocent before the investigation began.

It was triggered by a lawsuit against Ailes from Gretchen Carlson, an anchor and former Miss America who was ousted by Ailes last month after, she said, she refused his sexual demands. Perhaps it was just a coincidence that Carlson called for gun safety legislation just days before her departure.

It makes one yearn for the days of The Colbert Report on Comedy Central, when Stephen Colbert played the role of a Fox-like anchor, cocksure in his biases and proud of his ignorance.

A new version of the Colbert character appears on The Late Show on CBS and on Thursday he showed a clip of Clinton accepting the nomination while wearing a white pants suit.

“I believe in science,” she said.

“You know she means it,” Colbert said, “because she’s wearing a lab coat.”

Regarding Trump’s “sarcastic” suggestion that Russia spy on Clinton, Colbert said: “Now, encouraging a hostile foreign government to influence our election is an unorthodox campaign strategy, known in political circles as ‘treason.’”

On HBO, Maher summed up two weeks of TV spectacle by riffing off Clinton’s “I’m With Her” slogan. 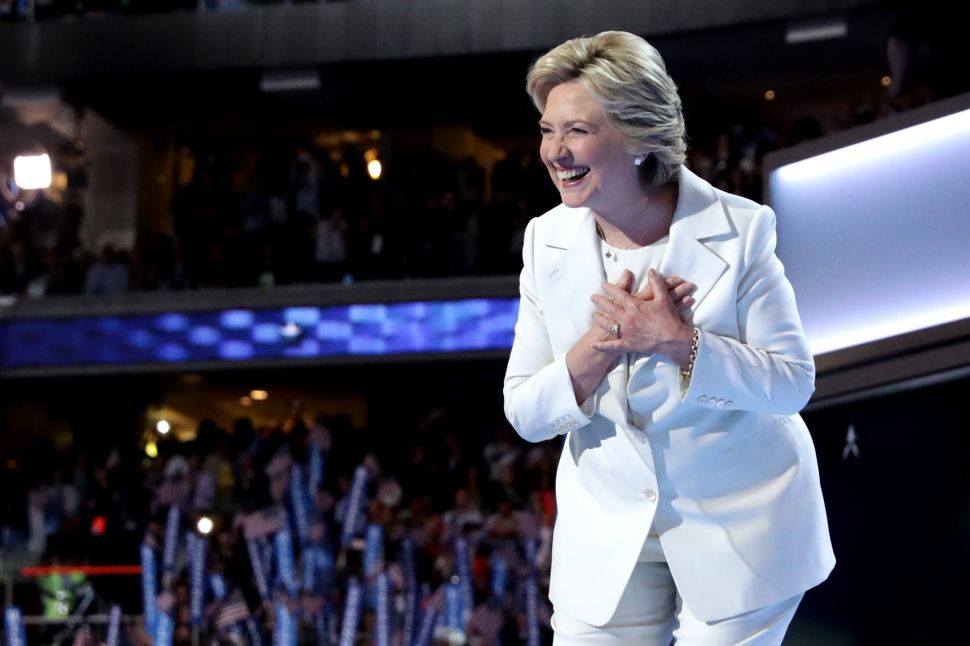