PHILADELPHIA—Michael Bloomberg came to the Democratic National Convention tonight to fire the first shot in the battle of the billionaires.

The former New York City mayor, independent politician and self-made billionaire delivered a speech that attacked Republican nominee Donald Trump in all the ways that are sure to infuriate him—hitting the businessman for the management of his companies, impugning his economic chops, needling him for needing money from his father to start his fortune, and presenting him as a mere imposter among the businessman-turned-politician class.

“Trump says he wants to run the nation like he’s run his business. God help us,” Bloomberg said. “I’m a New Yorker, and New Yorkers know a con when we see one.”

In urging independent voters to elect Hillary Clinton, he spent more time on Trump. He slammed the candidate for promising to punish companies for outsourcing jobs while making his company’s clothes overseas; for working around the visa system to hire temporary foreign workers at low wages; for promising to deport 11 million undocumented people but hiring them to work on his own projects.

“What’d I miss here?” Bloomberg asked. “Truth be told, the richest thing about Donald Trump is his hypocrisy.”

There was reason to question how Bloomberg might go over with the crowd, particularly with the convention’s focus on wooing former Bernie Sanders supporters—who are not quite keen on billionaires. When his name was first announced, there was a smattering of boos, but Bloomberg seemed to win over the crowd by seeming to every other sentenced with a pointed joked or barb about Trump.

His speech was different from those delivered by others tonight not just because he was the only one with enough cash to criticize Trump from the perspective of an even richer person—it featured much less Clinton cheerleading. He praised her leadership after September 11 but said little else about her specific achievements or policy goals. Instead, he presented her as the only rational choice—urging the crowd to “unite around the candidate who can defeat a dangerous demagogue” and earning even bigger applause near the end of his speech when he asked the crowd to elect “a sane, competent person.”

“I know that Hillary Clinton is not flawless—no candidate is. But she is the right choice, and the responsible choice, in this election,” Bloomberg said. “No matter what you may think about her politics or her record, Hillary Clinton understands that this is not reality television. This is reality.” 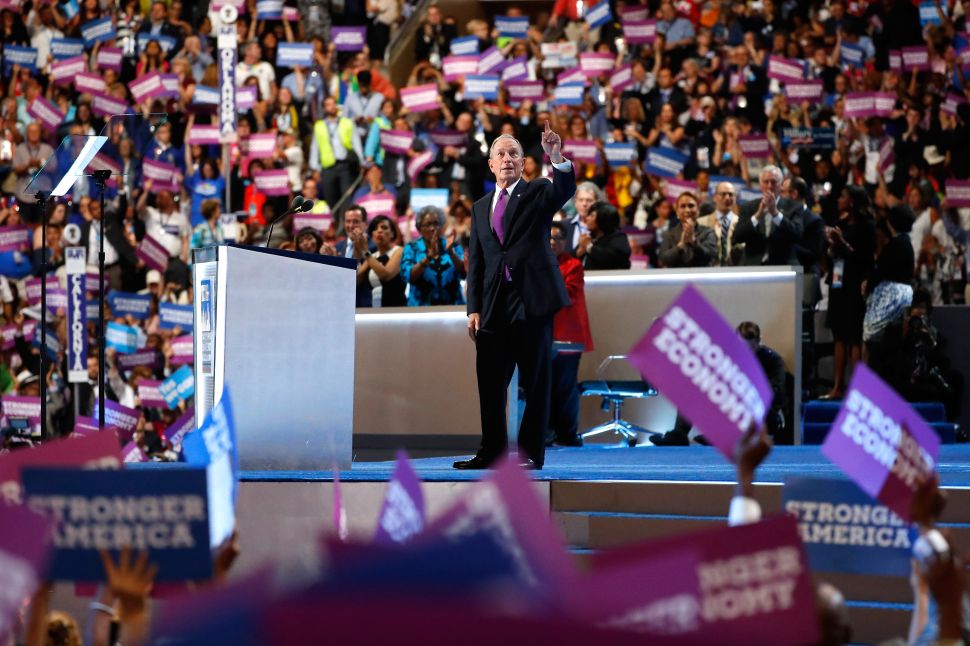