On July 24 Hillary Clinton’s campaign manager Robby Mook carefully avoided naming his sources when he told when he told ABC’s “This Week” host and former Bill Clinton administration aide-de-media George Stephanopoulos “It’s troubling that some experts are now telling us that this was done by the Russians for the purpose of helping Donald Trump.”

Mook’s this was a cache of some 19,000 emails and associated documents stolen from a Democratic National Committee server and released on July 22 by Julian Assange’s highly-suspect hack-and-intimidate operation that goes by the nom de guerre Wikileaks.

Though Mook provided no proof that Russian agents committed the crime, he clearly painted Russia as an American adversary acting with malign intent. He then yoked Republican presidential nominee Donald Trump to Russia’s neo-Czar Vladimir Putin: “I think that what’s troubling is how he (Trump) praised Vladimir Putin,” Mook said.

Mook provided no proof that Putin favors Trump over Hillary Clinton nor did he quote anything Trump has said about Putin that would indicate Trump is a Putin puppet.

Mook’s statement had elements of a “circular cause and consequence” fallacy, where the author of the statement claims the consequence of the an action or phenomenon is its root cause. It’s not a precise example, but my translation of Mook’s innuendo illustrates the point: “George, buddy, like, this document dump damaged hell out of my candidate and your pal, Hillary. I mean, you’ve donated to the Clinton Foundation. ‘Some experts’ say Russia did it. Naw, I’m not gonna say who, but, man, you hurt Hillary then you help Trump. Therefore Russia did it to help Trump. That’s what I’m sayin’.”

McCarthy also claimed “I have here in my hand a list of 205 . . . a list of names that were made known to the Secretary of State as being members of the Communist Party and who nevertheless are still working and shaping policy in the State Department.”

As History.com notes, “insinuations of disloyalty,” connivance with Stalinist Russia  and unsubstantiated accusations of treason were Tailgunner Joe trademarks. That McCarthy, the premier figure in the great 1950s Red Scare, became a ritual target of left wing Democrat hyper-ventilation and fear-mongering enriches the irony of Democrat Mook’s dishonest ad hominem assault. Who’s the Tailgunner here, Robby? You—or your boss, Hillary? You know she cleared everything you said on Stephanopoulos’ Clinton-friendly platform. (Many of us believe George wouldn’t have a national TV gig if it weren’t for his Clinton Administration service.)

We now know Russia is an adversary. Democrats didn’t always agree with that.

In the midst of another scandal bred by Bill’s misogyny, Hillary decried a “vast right-wing conspiracy.” Yes, the trope of deep conspiracy—definitely a McCarthyite echo but during the Monica scandal major media just wouldn’t call Hillary on it. You and your boss have revived the trope, Robby.

Mook did not want to discuss the emails’ contents. The authentic emails prove the DNC sought to stymie Bernie Sanders’ campaign. The system was rigged. The angry reaction of Bernie Sanders-supporting Democrats had shaken the Democratic Party. A split was emerging that threatened Hillary’s coronation.

That was Mook’s immediate political problem—the threat to the convention. He had to deflect from the damaging content. Attacking Trump was a deflection, but implying Trump was in league with a foreign enemy was a sensational deflection.

Robby Mook’s decision to go for sensational deflection tells me he’s from that class of political operatives who believe everything is political. No Robby, everything ain’t political—not in the self-serving, personal and tactical sense of the word your “This Week” shenanigans displayed.

The hack and the calculated timing of the documents release are a serious national security problem—a major political threat in the grand sense of threat to the body politic. The problem they represent is in the same serious league as Hillary’s rogue email server and her grossly negligent mishandling of classified national security information.

So, Robby, those of us fighting for truth insist on revisiting that issue.

Poor security may have permitted the DNC hack—a form of gross negligence. Will you overlook your staff’s gross communication security negligence as blithely as Jim Comey ignored Hillary’s criminal negligence?

Think about it. Mook’s smear of Trump all but admits motivated American enemies hacked Hillary’s server and obtained classified information.

In an essay published July 24, Bill Kristol sketched a troubling pattern of business connections between Trump and Russian interests. Kristol said they should be investigated and he’s right.

I’m prepared to believe the hack of the DNC computer was an act of cyber war, an act of malign geo-strategic finagling by Russia or other American adversaries. This supposition must be soberly considered and thoroughly investigated. Identifying the hack’s perpetrators matters as well as determining their long-range intent. If intelligence analysis connects the hackers to a nation state or terrorist organization or criminal organization, then punitive action is justified.

John Schindler’s Observer essay was one of the first to examine with a professional eye Russian intelligence meddling and the DNC hack.

He believes Russian agents are culpable:

“Russian hackers working for the Kremlin cyber-pilfered the DNC then passed the purloined data, including thousands of unflattering emails, to Wikileaks, which has shown them to the world.”

Schindler gets credit perceiving early-on Assange’s “affection for the Kremlin and its intelligence agencies.” He convincingly argues that Wikileaks covertly connects to Russian intelligence:

“In truth, to anyone versed in counterintelligence and Russian espionage tradecraft, Wikileaks has been an obvious Kremlin front for years, and it’s nice to see the Democrats and their allies in the mainstream media suddenly come around to this view.”

Bottom line, Schindler says, “Wikileaks  should be treated as the front and cut-out for Russian intelligence.”

Michael Ledeen has also weighed in with a cool analysis.

Ledeen argues that the “…penetration of the DNC is almost certainly part of the larger story of Hillary’s use of an insecure private server. That server was apparently first discovered when ‘Guccifer’ penetrated Sidney Blumenthal’s email account. He had many exchanges with Hillary, and Guccifer found them. That led him to Hillary. And once you’re in Hillary’s server, you can be sure that there are links to the DNC.”

Ledeen also speculates on Guccifer’s connections to Russian intelligence and notes that the DNC files may “have been manipulated.” He isn’t as certain as Schindler “this is all Putin’s doing” and wonders if meta-data in the documents indicating Russian involvement are a “false flag” operation. But we don’t know yet. We need to find out. And when we do, unlike Jim Comey, we need to bring the full force of the law to bear.

Well, there is an upside. We now know Russia is an adversary. Democrats didn’t always agree with that. It you’re fighting for truth in the War on Honesty that demands a look back to the 2012 campaign. Recall Barack Obama dismissed Mitt Romney’s astute comment that Russia is still a major geo-political foe.

Yes, you have to slog through Obama’s snarky misrepresentation of Romney’s statement before Romney sets him straight—but the video clip is damning.

Let’s also remember our president was also overheard asking then-Russian President Medvedev to tell Vlad that after the election he’d have more flexibility.

Right there, Robby. So, on behalf of truth, would you please tell us who has empowered Russia?

Look back to the Obama Administration’s “re-set” of relations. I call your attention—and Stephanopoulos’ attention—to September 2009 and Obama’s unilateral decision to undermine a carefully planned NATO agreement to deploy anti-ballistic missiles and supporting radar systems to Europe.

Yes, Robby, Obama didn’t just shoot his mouth, he undermined a NATO agreement, and did so enthusiastically. Note he made his announcement on  September 17, the 70th anniversary of the day Stalin’s Russians invaded Poland from the east. Have you heard of World War II, Robby? At that moment the Poles were battling the Nazi attack from the west and north. Obama’s stupid diplomacy and damn fool timing appalled the Poles.

In retrospect, President George W. Bush’s decision to help Georgia in August 2008 starts to look good. Putin’s boys were conducting an early version of their creeping war of aggression operation. Bush’s decision to airlift Georgian troops from Iraq to Georgia stabilized the situation. The slow Russian invasion halted. Then Putin began relentlessly accusing the Bush Administration of warmongering. He echoed Democratic Party smears of Bush—belligerent, incompetent, a man lacking vision, “Bush Lied, People Died,” etcetera. The attacks on the Bush Administration made Putin something of an Obama ally during the latter stages of the 2008 campaign. Were you aware of that, Robby Mook?

Barack’s and Hillary’s subsequent Russia policies were supposed to have improved U.S.-Russia relations. Did they, Mook?

Well they were re-set, but not in a way favoring peace and democracy. These are the historical facts. In 2014 Putin invaded and annexed Crimea and the attacked eastern Ukraine. In so doing he broke an accord signed by Bill Clinton in 1994.

Putin waged and continues to wage an imperial war. Russian aircraft buzz NATO aircraft and ships on a routine basis.

Putin is in charge, Robby. His actions demonstrate he has “more flexibility,” after seven years of the Obama Administration.

That’s the context for 2016’s dangerous Russia and its possible finagling in the U.S. election. In 2012 Mitt Romney recognized the Russian threat. To say otherwise is to wage War on Honesty. 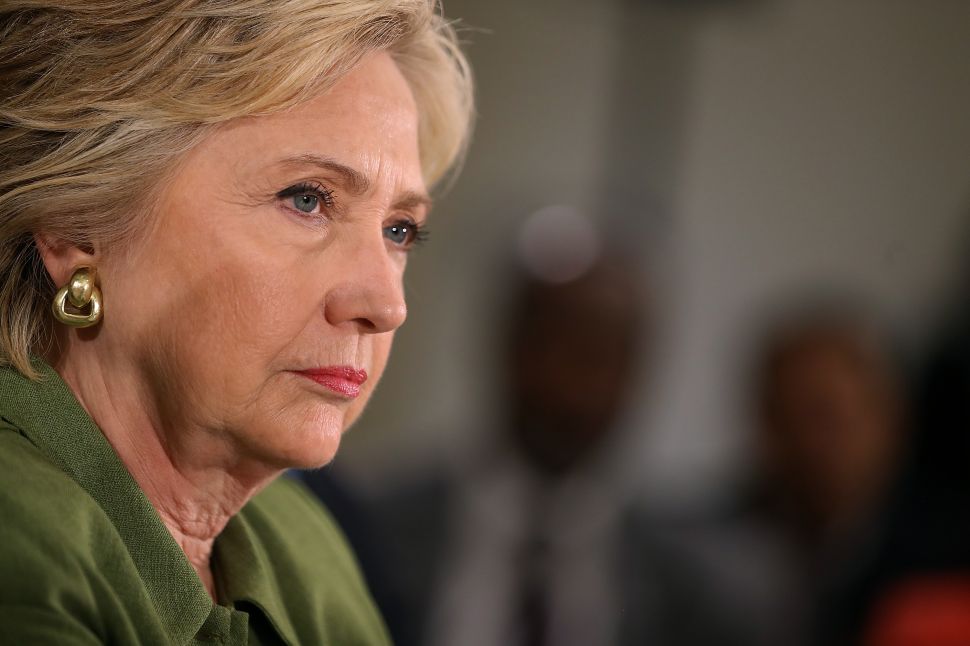