“Today, I endorsed Hillary Clinton to be our next president,” Bernie Sanders announced to supporters on July 12, shortly after formally endorsing Clinton at a campaign rally in New Hampshire. “I know that some of you will be disappointed with that decision. But I believe that, at this moment, our country, our values and our common vision for a transformed America are best served by the defeat of Donald Trump and the election of Hillary Clinton.”

This was, unfortunately, the best Sanders could do ahead of the Democratic National Convention to ensure Clinton and her superdelegates don’t vote down every progressive concession he squeezed into the Democratic platform. But fear mongering Donald Trump is not a valid or viable reason to vote for Clinton, and many of Sanders’ supporters won’t be following suit.

Over the past few weeks, Green Party presidential candidate Jill Stein’s social media presence has increased exponentially. Stein, whose platform shares more similarities to Sanders’ campaign than Clinton‘s, recently tweeted a Sanders quote from 1989. “I think we need to go in the direction of Canada, which has a third party, a democratic socialist party,” Sanders said. “We may not win right away. But our job is to bring together workers and poor people, minorities, environmentalists. Let’s come together, articulate the issues, and I think we’re gonna make some real progress.”

We need a new major party now more than ever. If not now, when? pic.twitter.com/gz6pxHug9C

The Democratic Establishment hasn’t progressed over the past several decades, and the recent Trans-Pacific Partnership Agreement (TPP) vote is a prime example of the Party’s inability to move forward. Progressives and Bernie Sanders alike have vehemently opposed TPP, with Sanders surrogates on the Democratic National Platform Committee voting against TPP in the party platform. But even though Clinton vocally opposed TPP, her surrogates and those appointed by DNC Chair Debbie Wasserman Schultz voted in favor of the agreement.

On July 10, former Secretary of Labor Robert Reich took to Facebook to reveal he was told—by an acquaintance currently advising Hillary Clinton—that Clinton and other Democratic Establishment leaders would never oppose TPP because Obama is in favor of it. As with most of Clinton’s stances, they favor political expediency rather than true principles.

Because of her propensity to flip-flop on important issues, Sanders supporters aren’t going to trust Hillary Clinton to push forward Sanders’ ideals. In contrast, Jill Stein has been an adamant opponent of TPP, calling to “Flush The TPP” more than six months before Clinton ever took a formal position on the matter.

When Bernie Sanders formally endorsed Hillary Clinton, several of his supporters walked out of the campaign rally—just as many more will walk out of the Democratic Party to support Jill Stein.

“I am currently trending on both Twitter and Facebook. Why? Because Americans want more than warmongers and fools,” Stein tweeted on July 12, shortly after Sanders’ endorsement.

Sanders’ supporters won’t fall victim to the emotional blackmail of propaganda like “Unite Blue,” “Vote Blue No Matter Who” and Clinton’s most recent “Stronger Together.” Instead of falling in line, blindly following Clinton just because she’s a Democrat, Sanders’ supporters will vote for values. Bernie Sanders sparked a political revolution that will continue strong with Jill Stein.

“Millions are realizing that if we want to fix the rigged economy, the rigged racial injustice system, the rigged health care system, toxic fossil fuel energy and all the other systems failing us, we must fix the rigged political system, and that will not happen through the rigged Democratic Party,” Stein said in a statement on Sanders’ endorsement. “Right now we have a real chance to change our rigged political system, and we must not squander this opportunity by pledging allegiance to a corrupt political insider who the majority of Americans do not like, trust or believe in.” 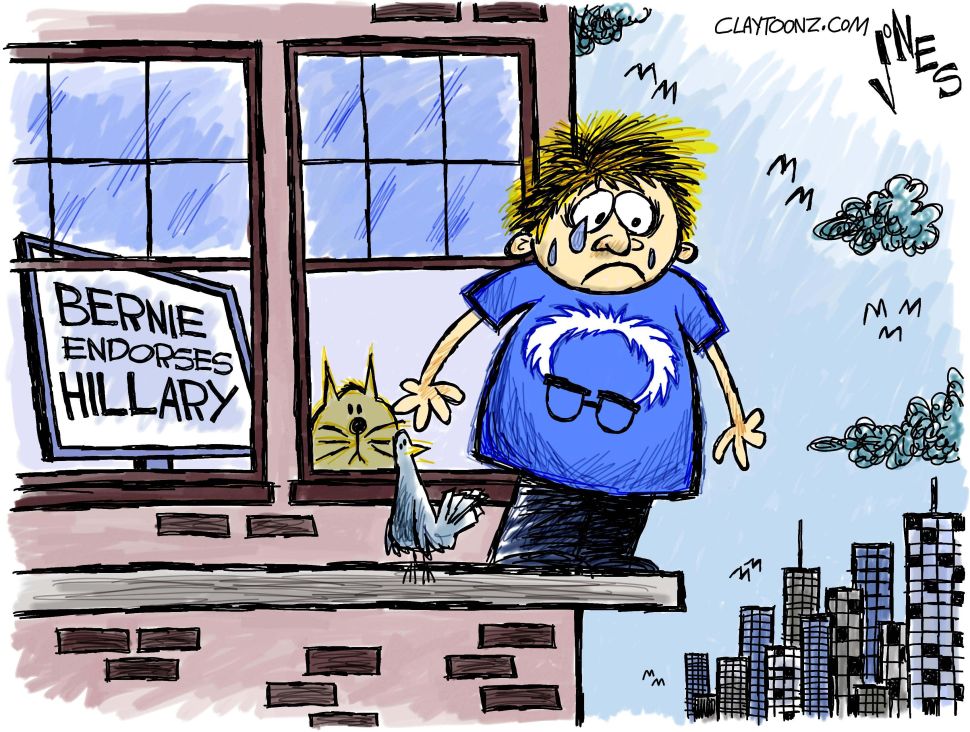