—off a Bridget Jones’s Baby trailer no less. What could Variety‘s newly-minted chief film critic have possible been thinking in his 1,500-word thumb-sucker? Call me sexist? Unlikely but justified.

Here’s a sample of the 57-year-old’s mansplaining:

“Watching the trailer, I didn’t stare at the actress and think: She doesn’t look like Renée Zellweger. I thought: She doesn’t look like Bridget Jones! Oddly, that made it matter more. Celebrities, like anyone else, have the right to look however they want, but the characters they play become part of us. I suddenly felt like something had been taken away.”

Didn’t his wife, a smart cookie, say, “C’mon, honey, you can’t really criticize Renee’s looks off a trailer and kvetch about the fact that her once-zaftig Bridget Jones no longer turns you on? Can you scramble those eggs a little harder?”

Wasn’t there a reasonable Variety editor to rein in the newly crowned critical chieftain, giving the piece a sensible nip/tuck? Perhaps red-penciling something like this: “when you wax nostalgic about ‘the slightly slovenly doughy-cuddly perfection of Renée Zellweger’s face’ and its possible loss through plastic surgery, it could be interpreted as ageist.” Or did the editrix just sigh, stet and enter the women’s bathroom to vent to her similarly cowed colleagues. It’s a paycheck.

Circling their wagons, these put-upon men in a shrinking field are aware that the critic’s role in these troubled times isn’t solely to review movies but to hook the clickbait of trailer responses.

Odds are, top critics in beards and glasses—the 73 percent—surrounded Owen, saying, “yeah, Owen, you’re right again, dude, the forty-something blonde in that trailer just isn’t the cuddly yummy bunny of yore.” Circling their wagons, these put-upon men in a shrinking field are aware that the critic’s role in these troubled times isn’t solely to review movies but to hook the clickbait of trailer responses, to dabble in the deep thought of the personal essay: what does Renee Zellweger’s face mean to me, Owen Gleiberman, father of two, husband and past partaker of exotic practices (he didn’t call his memoir Movie Freak for nothing)?

Look in the mirror, Owen. Have some empathy before body-shaming Zellweger, 47.

Still, let’s give Gleiberman credit for good intentions—let’s say he really isn’t a bad guy. (To quote Owen: “It may sound like I’m being patronizing.”) He’s kind to his children, generous to his friends and he’s championed some good movies. Yes, he’s a bit of a blowhard. He lacks that essential quality that makes a critic great beyond a love and understanding of film: deep personal insight and an awareness of the shoals of his own personal biases.

And, while Gleiberman may protest, these narcissistic tendencies are obvious to others, like Christina Applegate and Rose McGowan. On Twitter, the Charmed star took up the fight that continues to cost her jobs, naming names:

You are a fucking idiot, Owen Gleiberman. Good hire @variety https://t.co/JhM3C92x1x via @variety

And McGowan’s legion of fans, the #rosearmy, arose. Here’s one of my favorites:

@rosemcgowan @Variety me by the end of the article. If I use a gif w/ a different person is it still the way I felt? pic.twitter.com/LIRFR1AHqj

Susan Wloszczyna, film critic and contributor to rogerebert.com, asked the Observer, “I wonder what Owen makes of Michael Cimino’s face—did his plastic surgery make him a different director? What of Rourke and Stallone’s altered features? Stallone sure looked different in Creed than the Rocky I knew.”

Why not pick on Mickey Rourke’s recent Ashby trailer—remember when he was handsome in Diner? Yet, fright face and all, he still got nominated for an Oscar for The Wrestler. Why? Because, like Renee, he is a genuinely talented actor, not just a pretty face or figure.

“Owen is not stupid. He knew what he was doing,” wrote Wlosczcyna. In the current competitive climate, it’s understandable that EW‘s tossed critic has a new perch and wants to reclaim his mojo. Wlosczcyna continued: “Owen wants to make waves and beat his chest and say, hey, I will point out what everyone else is too afraid to say. The trouble is he is saying something that no one seems to be all that concerned about.”

Such ridiculous pronouncements propped on a respected industry platform like Variety are further evidence of banal, persistent media bias against women both on-screen and behind the camera.

Except that such ridiculous pronouncements propped on a respected industry platform like Variety are further evidence of banal, persistent media bias against women both on-screen and behind the camera.

According to Owen: “The syndrome we’re talking about is far more insidious, because when you see someone who no longer looks like who they are, it’s not necessarily the result of bad cosmetic surgery. It’s the result of a decision, an ideology, a rejection of the self.”

Let me womansplain: These are not individual women acting alone. This is not existential angst but systemic bias. They are professional actresses, in some cases making millions. Like Zellweger, they are trying desperately to hold on to their careers as leading ladies carrying the narrative arc in an industry where male stars date younger and younger on screen while these beauties begin to play mothers of men only a few years younger than they are.

Acting is a craft—and the best improve with age. Consider the attractive visage of Peaky Blinders’ matriarch Aunt Polly (played by Helen McCrory, 47, Zellweger’s contemporary). The camera loves the British actress’ face, its expressiveness when she is thinking one thing but saying another, the hauteur that masks fear, the lingerie-clad sex scene in which she brings her full character to bed, flinching at a memory of rape and all.

Gaze at 77-year-old Diana Rigg, the incomparable Emma Peel of The Avengers, in Game of Thrones. As she steals every scene she’s in wearing her frumpy wimple, Rigg demonstrates the power of her acting not the count of her crow’s feet. Strong woman are sexy, wrinkles be damned—and they are also threatening to a certain kind of male.

That’s the “insidious syndrome” that Gleiberman raises but misdiagnoses in Zellweger’s looks. It’s not a rejection of self on her part, Owen, but Hollywood’s rejection of women as seen through the biased male gaze reflected in your opinion piece.

Perhaps for Variety‘s chief film critic, not that he would own up to it, Zellweger is no longer desirable. But he never had a chance except in a dark movie theater. And, for me, I never cared about Zellweger’s sex appeal—now Viggo on the other hand…I’m biased that way. 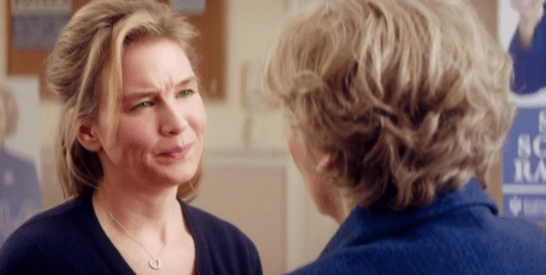