Mayor Bill de Blasio vowed a strong NYPD presence at any protests in the city today after 11 police officers were shot, five of them fatally, during a demonstration against police shootings of black men in Dallas last night.

“An attack on our police is an attack on all of us,” de Blasio said this morning on WNYC’s Brian Lehrer Show.

The mayor said there had been no threats against police officers in New York City, but that they would nonetheless work in two-officer patrols to avoid any officers from being on their own—and he urged people who might be continuing protests that began in the city yesterday to “recognize that our police officers are hurting.”

“We will have a very large presence at any protests that are planned to make sure that things are very well-controlled,” de Blasio said.

Dallas Police said today that their suspect in the sniper shootings, who is now dead, told officers he was angry about police killing black men and wanted to kill white people and white officers. The police were guarding a protest in downtown Dallas in response to two recent deaths of black men at the hands of police: Alton Sterling in Baton Rouge, La., and Philandro Castile in St. Paul, Minn.

Yesterday, de Blasio spoke emotionally about both of those deaths—saying no parent of a child of color could watch the videos of those shootings or their aftermaths without being afraid. De Blasio’s children, Dante and Chiara, are biracial. One police union leader was critical of de Blasio for making those remarks yesterday, even before today’s news out of Dallas. But the mayor said it was appropriate to mourn people killed by police as well as the police officers who had been killed.

“We absolutely have to be able to do both, to show that we can end the violence in all its forms,” de Blasio said. “We have to restore a new relationship and a positive relationships between police and community.”

The issue of protests against police has been a politically tricky one for the mayor, a man who was known for getting himself arrested at protests against firehouse or hospital closures and ran for office as an ardent supporter of police reform. At the close of his first year in office, the city was gripped by ongoing protests over the decision not to indict a police officer in the killing of Staten Island man Eric Garner. In late December, a gunman who said he was seeking vengeance for black men killed police—Garner—assassinated two police officers in Brooklyn, an action Police Commissioner Bill Bratton tied to the rhetoric of protesters. De Blasio fruitlessly called for a moratorium on protests against police until after the officers funerals. At the funerals, thousands of cops turned their back to the mayor; on the other end of the spectrum, police reform activists were disheartened when the mayor took a harder line against protesters after previously defending them.

Today, de Blasio against strove to walk a fine line. He credited officers for their “restraint” in dealing with protests in the city, and urged community members to work with them. He also praised peaceful protesters—but said a few bad apples show up to shout “vile” things at police in hopes of heightening tensions.

“There’s a small number of people who want to poison the well, and in fact want to disrupt progress in the relationship between the police and community,” de Blasio said. “Ten or 20 who say vile or horrible things and then hope that their negative comments will be portrayed as the majority.”

One caller to the radio show this morning was disappointed the mayor had not taken a stronger line against police shootings—saying it seemed the mayor backed down in the face of police union criticism and questioning who really ran the police department.

“The people run the government,” de Blasio responded. “The police department’s policies are determined by civilians elected by the people, and it’s as simple as that.” 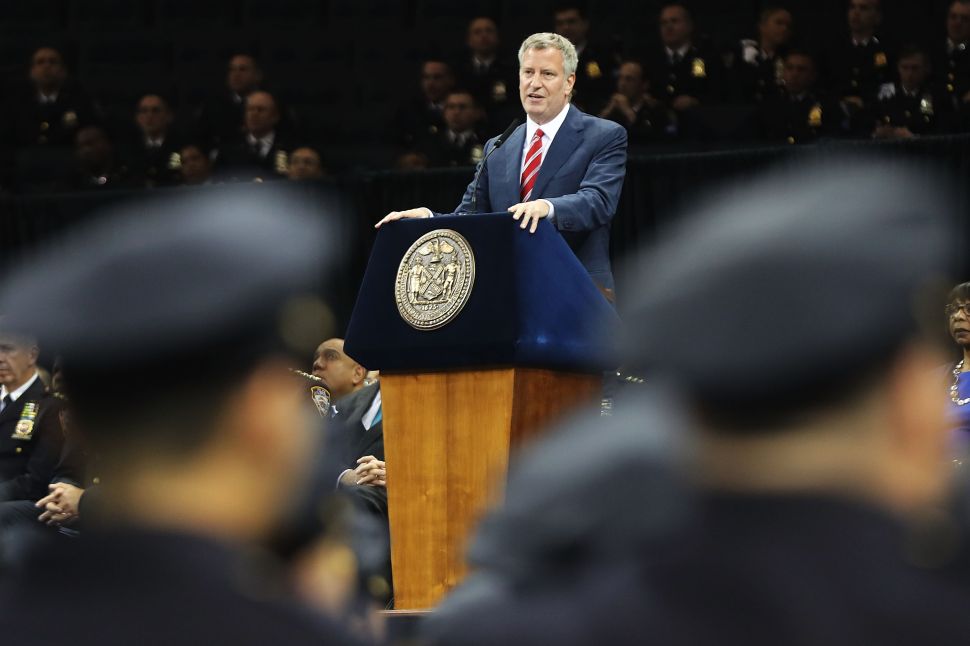