What’s to blame for the city’s current troubles?

Governor Andrew Cuomo and the Republican-led State Senate ignoring the interests of the city, according to Mayor Bill de Blasio.

At an unrelated press conference where the mayor and NYPD Commissioner Bill Bratton announced an investment of $7.5 million for 6,000 ballistic vests and 20,000 helmets for police officers in Brooklyn this morning, the mayor said the State Senate is “not sympathetic to the city.”

The mayor and the governor have duked it out on a variety of issues, including homelessness, Medicaid and affordable housing, though the mayor maintains that they speak regularly even if they do not always agree on everything.

But he did blame the status quo on lack of cooperation from the governor and the State Senate.

“Unfortunately to me the way things are right now are because of the positions of the governor, because of the Republican State Senate,” he added. “And my job is to fight issue by issue and do the best I can for New York City.”

The governor’s office hit back, hard.

Ironically, the mayor called for party unity on the national scale at the same event today—praising the  resignation of Florida Congresswoman Debbie Wasserman Schultz as chairwoman of the Democratic National Committee. The polarizing Wasserman Schultz, stepped down from the party post in the wake of Wikileaks’ release of internal DNC emails that seemed to confirm claims by Vermont Sen. Bernie Sanders’ supporters that the DNC was working on behalf of Clinton in the Democratic primary.

“It was time for her to go,” he said. “Obviously, there were a number of revelations that were very troubling and I think it was important for her to move on so that we can focus on Hillary Clinton, electing Hillary Clinton, focus on the unity of the Democratic Party.”

He added that he sympathized with the concerns Sanders and his voters.

“I certainly understand the frustrations that a lot of Bernie Sanders supporters felt about them. And if we’re going to have a unified party, that takes some of the work and frankly Debbie is someone who unfortunately is seen as compromised,” he continued.

And while the mayor wasn’t ready to make peace with Cuomo, he did laud another former rival: ex-Mayor Michael Bloomberg, who decided to endorse Hillary Clinton with a prime-time address at the convention on Wednesday. As Public Advocate, de Blasio constantly bombarded Bloomberg with criticism, and many of the ex-mayor’s former staffers—Elon Musk and Stu Loeser among them—have actively combated the current mayor.

“He’s honestly a very important voice in this country because he is an independent and it’s good for him to speak to his fellow independents and say, ‘It is a very stark choice,’” he said. “And I think it’ll be very helpful, so I’m very happy he’s doing that.”

Bloomberg, a Democrat-turned-Republican-turned-independent, ruled out his own for the presidency earlier this year, and attacked GOP nominee Donald Trump as “demagogic.”

“I think the notion that Donald Trump has put forward that New York State is competitive is preposterous,” he said. “This is a Democratic state, this is a state that has tremendous respect for Hillary Clinton.” 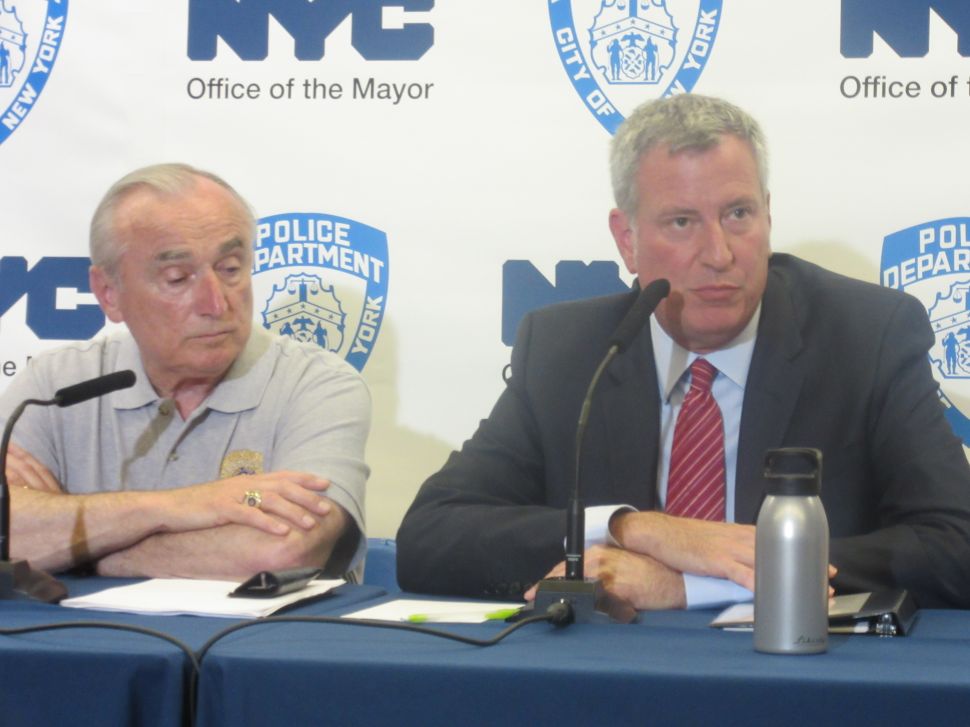