[youtube https://www.youtube.com/watch?v=wBZtM8q2Z1g]
Netflix rode the teaser train to San Diego Comic-Con this year, drumming up buzz in just the first day by dropping first looks at both Luke Cage and Iron Fist, confirming a third season of Daredevil and, finally, debuting a short trailer for The Defenders.

Of course, the latter managed, as all great comic books eventually do, to stir up an immeasurable amounts of hype while actually explaining nothing. So, you still have questions about Marvel’s The Defenders? We got answers.

Oh yeah, it is, which actually makes sense! If Marvel’s massively successful cinematic universe is the coolest kid in high school–bumping, like, a mix of Taylor Swift and radio-friendly EDM–Netflix’s dark, grounded Marvel slate is the MCU’s weird, distant cousin that it pretends it’s not even related to. The Defenders would be so into grunge.

What exactly IS the Defenders?

The Defenders are like The Avengers–you do know the Avengers, correct?–except with an active sex life, a penchant for real-world violence, and no Tony Stark footing the bill for their shitty third-floor walkups in Hell’s Kitchen. Instead of threats against the universe and mankind as we know it, The Defenders are semi-misfits who deal with threats to, say, 56th Street between 8th and 9th.

And WHO are the Defenders?

Although, in the long history of the Defenders in the comic books, the team has been a revolving door including but not limited to The Hulk, Doctor Strange, Silver Surfer and Son of Satan.

Did you say Son of Satan?

Ah, that was just his superhero name. Oh wait, yeah, no, he was also the literal child of the actual Devil.

…okay, so who are Daredevil, Jessica Jones, Luke Cage and Iron Fist?

I highly, HIGHLY recommend the Marvel Netflix series which have already debuted–two for Daredevil, one for Jessica Jones, with Luke Cage coming September 30. Go ahead, I’ll wait. Well, no, that’s like 40 hours of television, but you can catch up with me when you’re done.

Daredevil: Despite being blinded with chemicals as a child Matt Murdock gained heightened control of his other four senses, which he puts to good use by backflip-kicking muggers, rapists and the occasional ninja assassin in the face. By day, he’s a lawyer. To date he’s put the Kingpin of Crime, Wilson Fisk, behind bars,  staved off an invasion of NYC by the mysterious Hand, and forged a weird, awkward friendship with the shotgun-loving vigilante Frank Castle, better known as the Punisher.

Jessica Jones: Runs Alias Private Investigations, where she spends some time tracking down info for clients and a lot of time getting drunk. Also, she has super strength and can kind of fly, but she keeps that on lock. Jessica had a long, complicated relationship with Kilgrave–complicated because he was mind-controlling her into it–which ended abruptly when Jessica broke his neck and killed him.

Luke Cage: While spending time in jail for a crime he didn’t commit, former-gang member Luke Cage’s life changed mentally (decided to turn his life around, become a better man, etc) and physically (a failed experiment gave him unbreakable skin, super strength, etc). Luke and Jessica Jones have a complex past, in that at one point they were super-powered friends with benefits until, woops, Luke discovered Jessica murdered his wife. It was mind-control though, so, there’s hope.

Iron Fist: Danny Rand was a simple, blonde little boy until a trip to the mystical city of K’un-Lun leaves his parents dead and him stranded. Luckily, the residents of K’un-Lun are willing to raise Danny, which in addition to food and shelter includes lessons in the mystical martial arts of the Iron Fist.

Wow, and what brings these people together?

Tough to say. To date, Luke Cage is not exactly fond of Jessica Jones, Matt Murdock hasn’t met either of them but his partner, Foggy Nelson, just took a job at Hogarth, Chao and Benowitz, a law firm heavily included in Jessica Jones. Plus, we haven’t even MET Finn Jones’ Iron Fist on-screen yet, which means he’s probably still in K’un Lun killing a dragon. Oh, also, yeah, at one point in Iron Fist’s origin story he kills a dragon.

Right! Right, yeah, all we have for the main villain of The Defenders is rumors and theories. We can confirm that Matt Murdock’s mentor Stick, played by Scott Glenn, will return. That’s him you hear in the teaser: “You think the four of you can save New York? You can’t even save yourselves.”

However, where there is Stick there is usually The Hand, which is the ancient order of assassins we last saw in Daredevil season two. The Hand is obsessed with something called “The Black Sky”, which is something no one has yet to officially define but is essentially something unpleasant that will seriously mess the world’s day up. Big stuff. Super-hero team-up stuff. And as you may remember, spoilers spoilers spoilers Daredevil’s second season ended with The Hand in possession of Matt Murdock’s former lover/current dead assassin Elektra Natchios, who they claim IS The Black Sky. Proving, once and for all, superhero or not the greatest threat in your life will always be someone you used to date.

And why can’t, like, The Avengers just come in and deal with this?

Because most of them are too busy fighting each other like school-children. I mean, Spider-Man is like a 40 minute ride on the E train away from Hell’s Kitchen, but he’s too busy dealing with Iron Man’s bullshit. Plus, Thor’s off saving his brother from Taylor Swift or whatever, and The Hulk is, presumably, in outer space.

Sweet, so whose running this thing?

Douglas Petrie and Marco Ramirez are set to serve as showrunners, just as they did for Daredevil season two. Plus, Daredevil‘s original showrunner, Drew Goddard, is signed as executive-producer. So, basically, if you liked any part of Daredevil you’re going to love The Defenders.

And when does The Defenders debut?

The teaser says, cryptically, “2017.” So…2017. Until then, we have Luke Cage’s solo series premiering September 30, Iron Fist ALSO sometime in 2017 and, without even looking it up, roughly 65 Marvel movies to tide us over. 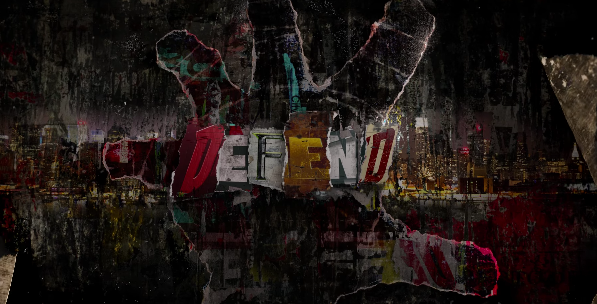