Since Donald Trump clinched the Republican nomination a few months ago, there has been a great deal of attention paid to which Republican leaders would support the nominee and which would not due to concerns about their candidate’s racism, lack of qualifications, tenuous understanding of democracy and other issues. This is a critical decision for many Republican leaders whose decision at this moment in politics could be held up to scrutiny for campaigns to come. However, by focusing such attention on Republican elites including current and former holders of high elective office, it is easy to overlook the reality that millions of Americans, not all of whom are Republicans intend to vote for Trump in November. Several million, of course, have already cast a vote for him during the primary season.

Even more than in previous elections, these voters fit a clear, if broad, demographic profile. According to almost all public opinion research, they are overwhelmingly white, Christian and straight. This is to be expected given that the Republican Party has won big majorities of voters who fit those three categories, regardless of gender, for decades. This year, the demographic homogeneity of the GOP base is even more clear as Trump has proven, even by contemporary Republican standards, unpalatable to African Americans and Latinos. An additional demographic wrinkle in 2016 is that support for the Republican candidate is considerably stronger among those white straight Christian voters who are on the lower end of the income and education spectrum. Recent polls, for example, indicate that Hillary Clinton could become the first Democratic candidate for President to win the white college educated vote in at least a generation.

It is significant that as our country continues on its irreversible course to becoming more racially and ethnically diverse than ever before, a significant block of the electorate has rallied around a candidate who is the most explicitly bigoted candidate to win a major party’s nomination in modern history, and even to compete for a major party nomination since George Wallace’s campaign for the 1972 Democratic nomination was cut short by the bullet of a would be assassin. It is equally significant that those voters are being described in the media—almost across the political spectrum—not as supporters of a campaign that is built around intolerance, but as people responding with anger to rough economic times.

Thus, a political party and conservative political movement that has, often disingenuously, sought to make personal responsibility a mantra for decades, has not held their voters responsible for being taken in by what 2012’s GOP nominee Mitt Romney called a con man. Few conservatives this year have called on their base voters to act responsibly, instead we have been treated to months of reporting and analysis focusing on the dysfunction and problems facing lower income white people and communities across America.

The irony here is hard to miss, and evidence of just how deeply institutional racism frames so much of how white Americans understand our country. It is beyond apparent that if African Americans, a community who collectively has faced far more troubles and economic challenges than even lower income white America, responded by supporting a self-absorbed, wildly intolerant demagogue with an appalling lack of understand of almost every major policy issue, the same pundits, particularly on the right who are earnestly trying to explain, and implicitly excuse away, the support Trump enjoys among lower income whites, would seek to destroy that candidate and dismiss any rationalization offered by African Americans for their support of that candidate.

An analogy would be if the Democratic Party had a difficult primary and nominated somebody who had enjoyed huge support from African Americans while frightening and angering the rest of the party. Imagine if, for example, African American Democrats closed ranks around somebody like Louis Farrakhan and because other Democrats divided their votes among a dozen or so other candidates, Farrakhan were nominated. That is not far from what has happened to the Republicans who have nominated a megalomaniacal candidate with political ideas bordering on the fantastical.

It is unfair, but only a little to compare Trump and Farrakhan. Farrakhan has spent a lifetime as a divisive race-baiter, while Trump has only come to that recently. Farrakhan is probably the most vicious anti-Semite in American public life, while Trump enjoys the support of some nasty anti-Semite’s and a demonstrated a lack of concern about anti-Semitism in his own campaign, but cannot be compared to Farrakhan in this regard.

The problem the GOP and the conservative movement generally has created for themselves, not just by indulging Mr. Trump’s candidacy, but by excusing away the extraordinarily poor judgment of their party’s base, is that their pious words on any number of issues around tolerance can no longer be given any credence. How can anybody who has excused away Mr. Trump’s anti-Semitic Tweet about Jewish money ever criticize an African American politician who is too close to some known anti-Semite, or speak out against anti-Semitism on college campuses?

How can anybody who has allowed Trump’s supporters to make violent threats or call for widespread discrimination against Muslims ever be taken seriously as a proponent of religious freedoms in general. More generally, how can any conservative who has not challenged the support of their base for a racist campaign ever again say that conservatives are not racist. These are important questions with significant political and even moral implications for the right; and this is a problem the right has created for itself by not standing up to the most extreme, intolerant and irresponsible voters in their party; and it didn’t start in 2016 or with Donald Trump. 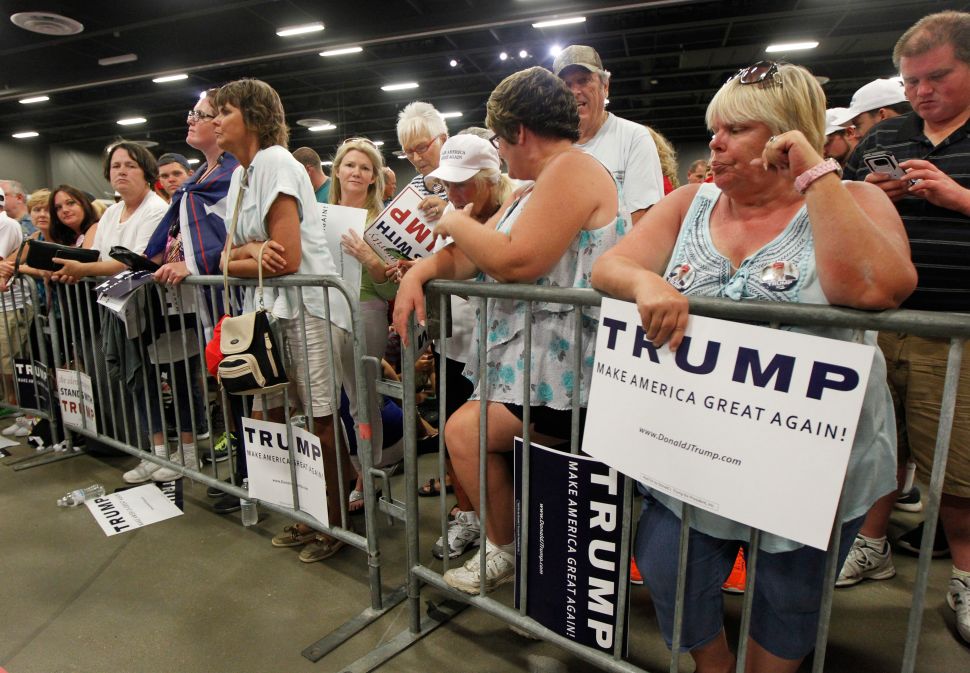