CLEVELAND—Donald Trump’s convention continued to be, well, unconventional as the candidate made his second arrival in Ohio in a week.

Trump broke with political norms by taking the stage on the first night of the convention to introduce his wife, Melania (who broke with norms by apparently plagiarizing a large chunk of her speech from First Lady Michelle Obama’s address to the 2008 Democratic conclave). The would-be president further broke with precedent by flying back to New York that night in order to address the crowd on Tuesday remotely from his eponymous tower. He then jetted back to Ohio for today’s unusual event.

Trump’s children and running mate Gov. Mike Pence of Indiana watched and waited in the scalding afternoon sun on a grassy lot outside the Great Lakes Science Center, as the mogul’s private plane sailed down over Lake Erie to park at a nearby airfield. He then boarded his personal helicopter, circled the science center and neighboring FirstEnergy several times as the theme from the film Air Force One blasted on the ground.

After greeting and conferring with his family and prospective vice president, Trump approached the mass of reporters waiting behind barricades and spoke over a microphone.

“We’re going to win Ohio, we’re going to win it all,” he said after some perfunctory thanks to the city he apparently did not want to spend more than one night in. “I just want to introduce a man who’s become a friend of mine, somebody who’s going to make an unbelievable vice president of the United States.”

He then passed the mic to Pence, his new hype man.

“Let’s hear it for the next president of the United States, Donald Trump,” Pence declared, a small group of supporters nearby applauding. “It is such an honor to join your family to welcome you to Cleveland.”

“I’m convinced what begins in Cleveland will end in the White House. Thank you, god bless you, and welcome to Cleveland,” the governor continued, as though Trump had not been in Cleveland some 48 hours before.

An hour and a half before the touchdown, the campaign released the latest in a litany of statements on Melania Trump’s borrowed oratory two nights before. This one did not differ considerably in its substance from the first one—but it seemed to diverge from subsequent claims campaign staffers made in the press that any resemblances between the current First Lady’s speech and the remarks of  her would-be successor were purely coincidental.

This one also came from Meredith McIver, a longtime Trump ghostwriter.

“In working with Melania Trump on her recent First Lady speech, we discussed many people who inspired her,” McIver said. “A person she has always liked is Michelle Obama. Over the phone, she read me some passages from Mrs. Obama’s speech as examples. I wrote them down and later included some of the phrasing in the draft that ultimately became the final speech. I did not check Mrs. Obama’s speeches. This was my mistake.”

Trump’s wife was notably absent from the makeshift airfield today. It is unclear whether the new statement or the chopper photo-op will dominate the news cycle going into the convention ceremonies this evening.

Oddly, the Great Lakes Science Center hosted an event for Sen. Rob Portman shortly after the crowd dispersed. Portman, facing a tough challenge from former Ohio Gov. Ted Strickland, spoke at the convention last night but took no part in the event with Trump and Pence this afternoon. 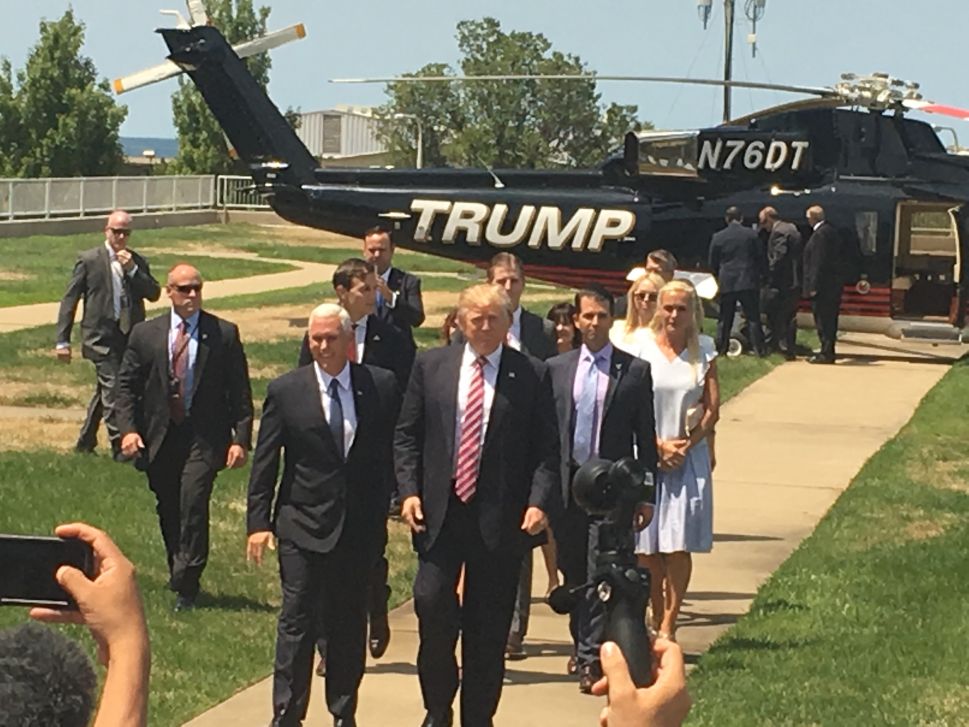