Big news Moz fans! Mexrrissey is here to stay. The Mexican tribute band comprised of a who’s who of the country’s leading musicians—Camilo Lara, Sergio Mendoza, Ceci Bastida and Jay de la Cueva, among others—has become an international phenomenon over the past two years for translating and rearranging the melancholy tunes of English-born crooner and Smiths front man Morrissey to traditional Latin rhythms.

Now, after touring the globe with a handful of tracks rooted in solo Moz and early Smiths songs, the group has cut an album titled No Manchester, featuring seven studio-recorded songs and five recordings from their live show at last year’s RadioLoveFest WYNC, which I had the fortune of attending. When the group played their set at the Brooklyn Academy of Music they were strictly a road act; part of their appeal was the ephemeral nature of their inventive remixes, and trying to catch them when they circled through town.

“It’s been pretty crazy years,” Lara tells me backstage after this week’s show at Rough Trade. “But now we’re playing a lot. It was supposed to be only two or three shows and now…” (Let’s just say there are few places where Mexrrissey hasn’t performed.)

Lara spearheaded Mexrrissey two years ago, and is responsible for arranging and producing the album alongside Mendoza. For die-hard fans, a large swath of whom happens to be Mexican and Mexican-American, the group’s fusion of cumbia, mambo and cha cha cha styles with a colloquial interpretation of Moz’s original lyrics has been a hit.

“Everywhere the reaction is very euphoric,” Lara says. “Because you connect with the lyrics, which are beautiful, and you don’t necessarily need to speak Spanish. It’s a fun experience, and it’s a very danceable show—it’s very energetic.”

Now, with permissions finally secured from Morrissey himself, and their album pressed to vinyl, the group is back on the road. This week, Mexrrissey played two free shows in New York, the first in Williamsburg before headlining the Central Park Summer Stage on Wednesday night. Next up: Chicago, Los Angeles and San Francisco. During our chat after the group’s electric set, Lara told me about the difficulty of getting permission to record and what Moz thinks of Mexrrissey.

Mexrrissey has been playing shows nonstop since I saw you last year.
We did a bunch of cities than I never expected to go to with my own projects. It’s very interesting, it’s fun how some projects just connect with people.

Where haven’t you played?
Funny enough, we haven’t played in Mexico. We have only done one tiny show. So I’m very curious for that. It’s been half and half. Half of people really got offended because we mess with Mexicanity and we mess with Morrissey.

People have really been offended by the project?
Yeah, very offended.

Other musicians or fans?
A nice combo. That’s the beauty of it, when you mess with something it can go either way. You can either hate it, and make it a horrible experience, or make it fun. That’s pop music, that’s what it’s about: reimagining songs that are part of the collective, for everyone.

How complicated were the permissions for doing the actual album?
Super, super complicated. We got the O.K.s from Morrissey, and from all the writers who write with Morrissey. And we didn’t get the rights to record Johnny Marr songs. That’s the Smiths, but we play the songs and it’s fun.

How much contact have you had with Morrissey during this project?
He approved the translation, which is not an exact translation—it’s a reinvention of each lyric. It has more slang in Mexican Spanish, so he was very kind to let us mess around with the songs, and he has posted them on his True to You website all the time. He’s been super supportive in his own way.

Is there any possibility you might do a collaboration with Morrissey?
I did a remix for him about five or six years ago…of a song called “Someone is Squeezing My Skull” and he listened to it and through his manager told me, “Oh, I hate your remix.” I was like, “Well, sorry about that.” And then four months later the manager called me back and told me, “He completely got confused, he loved your remix.” It was like a roller coaster.

Is there a song that holds personal significance for you?
“The More You Ignore Me the Closer I Get.” We mashed it up with Juan Gabriel’s “Querida,” which is a beautiful anthem, so it’s very emotional. It makes a perfect point of what we’re trying to do: to prove a point that Morrissey’s our Juan Gabriel in English. That’s the bottom line of the whole project; it has the DNA of Mexico.

What is the significance of the album’s title?
No Manchester: it means, in Mexico, “Are you kidding me? No fucking way.” That’s exactly the translation. In Mexico, you’d say “No mames” or “don’t fucking kid me.” But this is like saying “shoot” instead of “shit.” And No Manchester is also because we are not from Manchester. So it has this beautiful double meaning.

What’s next for the group?
We’re going to do a bunch of shows from here to December, touring in Europe, Finland and the U.K., and hopefully Mexico. 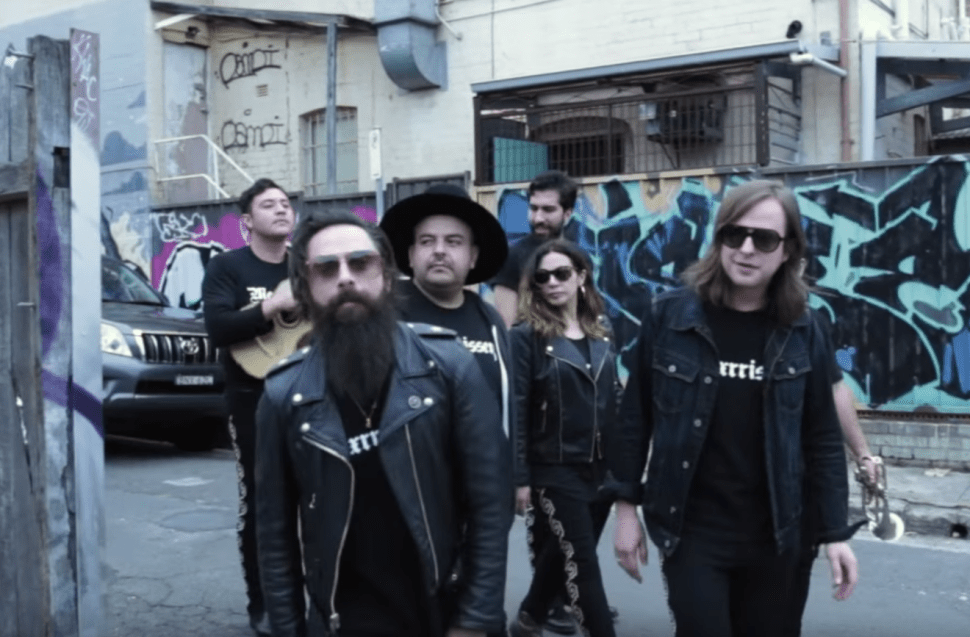