Simon Says is a dull curiosity about the world of the paranormal phenomena, written by a Boston food critic, of all things, named Mat Schaffer. In addition, he has a degree in “interdisciplinary studies in mysticism.” All of which makes him an interesting person with many irons in the proverbial fire. A playwright he is not.

Simon Says, making a brief visit to Off Broadway’s Lynn Redgrave Theater, stars the formidable and accomplished actor Brian Murray as an elderly academic who shares his book-strewn flat with a burly young man named James (Anthony J. Goes). Murray, gnarled and shaky, makes you worry about his well-being, but whatever ails him in his dotage seems to fit in with the old professor he’s playing, who is recovering from an undisclosed illness. Although James takes care of his medications, the old man doesn’t take very good care of James, who has been his ward since a famous childhood concussion revealed him to be a celebrity with psychic powers who made tabloid headlines when his mother deserted him in a Las Vegas motel to be rescued by the professor and raised as a science experiment. James hates his reputation as a “channeler” through whom a troubled world gets advice from an inner force called Simon. The professor is using him to research his new book, which he thinks will win him a respected place in the field of science. All James wants to do is escape his psychic prison and lead a normal life, but when the play opens he learns the professor has stopped payment on his tuition check for his first semester in college—which he considers a coveted step in the direction of a new life of self-esteem and independence. James packs his duffel bag and heads for the door, but his angry departure is delayed by the arrival of a new client, a pretty high school teacher named Annie (Vanessa Britting), who asks James to contact her dead husband. James reluctantly agrees to a “session” explaining he is not a magician. The voice of Simon appears in many guises—everything from farmers and soldiers, to a priest at Luxor and a concubine in the Han dynasty. This palaver takes up half of a 90-minute play that seems like three days of hard labor.

The rest of Simon Says plunges the viewer into the traumatic ritual James goes through to channel his voices. There’s a great heap of babbling polemic about holistic healing, metaphysical phenomena, the energy of the soul, paraphysical aptitude, and the concept of luck vs. fate, gravity vs. synchronicity, and life vs. illusion. Everything except the information needed to make sense of what is going on. As the professor, Murray has nothing to do except furrow his brow and make grouchy noises that sound like “Harrumph.” Goes is a burly man who goes into a trance, falls to the floor in a fit of tremors and uncovers the secret of a death centuries ago that makes less sense than everything that precedes it. The play appears to be a heady physical workout for his range and ability. For the audience, it’s just an unwelcome workout. By the time James and Annie turn out to have known each other two centuries earlier, I had surrendered to the arms of Morpheus. Where on earth do they find these plays, and the people who produce them?

Bring back Mandrake the Magician. 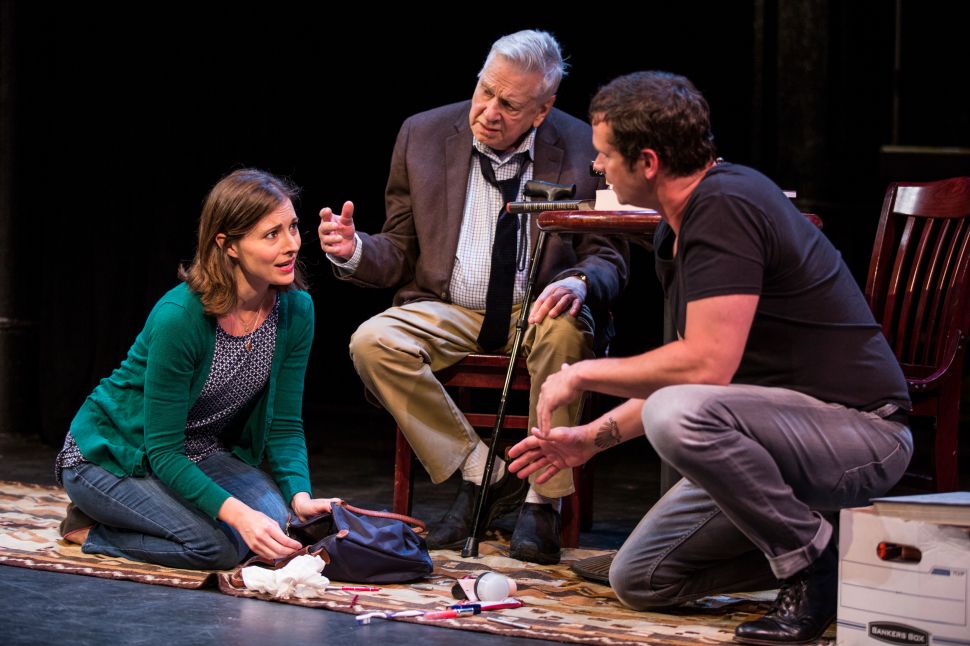