Sensitive, caring people agree: We’re living in a terrible time. But according to the creators of sci-fi movies and books, the future looks worse. Drake Doremus’ new film Equals is a futuristic Romeo and Juliet knockoff set in a cold, dystopian society called The Collective, where human emotions are forbidden and people are reduced to the status of robots. There is no war, greed, crime, hate, violence or—god forbid—love, because in a utopian society feelings have been eradicated and what’s left of the human race is calm, controlled and peacefully coexistent. Naturally, the natural order is about to be tested with tragic results.

After a full-scale atomic war has wiped out most of the world as we know it, Silas (Nicholas Hoult, the wide-eyed British actor from Mad Max: Fury Road and assorted X-Men installments) and Nia (Kristen Stewart, who also stars this week in the new Woody Allen film Café Society) are two blank-faced drones in white smocks who work for a company called Atmos. They occasionally exchange greetings but strive to be like everyone else—asexual, detached, unnoticed. Despite the propaganda they illustrate and publish at Atmos extolling perfection, they both sense they have become afflicted by a dreaded disease called SOS (Switched-On Syndrome) that causes people to manifest lost emotions. If they shed a tear, dream, crave affection or form social bonds to relieve depression, loneliness or anxiety, inhibitors are prescribed, but if that doesn’t work, they are ostracized, isolated and sent to the D.E.N. (Defective Emotional Neuropathy), never to be seen again. It’s a universal ritual uninterrupted except for an occasional suicide, but when Silas and Nia break all the rules and fall in love, the walls of their pristine prison fall apart. They try to hide their symptoms of SOS, but lust and love awaken and overwhelm their senses. With the help of a sympathetic underground SOS support group headed by Guy Pearce and Jacki Weaver, the lovers make plans to escape to the last patch of green called The Peninsula in a race against time to avoid elimination. Scientists have cured cancer and the common cold, but there’s no cure for SOS. Will The Collective destroy them and preserve order? Or is love so strong that it can truly conquer all?

These questions are nothing new in the science-fiction genre, and Equals has a script by Nathan Parker that is sparse on details about how The Collective evolved and why the people elect to live this way without question. In this ghastly world everything is digital, so nobody reads books, sex is against the law, people live in claustrophobic cells in large tower blocks, and nutritious food arrives with the touch of a button and looks like the processed muck astronauts eat on space ships. There’s not much backstory, but the production design is a work of art, so there’s plenty to look at in the absence of narrative exposition. Think Alphaville and Gattaca. I was fascinated by the way the film changes palettes, from blue to red, with occasional flashes of orange for warmth, depending on the mood shifts of the characters. The doe-eyed Hoult and the always edgy Stewart contribute heavily to the inherent style and suspense of a Shakespearean theme about lovers against the odds, and the location shooting, in the already futuristic architecture of Japan’s Awaji Island, is as arresting as it is exotic. All told, Equals is a feast for the eye that leaves you with a troubling contemplation of the future. 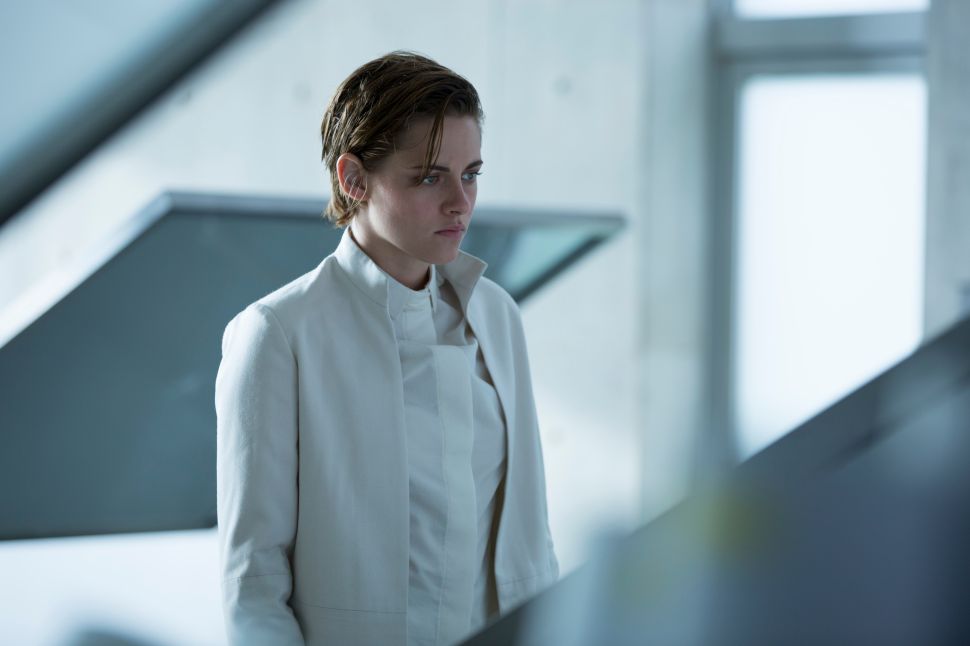