The Republican Party, known for its staid conservatism, self-described “Grand Old Party”—in the manner of a durable and well-constructed hymn—will nominate a boldly coiffed casino owner and reality TV show host to be president of the United States.

How and why did this happen?

The how part is mathematical. Donald Trump won a majority of delegates in the primary process. The phrase “primary process” is a quaint anachronism meant to describe a series of statewide elections where party insiders provide political access to local wannabe insiders for political support.

Following the principles of inertia, sixteen other candidates lost while Trump took the nomination without once choking down cold eggs at an Iowa diner after pausing mid-meal to kiss a baby.

Instead, he spent his time on the campaign trail saying and doing provocative things and then pausing to watch the media erupt at his every gesture. Trump became, in the idiom of our era, click bait. He drew to himself something rare in this age of fleeting images: enduring attention.

In hindsight, he was perhaps the perfect candidate for the times. Long before Facebook or Instagram, Trump projected selfies onto American Life. For the quarter century that preceded social media, Donald Trump magically appeared in our news feed, signing Doug Flutie and Herschel Walker, resurrecting Atlantic City, beating up Vince McMahon at WrestleMania 23—to be liked or shared or disregarded. But always noticed.

In the “primary process,” as reconstituted by the need to maximize hits and shares, his competitors looked small against his brazen personality. While Miley Cyrus or Lady Gaga might have stood a chance debating ISIS with Trump, Bobby Jindal did not. Chris Christie, an amateur attention grabber himself who dabbles in the practice from a relatively obscure governorship, openly marveled in the presence of a pro.

Standing out doesn’t fully explain Trump’s victory, though. This brings us to the “why” part of how he got the Republican nomination.

In the eight years of Barack Obama’s presidency, the Republican electorate has sent several revolutions to Washington, in hopes of mounting a loyal opposition. The Tea Party, sweeping victories in off year elections, failed against the political skill of Obama. But they also failed, by the reckoning of rank-and-file republicans, because media and culture feverishly supported the president.

There was a stopgap in place to avoid such a complete route and running up the score. Congressmen, Senators, think tanks and pundits were to provide a check and a balance to such overwhelming political dominance. That did not happen.

The perception is that many doing the bidding of republicans in Washington are very good at generating political outrage—but only for the purpose of gaining stature among the angry. In other words, they raise funds from sky-is-falling claims, but never really fix the problem. What they want is to lead the opposition, to be invited onto television, to sell their blog, and to orbit in close contact with the next republican president.

They have been called, over the course of the Trump revolution, the Establishment.

Donald Trump’s message doesn’t employ this standing army of professional crafters. They are ticked—a response proving their essential self-importance to those who suspected as much.

Trump appeals to Republicans weary of ideological purity, who pretty much just want a job.

Trumpism proposes that American industry produces enough jobs for everyone—but that industry has seized control of public policy, in part by funding insiders of both political parties, to direct those jobs to cheap labor. The labor is either imported—in violation of America’s immigration laws—or the work is exported, under the free trade agreements in bipartisan Washington vogue for a quarter century.

On foreign policy, Trumpism declares “America First.” No more spilling blood or treasure on foreign shores because everyone at the Georgetown Starbucks thinks it’s a great idea to use the American military to face down radicalism in hope that it replaces itself with a committee of concerned adults who make decisions by democratic vote.

These themes ring true for Republican voters. If trade policy and foreign policy put American interests first, it is thought, then maybe all those jobs in China will plant themselves in the abandoned and decaying landscape that was once Detroit.

Republican voters are mindful, too, that Donald Trump seems uncowed by the accusations hurled at him. The voters are intrigued that, unlike the other revolutionaries they have dispatched to Washington, Donald Trump may actually bull his way through criticism, parody, and dark questioning of his motives—to actually do something when he gets there.

The level of hyper-sensitivity in American politics is such that voters are in the mood for a bull. When calls to enforce immigration laws passed by the United States Congress and signed by the President get you branded a “racist,” Trump supporters believe there is something wrong with the system.

Win or lose, what comes next will at least be a must-see moment in popular culture. To my Democrat friends who are not yet comfortable with this large personality doing donuts on the ground of their sacred world of politics: I bet you’ll watch.  And that is the best explanation for Donald Trump’s emergence from the droning sea of noise that daily surrounds us. 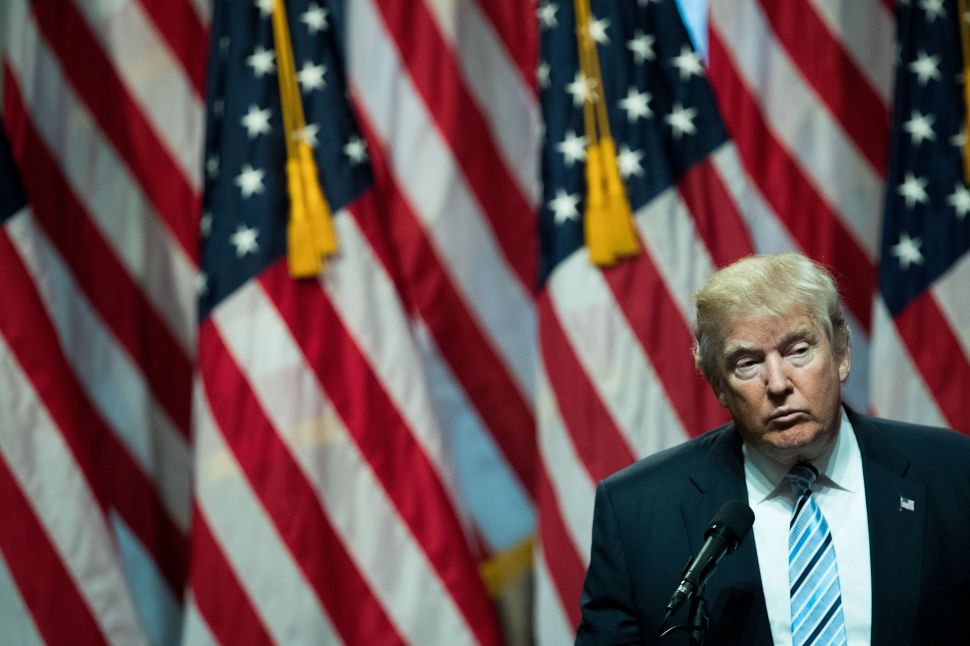