“It’s readable and actually puts things into everyday language, not political doublespeak, so the American people can understand the problem. It explains the issues and offers solutions. Something scholarly books almost never do.”

January 1st, 2015: President Al-Sisi of Egypt talks to religious leaders of this country and gives a passionate request for them to help renew the vision of Islam. A call to stand up against violent radical Islamist ideology…a way of thinking that uses a handful of ideas from the Quran and distorts the objectives of Islam; an ideology that has crept into too many dark corners of the world.

“I am referring here to the religious clerics. We have to think hard about what we are facing—…It’s inconceivable that the thinking we hold most sacred…be a source of anxiety, danger, killing and destruction for the rest of the world. Impossible!

I am telling…You need to step outside of yourselves to be able to observe it and reflect on it from a more enlightened perspective.

President al-Sisi is among the leaders of the world that LTG (Retired) Mike Flynn thinks we need to rally behind and partner with. For this, is a global problem and its growing each day as some international leaders try to deny its existence.

For Flynn its clear, “We are in a world war, but few Americans recognize it, and fewer still have any idea how to win it.” It’s bigger than ISIS—they are just the top group today following this twisted ideology.

This book is concise and straight to the point. It’s not politically motivated but rather patriotically motivated. This is about Flynn’s grandkids, not the current DC elites. I know this because we have talked about why he wrote it and I know Mike Flynn pretty well.

He outlines the problems we face, the flaws of numerous administrations in tackling the problem and the solutions we need to follow to stop the global spread of the violent radical Islamist ideology followed by ISIS and its colleagues and supported/ignored by too many nations. He outlines the vast network of countries from Russia, to Iran, Pakistan and Brazil that play a part in allowing the spread of radical Islamism for various reasons that are not always obvious. He explains how it’s funded as well.

A must read. I wish every presidential candidate had asked for his guidance during the campaign and especially wish that President Obama had listened to him when Mike Flynn warned of the rise of ISIS and their loose network of colleagues and the carnage we are seeing globally today, back around 2012-14.

LTG (Retired) Flynn has seen the enemy face-to-face to include the senior leaders of groups like ISIS. No other military member active or retired understands the enemy this well. His job for nearly a decade was to focus on the groups around the world that were operating according to violent radical Islamist ideology. He has studied the enemy and this is his sobering account of how far we have to go to defeat them.

That knowledge is why he states that, “political correctness forbids us to denounce radical Islamists, and our political, opinion, and academic elites dismiss out of hand the very idea of waging war against them.”

Now and again in this book Flynn and Ledeen use some terminology I, as a Middle East specialist, don’t agree with but I understand what they are saying…because I actually read the entire book carefully over the last two weeks. I don’t personally use the terms jihad or jihadi to describe the enemy that has declared war on the world. Violent radical Islamists want to be called jihadists because that is a term of honor in Islam, in its truest sense. I don’t want to ever honor these evil animals. I also prefer the term radical Islamism over radical Islam because I am pushing people to use very precise language to identify our enemy, to segregate them from the millions of peace-seeking Muslims on the planet and to undermine the ideology (radical Islamism) that ISIS and their colleagues employ. I did not let these differences of terminology distract me from the deeper context of the book which clearly segregates the vicious murderers that adhere to violent Islamist ideology from those who peacefully follow Islam as a religion.

In the end the violent radical Islamists are calling themselves jihadists (they think they are soldiers fighting for God and under his command), and these “jihadists” think they are fighting the end of times holy war as warned of by the Islamic Prophet Muhammad. They think they are pre-destined to win. That the entire Muslim world is going to join them in a battle against everyone else on the planet. That is the ideology we must undermine, we must disprove their narrative.

That is what Field of Fight is about. Understanding the enemy the world is facing in a war most don’t even want to acknowledge is occurring. It’s about understanding their allies, and the network of violent radical Islamists operating around the globe. Analyzing this problem and offering solutions to win this war we have been engaging in (in a half-ass manner) for 20 years. And finally it’s about what kind of leadership that will be needed to win this war.

Mike starts the book describing how he was formed as a leader for 33 years in the Army and even in the early years of his life. As to Mike the leader; I know where he was raised and by whom—Fort Bragg. I was privileged to work directly for or under some of the same great leaders who taught Mike to give subordinates autonomy and also the power of trust in organizations. Leaders like McNeill, Vines, Shelton, Petraeus, and McChrystal were not afraid to have a subordinate give them bad news about their plan. They knew the enemy has a say in war and that every plan and strategy must evolve…or unnecessary lives are lost, both military and civilian.

From this book some points are reinforced about leadership. Giving bad news to your boss is uncomfortable but the duty of every patriot. We cannot solve a problem we deny exists. If your boss fires you for being honest…it says a lot about your boss.

This book also described the critical change in one of our premier special operation units that occurred in Iraq when they shifted towards intelligence driven operations and exponentially increased the number of missions and the success rate of those missions. Flynn suggests we ramp up this model across all agencies so we can stop working at cross-purposes in our government. He knows this war requires every possible element of the United States government and the help of the citizens themselves to win.

His insights from decades in the Intelligence Community are spot on and create a recipe for upgrading our capabilities. More autonomy for well-trained subordinates, no restrictions or censorship of analysis findings so that policy makers get an honest assessment, and hiring and retaining the daring people that can carry out the risky missions faced by our experts. But beyond that he offers two critical goals for the senior policymakers and leaders that direct the US Government. Provide clear policy, strategy, and objectives and make the tough decisions in a timely manner to utilize the intelligence provided. This world moves too fast for cloudy visions and a sloppy decision making process.

To win this war we need to unite the entire world against the global movement of groups following violent radical Islamist ideology. It can be done and after such a bloody Ramadan we might be at such a tipping point. Flynn and McChrystal offer an example of a key tipping point in Iraq. One of their fellow senior leaders was Sir Graeme Lamb from the UK Army. He was trying to figure out how to get the Sunni tribes in Iraq to stop supporting the Al-Qaeda in Iraq element in Anbar province. A crusty Iraqi Sunni leader who Graeme didn’t particularly get along with told the Scotsman, “You are a force of occupation…We must resist you… but we have been watching you for 3.5 years and we have discussed this around the Arab region…We have come to the conclusion that you do not threaten our way of life. Al Qaeda does.” With that the awakening moved into top gear and the downfall of AQI was assured. Flynn urges us to do this on a global scale…the discussion and alliance part not the occupying force piece. The key to this is attacking and undermining the radical Islamist ideology that anchors the global movement of mass murderers and terrorists.

In the end Mike Flynn (often called the People’s General) reminds the reader about the most crucial part of our national security system…The American Soldier. As he recalls at one point in a special unit he saw the intelligence team was just failing their needs, he observed those special operators and thought. “Thank God they were so brave, ingenious in how they executed their mission, extremely well trained, and innovative. There is something about the American Soldier—despite our best efforts to shit on them, they rise to the occasion and perform miraculously.”

Flynn urges us to have faith that the American warrior can be unleashed and the massive global network of violent radical Islamists and their cohorts from across the spectrum of evil can be extinguished. But not through force alone, as tough diplomacy will be needed to get allies to help us in this fight. And not without excellent intelligence, for no amount of precise violence will stop these murderers if they evade our grasp. At the center of the entire campaign Flynn describes the activity of getting the global population to join together and undermine the ideology of violent radical Islamists.

The Field of Fight: How We Can Win the Global War Against Radical Islam and Its Allies 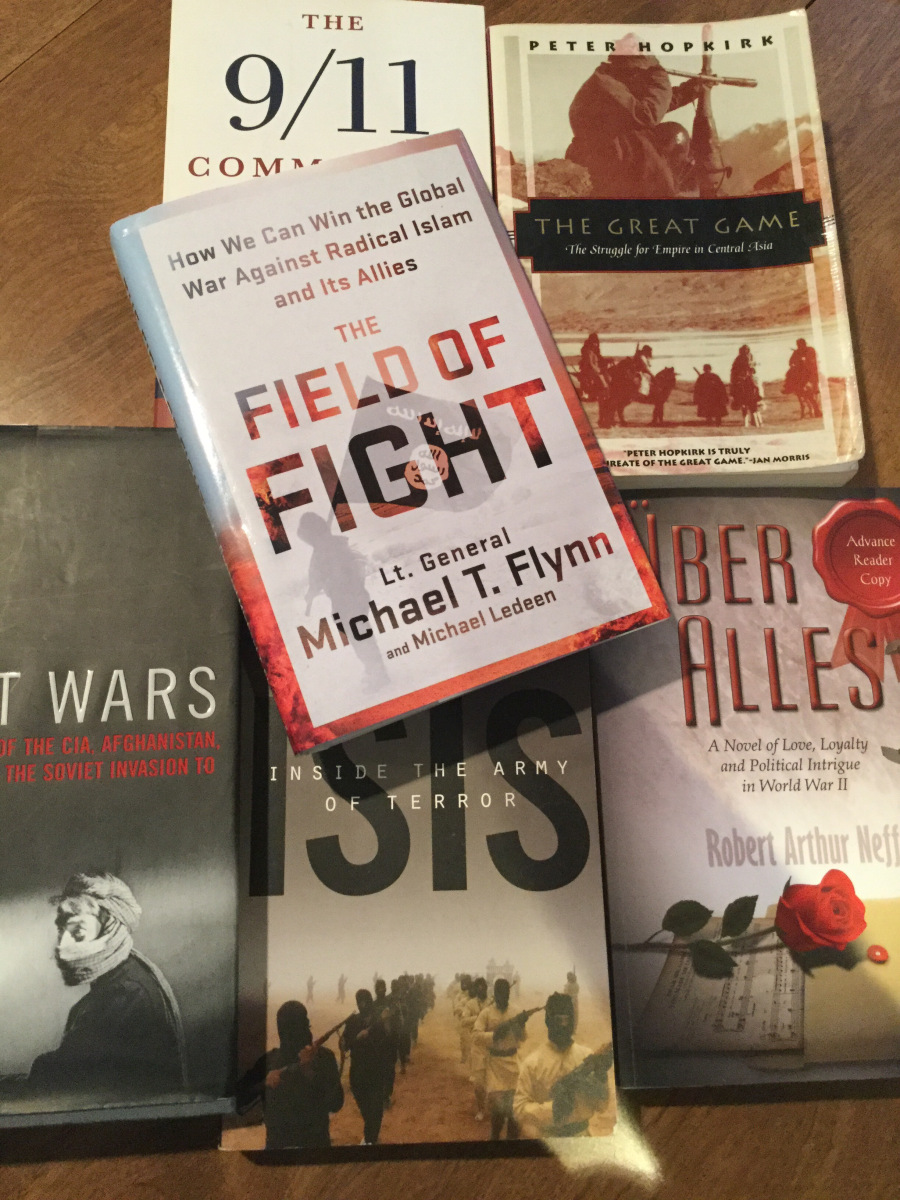