The magic moments at this year’s 4Knots Festival didn’t happen on stage, but in the crowd.

Last weekend, the sixth iteration of the Village Voice‘s annual daytime music party returned to The South Street Seaport, after a criminally under-attended year as a paid festival at Hudson River Park, and it was that much better for coming back to downtown.

Were the crowds between stages unwieldy? Yep. Was there an odd mixture of tourists taking taxis and Circle Line cruises commingling with all the crusty teens? Sure thing. But was there discovery, in its purest form, that good-old cross-cultural menagerie of mutually digging shit with weirdos th0se high-priced shows and the commodification of culture in this city have all but done away with? Therein lies the wonder, the fun, nay, the blessing of free music in New York city.

To be fair, the Village Voice has been throwing these kinds of parties for much longer. Its previous flagship summer party, Siren Fest, went down at Coney Island from 2000-2010. As a college student in Boston during those years, this was a decidedly cheap and fun summer trip down to New York. Another commute to Coney Island was nothing after that long Fung Wah bus ride, and once we got there it was hard to tell where the music fans ended and the boardwalk freaks began.

The cultural contrast at 4Knots this year was a bit more stark between different walks of life at the South Street Seaport, but that’s what made it great.

Jamil Rashad’s electro-funk project Boulevards already had the party at full swing at the Fulton Street stage upon my arrival, and the scene was a refreshing contrast from when he played to a tiny crowd at Northside Fest.

My main gripe with that Northside set was that Rashad had reinforced how ready he is for the big time with his stage presence and attitude, but he was just playing with a DJ. At 4Knots he added a guitarist and drummer into the mix. They didn’t do much besides accent the recorded tracks with a little live texture, but the level of energy those extra players brought to the songs can’t be discounted. Lily-white German tourists frolicked alongside hobos. High schoolers heard funk music for the first time and boogied accordingly. Rashad’s evergreen move of jumping into the crowd and making sure the party stayed lit only further reinforced why his awesome record from last spring is called Groove!.

Meanwhile, Kirk Knight of Joey Bada$$’ crew Pro-Era finished up a solo set over at the main stage, dedicating a song to the memory of friend and fellow MC Capital Steez. By this point, the taxi line, which ran to the pier behind the main stage, was reaching its peak length. Some of these little boys and girls in line might never have heard the words of Brooklyn’s Knight in any other reality, and watching them bob their heads reminded me what communal live music in this town is all about.

My friends have been telling me to check out Athens, Ga., band Mothers all year, and I’ve been digging their debut When You Walk A Long Distance You Are Tired for a few months now. Front-woman Kristine Leschper commands the band to swell and soften with the intensity of each line she sings, and among the plethora of entitled art-school kids writing shit cheese poetry about loneliness, Leschper stands out as a truly singular voice.

A lyric like, “I felt you for a little while, but never had the guts to give myself up,” has contexts both explicit and psychological, while the urgent, clear delivery of Leschper’s words never quite lets you know where her head is at. Hence, Mothers functions as a band of complexities and nuance despite wearing their hearts on their sleeves.

Back at the Fulton Street stage, mustachioed producer Roger Sellers was finishing up a killer set as Bayonne, live mixing his electro-pop with a level of energy and wonder that puts most producers to shame. Sellers reminds you that an electronic artist doesn’t have to delegate themselves to the DJ camp if they’re actually mixing and getting into it.

Waving his arms around like a holy man and casting shapes, summoning swells and waves of sound with his hands like Mickey Mouse conducting as The Sorcerer’s Apprentice, Bayonne entranced walk-ins with his celestial vibes. Wiping the last bits of brisket from their beards, the throngs from Fulton Street Market’s adjacent high-end Smorgasborg food court slowly migrated closer to the stage, forsaking their savory BBQ in pursuit of new music.

Matador’s newest darlings, Car Seat Headrest, carried on the rich tradition of slacker ’90s music that 4 Knots and Siren have cultivated (is Stephen Malkmus the reigning VIP of these festivals?) and brought the largest crowd of head-bobbing teens to the fore.

Frontman Will Toledo still has very little time for banter or interaction with the audience—he puts all his energy into the music. Talking to Toledo earlier this year, it became apparent that his most “punk” move with CSH is infusing meaning into his songs. Anti-drunk-driving PSAs and personal quests for spiritual understanding tend to not keep the cool kids engaged for too long, but Toledo’s not only found a way to remain his nerdy, searching, quasi-religious self in his music—he’s even getting apathetic kids into it.

Next, as Protomartyr took the main stage by storm as easily the “heaviest” band on the lineup solely for playing music that falls under the “angular post-punk” umbrella, I was suckered onto the adjacent rotting VIP pirate ship, The Peking, with the promise of an open bar.

The South Street Seaport Museum owns the permanently docked, four-masted barque that used to make repeated trips from Europe to the West Coast of South America, “filled with guano for use in the making of fertilizer and explosives.” That afternoon, it was filled with band members, publicists and journalists. Go figure!

Drinking and watching Protomartyr from on deck, the line of tourists filing off the just-docked Circle Line cruise was immediately contrastable from the crowd. A young blonde boy covered his ears as the band went into “Cowards Starve,” while an older woman in a burqa seemed to be enjoying the band as much as the next teen. She stood up on a metal partition with her iPhone and began filming, lightly bobbing her head.

All told, though, the weather wasn’t that bad. The overcast sky kept the pier from turning into the sweatbox it often became during years prior, and there were so many sponsored booths handing out beverages that you couldn’t have been dehydrated if you wanted to. Califa Farms cold brew, Nesquick, Polar seltzer, Pepsi, and Monster were all handing out free samples at the cluster of booths occupying the main artery between stages, a smart move concentrating the advertising to one section of the seaport and moving them farther away from the stages than they’d been in years prior. (There were still a disproportionate amount of port-a-potties to free beverages, nonetheless; this is a music festival in Manhattan we’re talking about.)

Who pays for this, a friend asked when we realized how little money we’d spent that afternoon. On the banner above the stage, a white signature identifying “The Howard Hughes Corporation” stuck out from the other sponsors. The real estate development firm founded by the storied American entrepreneur and famous recluse Howard Hughes owns Pier 17, and the fact that Village Voice was able to work out some sort of arrangement with them (even as the old mall is being completely gutted and redone) remains something of a miracle.

Back on the Fulton Street Stage, Alexander Brettin’s Mild High Club finished a set of groovy summer yacht-rocky vibes. While there’s a lot of musical similarity here to the low-fi crooner schmaltz of Mac DeMarco and the brightness of Beach House, Brettin leads the band into a place that cares more about the groove and the vibe.

Their debut album, Skiptracing, comes out next month on Stone’s Throw Records, a label that MC Peanut Butter Wolf originally used as an outlet for hip-hop that has lately been branching out into other genres. It’s tough to tell if Mild High Club’s sound will hold up year-round just yet, but as far as summer vibes go, you couldn’t do much better.

Back over at the main stage, a tepid crowd was singing along to songs by The Strumbellas, the Juno award-winning Canadian band that’s been described by the press as “folk popgrass,” which I pray is not a real thing. Like a marriage proposal on The Price is Right, this band just reeks of daytime TV dreck. May they never cover Jay Z again.

One of the big problems with the sponsor booths moving further away from the pier was that there was a big open area for the cops to watch the crowd from (hence no one was drinking outside of the designated area, and surely no one was smoking weed). But The Strumbellas were so fucking lame that even the beat cops, who were there all day and ever-vigilant, decided to leave. Smoke ’em if ya got ’em.

Pre-gaming for the headliners on that stage, Guided By Voices, you still couldn’t touch Robert Pollard. Pollard put his classic indie-rock party band back together with new names under the original name again early this year (how many times has he disbanded and reunited GBV?) going through classic cuts like “Game of Pricks” and “Tractor Rape Chain” in equal balance to his numerous other projects like Boston Spaceships, and drinking steadily throughout the 28-song set.

Admittedly, I’m not the biggest GBV fan. I get the appeal of those older records from the same kind of American party-rock band vibe that would later inspire bands like The Hold Steady, but I can’t get behind more then half of his disco, and GBV remain an “I like their earlier stuff better” group in my mind. Still, the vast sonic touchstones Pollard has hit throughout his 30-plus years of making music perfectly sum up all the different faces of modern indie rock, most of which were represented at 4 Knots. I think my favorite moment was when he called one of his guitarists “Bon Iver Junior.”

Would Howard Hughes have approved? I did see one older gentleman bobbing his head to GBV from his Rascal scooter. But really, when a giant real estate development firm allows something like this to happen on their turf, who cares what massaging may have happened to allow it.

If Hughes were still alive, perhaps he might have emerged from his self-imposed public exile, leaving behind his urine-filled mason jars to join the party on his pier and bob his head in unison. 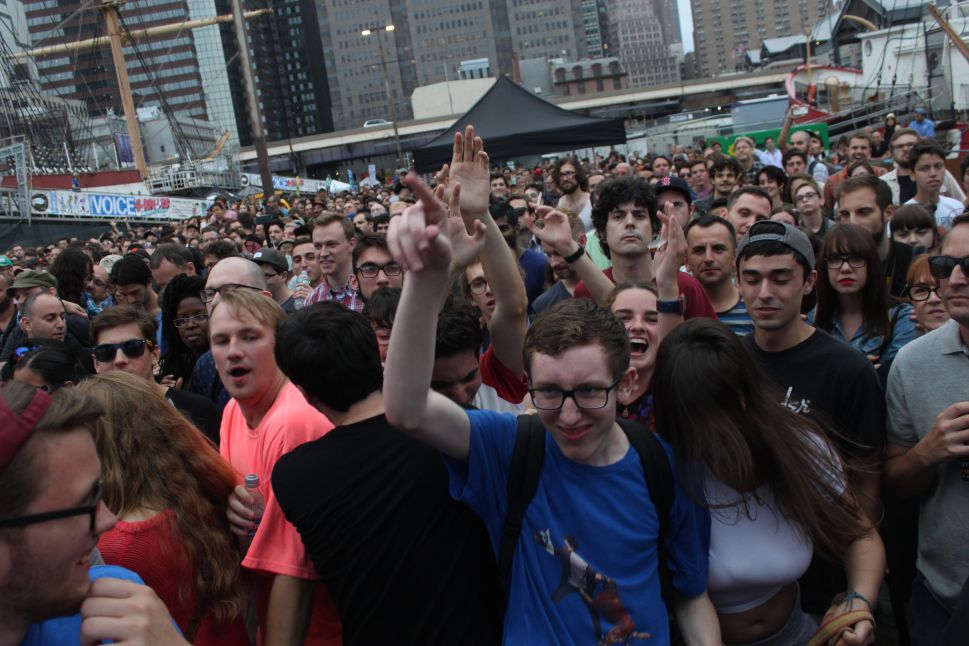