With the two major-party presidential candidates both hovering under 40 percent average approval ratings—and a recent Reuters/Ipsos poll showing more than a fifth of likely voters unwilling to vote for either—some think this is the year a third-party candidate could make noise. And it is Libertarian Gary Johnson, the former Republican governor of New Mexico, who appears poised to benefit.

In seven polls taken from June 26 through July 12, Johnson has averaged nearly eight percent, and in the three most recent, he is averaging more than 10 percent. The threshold to qualify for the presidential debates beginning in September is 15 percent, and Johnson and his backers believe that if the onetime governor could get on the stage with Democrat Hillary Clinton and Republican Donald Trump, he could skyrocket.

History suggests that such a feat might well be a stretch, though. Generally speaking, third-party and independent candidates who have won unusually large shares of the November vote have seen their highest polling numbers in the summer, only to fade out as the Republican and Democratic conventions concluded and the campaigns began their shift toward the home stretch.

The most recent examples of this third-party fade can be found in the 1992 campaign of billionaire Ross Perot and the 1968 campaign waged by segregationist Alabama Governor George Wallace.

In 1992, matched up against unpopular incumbent Republican President George H.W. Bush and his baggage-laden Democratic challenger, Bill Clinton, Perot found himself leading the pack in June, with Gallup showing him at 39 percent. Bush and Clinton trailed badly with 31 percent and 25 percent, respectively. Perot, who temporarily—and bizarrely—dropped out of the race before reentering late, ultimately garnered just under 19 percent in the final vote totals. While that was still the second-best third-party showing in U.S. history, it represented a loss of more than half the support polling showed for Perot in the summer.

Going back to 1968, Wallace surged to around 23 percent in some public polling during the summer, but ultimately finished with just under 14 percent in November. Although Wallace was never considered a serious threat to actually win the election, the real point of his campaign was to win enough Southern states to deny either Republican Richard Nixon or Democrat Hubert Humphrey the required number of electoral votes to prevail. Had Wallace succeeded, this would have thrown the election into the House of Representatives, where Southern delegations could extract concessions on civil rights. But with his late fade, Wallace prevailed in only five states (Alabama, Arkansas, Georgia, Louisiana and Mississippi), and Nixon swept most of the remaining Southern states to win the election.

It is also important to note that Johnson garnered only 0.99 percent of the vote when he ran as a Libertarian in 2012, and it is highly unusual for any third-party or independent candidate to exceed that total. But 2016 is shaping up to be an unusual year in which disaffected progressives and alienated establishment Republicans might be shopping around for another option. It is probably safe to say that Johnson will set a record for the highest percentage of the national vote won by a Libertarian since the party’s founding in 1971, but that’s a low bar: 1.06 percent in 1980.

Johnson may well smash that record in a big way, if we look at his double-digit polling numbers in recent surveys, but history indicates those numbers are likely to fade after Labor Day, and very likely for the same reason the Wallace candidacy faded in 1968. As that election wore on and it became clear to even Wallace’s most deluded supporters that he couldn’t win, many of Wallace’s potential voters decided to support Nixon rather than “wasting” their votes. As a result, Nixon won the Carolinas and Tennessee narrowly over Wallace, and Ohio, New Jersey and Missouri by a slim margin over Humphrey, to secure an Electoral College majority.

Additionally, it is worth noting that upwards of 13 percent of voters expressed an intention to support neither Barack Obama nor Mitt Romney in 2012, but ultimately, only about two percent voted for other candidates. The current 21 percent who told Reuters-Ipsos pollsters they do not plan to vote for either Clinton or Trump is likely to fade significantly as it becomes clear that one of those two candidates will be elected president in November.

History isn’t always instructive, it is true. Before 2004, no president who had been elected despite placing second in the popular vote had ever won a second term, and that historical rule went by the boards with George W. Bush’s victory over John Kerry. Rules, as it has often been said, are made to be broken. However, history shows that Johnson, who is currently topping out around 12 percent, will face a tough battle to push his numbers over the 15 percent threshold needed to land him on the debate stage. If things do not get any worse for Clinton or Trump, Johnson’s odds of getting on that stage appear long. 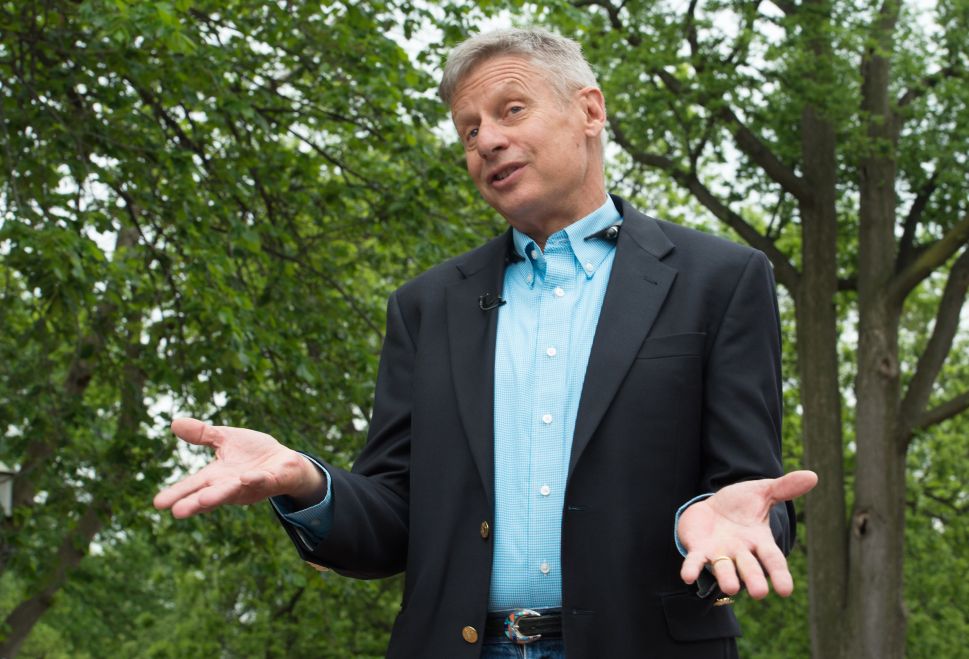