George Watsky is the same person in conversation as he is in his music, and I’m not just talking about his trademark lisp. Maybe it’s because the San Francisco-born poet-turned-rapper-turned-author writes such candid rhymes they welcome us into his psyche and all of its quirks.

Speaking with Watsky, the philosophy behind his lyrics is as present as his distinctive voice. In an age where performativity is the norm, it’s refreshing to hear someone who actually seems to live the way he presents himself in his art.

The Observer recently caught up with Watsky over the phone to discuss his first book of essays How To Ruin Everything and his upcoming fourth studio album x Infinity, out in August. One of the most exciting voices in alternative hip-hop for years, these releases are a double whammy that position him for a new decade (he turns 30 in September) of success.

What do you see as the relationship between How To Ruin Everything and x Infinity? Why are these works the ones that you’ve made right now in your life?

One of the messages on x Infinity is that I’m at this point in my career where every time I have a creative impulse, I’m challenging myself to follow it and not let the voice in my head that’s wondering whether it’s commercially viable win.

It was both that I wanted to try a new medium and that trying a new medium is, at its core, what my music is about right now.

I did something and it was successful. Now I need to evolve that. I thought it was very appropriate to put out a big piece that wasn’t music right before I put out this album, where one of the central points of it is just to keep pushing yourself creatively. X Infinity is a very ambitious album itself and there’s a lot of risky song concepts on there that I might not have had the nerve to put on previous albums.

One of them is “Stick To Your Guns”, which addresses gun violence and the archetypal cycle we go through as a society every time there’s a tragedy. We grieve in the same way, the politicians say the same things, the newscasters say the same things. And yet we don’t do anything.

So it’s a song pulled from three different perspectives: one, the perspective of a generic shooter writing his last will and testament; two, from a newscaster giving a speech about it afterwards; and then from a politician who’s eulogizing the event.

I just wanted to point out how consistent our pageant is around these events. I thought it might rub people the wrong way, both those who are pro-gun and people who are on my side of the aisle who thought it might be insensitive to even think about starting to empathize with the criminal in that situation. I got advice from multiple people not to include that in my album, but I did anyway.

Interesting that you’re bringing in the political aspect now. Our world is being so inundated with these terrible politics, and here you are making these statements.

I knew when I started working on this album that it was going to come out two or three months before the presidential election. I was really glad about that because I wanted to write about politics. It’s unfortunate to be feeling a little bit like a doomsayer, talking about the dark times that we’re in. But it’s an optimistic album at its core; well, it’s got a balance of optimism and realism. We’re sitting at a very precarious crossroads right now in our history and in the history of the world.

How do you approach writing differently for performance versus writing that’s meant to be read?

When I’m doing spoken word or music, I tend to perform work that’s fast, lyrically. It goes a mile a minute and I sort of come to expect that people are going to only catch a fragment of the references and the double entendres and the wordplay. With prose, you really have to slow everything down.

And [in How To Ruin Everything] I’m writing about my life in a way that is extremely on the nose. It’s like I’m not cloaking anything in metaphor. I really didn’t want to pontificate a lot and go off on philosophical tangents because I wanted the messages and the morals to be baked into the story.

Part of the reason I wanted to do that was because my next move after this book is hopefully going to be writing fiction and screenplays. I wanted to create a stepping stone for myself to that phase of my life.

Do you have any particular projects you’re working on, in terms of screenplays?

In my head, I have my epic science-fiction novel that I’m writing. My agents and publishers have their own ideas about what would be marketable when you’re moving from personal essaying into the next thing. Anytime you change genre, you have to in some ways start over from the ground and build up again. But you have to convince other people of what you’re seeing.

“The most important thing in my day is to remind myself that no matter what the fuck goes wrong, it’s all gravy.”

I also want to talk a little bit about gratitude in your work. It seems to be a major part of your mantra. You’re thankful toward your fans, your parents, your friends, your life experiences, but from you, it doesn’t seem fake the way that it does when, for example, Justin Bieber (or Conner4real) does it. How do you see gratitude playing into your work?

At this point, the most important thing in my day is to remind myself that no matter what the fuck goes wrong, it’s all gravy. Like, I’ve lived my dream. To be born onto this planet, which is already like winning Powerball based on the odds. I was the sperm that got chosen, you know? Beyond that, I was born to parents who said yes to everything I wanted to do and believed in me no matter what.

I’m an immensely privileged person. Not to mention the fact that I’m a straight white male who sits at the center of, like, every power structure possible. So I feel really grateful and lucky and maybe it resonates with people more because I talk about the fact that I fail in that gratitude all the time. But I am trying.

You say that and I believe it, because you believe it.

I do believe it. And if you’re a pop star from the time you’re 8 years old, and especially if you have this belief in God that you were anointed because you deserved to be anointed and you were chosen and everything happens for a reason, then you don’t think, “I’m lucky, this is amazing,” you think, “Well, I was selected, I am the chosen one, of course this happened.”

I’ve come across so many instances, in person and online, of people leaning on your work and connecting with it emotionally, especially when times get tough. Why do you think that is?

I can’t really say for sure. It’s an amazing feeling to know that people feel that way.

Where my validation comes from is the people who listen to my stuff and who connect with it. If someone responds to something that I’ve felt really powerfully, like a fear of mortality or self-doubt, it shrinks my world way down. I’ve been afraid of death for my whole life and if people are responding like, “I’ve felt that way my whole life, too,” it’s a good feeling to know that, for all those fears and terrors that you experience, you are actually in a much larger boat than it seems when you’re alone, in your room, in your head.

I attempt to take my vulnerabilities and fears and anxieties and put them into my music. I think that’s universal. It’s just part of the human experience, the terror and longing and sadness. But then it’s also making sure that you’re not defeated. Like you can experience it and feel it and still go forth and try and live a really joyful life. A lot of pop music is very one-note.

I think a lot of artists pick whether they’re going to do stuff that’s about despair or celebration, and its one or the other. There’s a huge amount of pop music that’s either all about the blackness of the soul or about how everything’s awesome all the time and we should just go party and we’re gonna be young forever.

You’re turning 30 in a couple months. What’s the most important thing that your 20s have taught you?

I lived a decade in my 20s where I worked so fucking hard. I’ve positioned myself to be in this place where if I don’t screw up, or if the world doesn’t end tomorrow, I get to keep doing what I want to do as long as I’m alive. I think I have this opportunity to live a much more balanced 30s than I lived in my 20s. We have such pressure now as young people to establish ourselves in the world early on, and I feel like I did that, and now I don’t have to grind my knuckles to the bone every day.

“If someone responds to something that I’ve felt really powerfully, like a fear of mortality or self-doubt, it shrinks my world way down.”

You have some of the most ravenous fans that I’ve ever seen at a concert. What’s the most ridiculous thing you’ve seen a fan do?

A woman gave me a bar of soap one time that was partly made from her own breast milk.

I’m not gonna editorialize that further.

Who was your first celebrity crush?

I don’t have a lot of celebrity crushes. I tend to pine over people in my real life that are unavailable to me. I’m lucky in that way.

Why do you think that is?

I don’t see [celebrities] as people that I’m ever gonna meet, so they just seem like cartoon characters. There are so many people in my real life who are more nuanced. I think I also tend to fall in love with flawed people, and celebrities are so often presented as these perfect individuals. That’s not super attractive to me. I fall in love with people with issues. 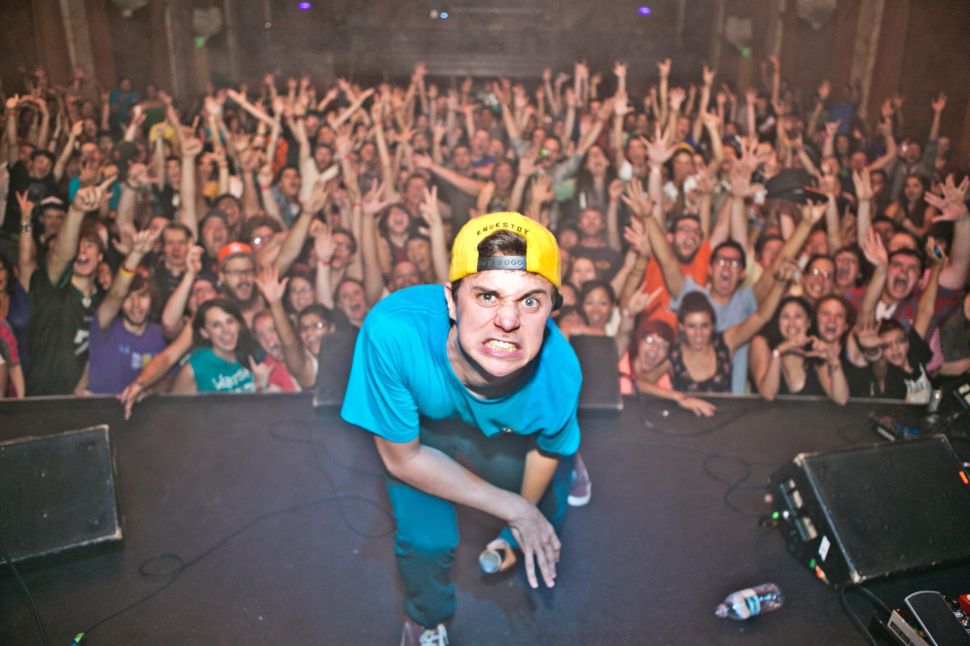