Losing your mind can be great for your music, so long as you get it back.

Some artists captured that moment of inspired lunacy but never came back, like Syd Barrett or Skip Spence. The likes of Daniel Johnston, Roky Erickson and Brian Wilson, meanwhile, kept going but always sounded forever changed. Either way, Uncle Neil was right—it’s better to burn out than fade away.

But it’s even better to burn out, come back and channel what you’ve learned.

Dublin four-piece Girl Band has had the post-punk snarl since 2012’s France ’98 EP, ghostly softness giving way to serrated angles, but two years ago things started to get really interesting.

2014 saw them experimenting with texture—drummer Adam Faulkner’s love of techno translated into some heavily mechanized, industrial pulses punctuating the songs with immediacy. Bassist Daniel Fox and guitarist Alan Duggan, in turn, mind-melded their instruments into textural devices of pattern and noise.

All the while, frontman Dara Kiely was losing it, living out of a tent in his parent’s backyard and thinking every word spoken to him was a metaphor.

“The whole thing is about being depressed at home and not doing anything and struggling with broken relationships and such but it’s kinda also that every song has a tone and I was chipping away at notebooks full of phrases so every sentence has a connotation back to something that would trigger something so when I play it live I can apply that,” he told Drowned in Sound last fall. “It’s kind of vague.” Thankfully, his mam made him write something every day during the whole episode.

All of which is to say, I’ve been waiting for Girl Band.

When their headlining jaunts last year were postponed due to health issues, I eagerly anticipated their return (friends who’d seen them open for the band Preoccupations, FKA Viet Cong, endlessly attested to their unbridled magic onstage). Last week at Baby’s all Right in Brooklyn they delivered, in a sweaty sold-out show on their way to Pitchfork Fest.

All the genres that Girl Band flirt with and then obliterate bring out the fans—fans of noise, post-punk and industrial sounds were all present. But such fans tend to stay sedentary at shows, arms folded, head nodding only slightly in approval. Girl Band’s greatest magic trick is the ability to get them bopping up and down, together.

Kiely’s mental vacation become the lyrical focus on last year’s wonderfully unnerving debut, Holding Hands With Jamie, and his brave transparency has been met with acclaim. Lyrics like the opening words of “In Plastic” document his episode with startling wit and honesty: “He lives in a tent/It’s silly quiet/It’s out the back/And farts in it/He takes his time/To hurry up/Professionally sad,” Kiely sings.

Jamie satisfies on a visceral level with tales from the brink, even at its most sonically confounding. It’s a testament to Girl Band’s chemistry that while Kiely was off, mind reeling, the rest of the group was composing waves of unclassifiable sound to accompany the madness.

When I caught up with Dara Kiely and Adam Faulkner before their set at Baby’s, the first thing that struck me was how funny they were. For all the heaviness of their music, Girl Band seem to really be enjoying themselves. It’s disarming to talk to someone who’s not only been on another plane of consciousness, but came back and channeled it into wisdom; these young men remain as endlessly captivating as their music, comfortably speaking to their tangents and weaving all of them into their work.

I’m really interested in talking about a psychotic episode from a place of clarity, because I may have had one in college and I’m grateful to have snapped out of it. I was hung up on the idea that every word we said had a negative or positive charge to it,  that if we could choose between different words for a conjunction or a descriptor, some had a heavier connotation than others—some were negatively leaning and some were positively leaning. Now I can talk about it and feel able to look back and say, “Wow, I was batshit crazy at that point in time!” Reading your story, Dara, that’s the sort of mythos of Girl Band surrounding this record. Can you talk about that a little bit?

Dara Kiely: Yeah, no problem. It’s kind of like a mid-life crisis as early as possible. I know what you mean about the negative and positive charge with words and their meanings. My thing was gestures.

Kiely: That would mean something.

Kiely: Like scratching a nose would mean “I know,” you know?

Kiely: Yeah! Everything would have intense meaning and metaphors. But I think the way I wrote before was very different, stylistically, to the way I wrote after. It was a lot weirder and a lot more interesting after, in my opinion.

But how do you codify that? I can tell right away that you guys don’t deal in genres, and as a writer, it’s very easy when someone says, “This sounds like jam-krautrock,” and you go, ‘O.K.!’ because you can write that down. But there’s no discovery happening for anyone. How do you deal with people trying to label you when all you know is you’re enjoying it? Where do you land there? Noise is a very general term.

Faulkner: Very broad, yeah. I suppose genres just make it easier for people, when you label something it just goes into that pocket with all that other stuff. Whatever makes it easy for people, really. We don’t get hung up on what people call us.

So you guys wanna make it easier for people?

Faulkner: “Neo-grunge.” It’s not something that fazes us at all though, when people call us that we were like, “Oh!” But we don’t know what we call ourselves, either.

You guys must get a lot more walk-ins to your shows back home in Europe than we do in the states. I don’t know what Ireland’s live music scene is like, but back here people book smaller rooms that sell out every time to build hype, and there’s a culture around the live-music ecosystem. But who’s the guy walking into a Girl Band show, who maybe sees the name on a marquee and thinks Posh Spice will be performing. He walks in, discovers you guys, and you fuck with him a little bit, don’t you?

Kiely: It’s a bit weird, but we played this gig, it was a filler gig on the way. We played the West Coast last time, and played with Jack Garratt, this EDM dude. And he was a great guy, nice guy, but we just didn’t really fit the bill. You could see everyone was really nicely dressed, lovely, and not liking us. Then there was one kind of strange dude in the back just going [Dara mimics him freaking out to Girl Band]…I thought, “Well, he’s gonna talk to me after!”

But that guy’s an emissary, he’s your fan club in that scene!

As long as there’s one dude everywhere you go you’ll be fine. Talk about the live show versus the record. Everyone who talks about you and has seen you play talks about you differently from those who’ve just heard the records. They talk about the way you play as raw and guttural, a truly unique experience. Is this outsider art manifesting itself, Daniel Johnston gone goth? Is this just performance to you?

Kiely: We all kind of get into our different worlds. I really only look at Adam now and again, but I don’t really look at Alan or Daniel, and we just kind of settle into that. It’s really strange because in practice and when we’re recording it’s incredibly collective. But when we’re onstage we kind of go into our own thing. So I don’t know where Alan or Danny are doing, and I turn around to Adam and he kind of smiles or whatever. That’s every gig!

So you’re kind of the de-facto bandleader in a way, the maestro.

Faulkner: When you listen to the record, some moments are really locked in and then there’s moments where the guitar and the bass is quite loose and free? Everything sort of ends up locking back in with the drums an awful lot, and the beat. Even in drawn-out sections there’ll be very minute things that we’ve over-rehearsed, little cues and things like that.

Hence the techno label I guess? If electronic music is a series of samples over a rhythmic beat, but you guys are noodling and making noises instead of triggering samples, the beat becomes a natural pulse that binds everything.

Kiely: Adam’s very into techno and afro-beat. It’s so reassuring to have a very solid drummer behind you keep everything O.K., and everyone else is really intense when you look at them in the crowd, hitting and punching each other. We thought we were making dancing songs, so we didn’t know what that was about, then we’d turn around to Adam and it’s a safe face.

Kiely: He’s got everything in order.

So you’re a translator in a lot of ways, Adam? The conduit connecting everyone in the band. How does that work compositionally? Dara, you coming down from the mountain with the two stone tablets after losing your mind for a minute, carrying this alien language you need to translate, and then parlaying it into this musical dialogue.

Kiely: The music came first, and everything after that was just my part that I had to finish. It just happened to suit the tone of it.

So it was serendipitous in a way?

Faulkner: The way I start out is sort of as syllables and stuff like that. So you’ve got little hooks and bits of melody, but there wouldn’t be lyrics attached to it. We feed off that when we write the music, the tonal melodic side of it, and usually by the time we get into the studio the lyrics are being finished.

That language is secondary to the music and by being so it’s affected by the music?

Kiely: Yeah. The way we sometimes write beats, Adam’s playing a thing and it’s sometimes like, “What are you doing with your left hand? Nothing with that bit. Do you have another limb you can do this with?” And then he does it like a trooper. He has a nickname, Buckaroo, now.

Faulkner: You know, Buckaroo, that old game you play with the donkey?

Kiely: Did you guys ever have that?

Faulkner: You have to hang all the stuff on him before he bucks?

Oh, a board game?

Kiely: Yeah! So we just keep piling on stuff for him to do.

So you’re like a plastic donkey’s ass just kicking shit into the air?

Kiely: But the nicest possible.

[We shut the tape off and smoke a cigarette. I turn the tape back on when something funny comes up.]

What did you just say?

Kiely: I was picked as Indie Dreamboat of the month for Fake DIY magazine in England. 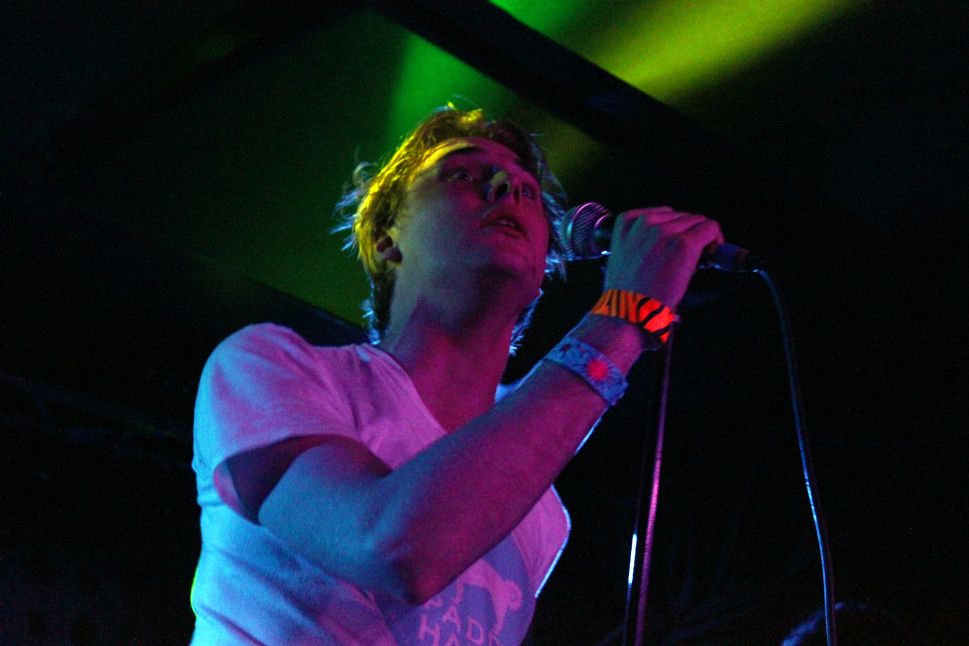