Gwen Stefani’s latest relationship might be as real as Taylor Swift’s new romance with Tom Hiddleston (say that five times fast), but it’s still captivating–and her recent resurgence led to the cover of August’s Harper’s BAZAAR. On newsstands July 19, the singer talks about divorcing her husband of more than a decade (Bush’s Gavin Rossdale), unexpectedly hitting number one on the country charts after years of experimenting with pop and ska, and why she doesn’t want to embarrass her brood; all while wearing couture, silvery hair and ditching her signature lip.

“It was so insane because not only did my family break up, but then my kids are taken away like half the time, so that was really like, ‘What?! What did I do?’ My dreams were shattered. All I wanted my whole life was to have babies, be married, like what my parents have. Then I remember thinking, ‘There’s gotta be a reason for this.’ Of course you go through the ‘Why me?’ and feel sorry for yourself. But then I was like, ‘No, this happened to me already and I made something good out of it,’ and that was Tragic Kingdom,” Stefani told the magazine. Her latest album, This Is What the Truth Feels Like, is no Tragic Kingdom, but it does have a few semi-truthful moments that are a grand departure from her past solo hits, including anything from her regrettable Harajuku Girls era.

Anyone who’s been a devoted listener knows Stefani’s focus has always been on children, marriage and the importance of family. With songs “Marry Me,” “Simple Kind of Life” and “Underneath it All” she revealed “an attraction to tradition, my vintage disposition,” and concurrently, a desire to give everything up for the right relationship. So, it came as quite a shock when the couple announced their divorce after years together–and even more surprising when she almost immediately started seeing country crooner Blake Shelton, who had recently split from his wife Miranda Lambert. While Stefani and Rossdale’s marriage was plagued with rumors of infidelity, and she dealt with a surprise love child and nanny affair speculation, it still seemed like a bit of a Los Angeles love story.

Now that she and Shelton are Instagram official, it’s been met with a bit of a backlash. With some calling the relationship a ratings ploy for their shared show The Voice, Stefani seems hell bent on convincing the public, and her fans, that their love is real. However, sometimes it comes off as faux, seeing as the happy couple is posting their every move on Facebook, until their followers are exhausted by the amount of selfies, declarations of love and date night photographs.

In the issue, Stefani reveals how the couple actually became involved. “[Backstage on the set of The Voice] Blake was like, ‘Everybody, before we go out there, I want to let everyone know that by the time this airs, I will be divorced.’… it was like being handed this gift of a friend who was going through the exact same thing at the exact same time. And then everything flipped. It went from horrible to, like, hopeful and like, ‘Wow, God, you just don’t know what’s gonna happen next,” Stefani said–and one can imagine her announcing the news in her signature Valley Girl drawl.

Inside the pages, Stefani describes her hit country single “Go Ahead and Break My Heart” hitting number one on the country charts. She also talks about keeping a low-profile so she doesn’t embarrass her children; but with names like Kingston, Zuma and Apollo, it’s possible that they’re already mortified.

The interview ends with a Taylor Swift twist. “[My personal life] was my boyfriend and then my husband,” Stefani told Harper’s. Perhaps, like Swift, Stefani simply needs a break. She could take time to construct a girl squad of her own. Perhaps Garbage’s Shirley Manson and Halsey would be a good fit, along with That Poppy, a cool teen/Stefani doppelgänger. After taking a bit of time off from dating, she can return with the follow up to Tragic Kingdom the world has been waiting for. But until then, she’s looking better than ever, just like the Benjamin Button she is–and this Harper’s photoshoot confirms it, even without her signature lipstick. 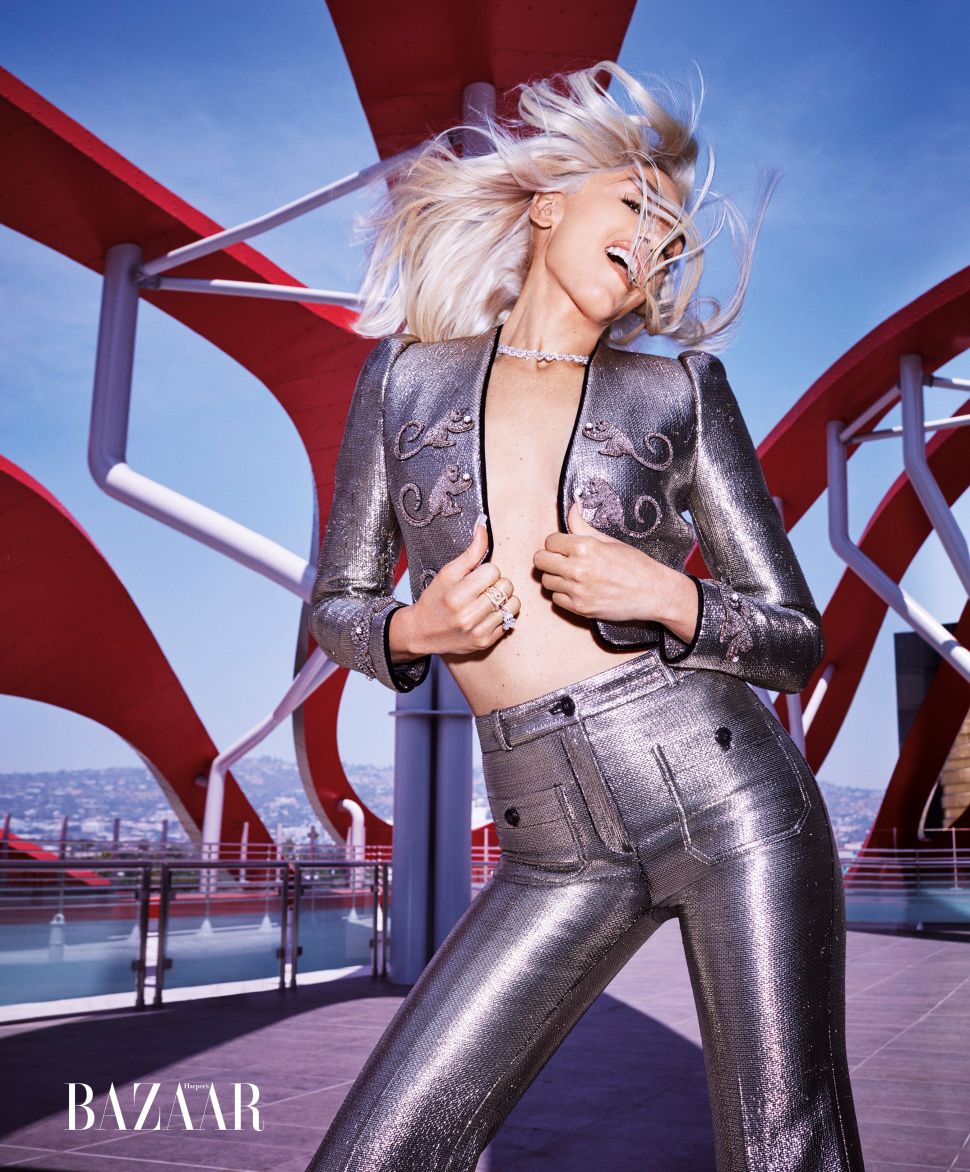