At the memorial yesterday for the five slain Dallas police officers who were murdered in a sniper attack last week, George W. Bush came out of retirement to deliver an impassioned, thoughtful eulogy, but media attention focused not on the former president’s surprisingly stirring words (“At times, it seems like the forces pulling us apart are stronger than the forces binding us together”), but rather his boisterous, joyful swaying and singing while the church choir belted out “Battle Hymn of the Republic.”

“You’ll notice that everyone onstage,” chirped Gawker’s Jordan Sargent, “is bowing their heads respectfully—everyone except George W. Bush, wearing a royal blue suit, who bopped along quasi-maniacally like the one person at a music festival set who clearly took too many drugs.”

Social media Emily Posts also gave the president harsh reviews: “Think George Bush showed great restraint by not marching in place while dancing to the Battle Hymn of the Republic,” sneered Andy Andrist. “Could he maybe be suffering from the beginnings of dementia?” wondered EventHorizonSurfer on Reddit.

We all grieve in different ways. Many people cry. Some bow their heads in silence and reverence. Others have sex with fellow funeral-goers. Apparently, George W. Bush publicly rumbas to “Glory Glory Hallelujah.”

Some of the prominent mourners on stage with Bush, including his wife, also seemed startled by the president’s Texas two-step, which admittedly looked a touch Ellen-esque. Michelle Obama, who had locked hands with the former president, handled the moment with aplomb. At first, she shot her husband’s predecessor a befuddled look, then she expertly improvised and served as a smiling, tolerant dance partner.

As the video of the memorial goes viral, and many commentators scold Bush for inappropriate behavior, this proud liberal must say…enough.

I agreed with few—really none—of George W. Bush’s policies; he must live with himself for lying the country into the Iraq war and his economic malpractice led to the great recession. But the attacks on his method of mourning strike me as cynical and churlish—the general mood in the country now. I felt the same way when the conservative media lit into Bill Clinton for laughing at the 1996 funeral of his Commerce Secretary Ron Brown, who tragically died in an airline crash while serving his country.

We all grieve in different ways. Many people cry. Some bow their heads in silence and reverence. Others have sex with fellow funeral attendees. Apparently, George W. Bush publicly rumbas to “Glory Glory Hallelujah.” Mr. President, bop all you want. Pay little mind to the bitter, petty critics who want to police our public servants’ every move. 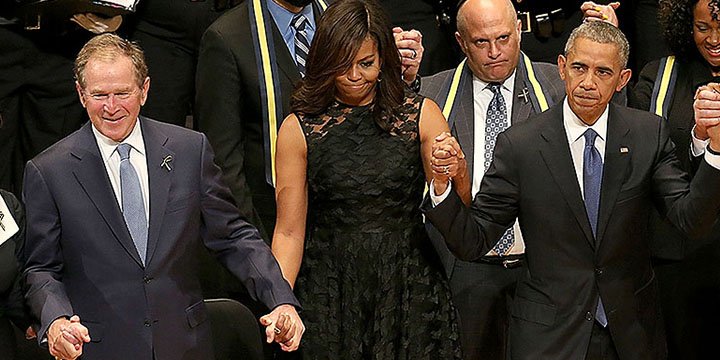