Hillary Clinton accepted the Democratic Party’s history-making nomination for president tonight with a speech that celebrated the milestone, laid out her policy ideas and ripped into Republican nominee Donald Trump, who she argued did not have the temperament to be president.

“Yes, the world is watching what we do. Yes, America’s destiny is ours to choose. So let’s be stronger together, my fellow Americans,” Clinton said tonight. “Looking to the future with courage and confidence, let’s build a better tomorrow for our beloved children and our beloved country. And when we do, America will be greater than ever.”

Clinton, a former secretary of state, senator and first lady, is the first woman to receive a major party nomination for president—something she failed to do in 2008 when she lost the nomination to Barack Obama. A public figure for decades, tonight she sought to introduce herself one more time: as someone looking to the future with hope and not fear, as someone who brought people together, as a policy wonk with specific ideas on how to move forward.

In short: as the opposite of Trump.

“America is once again at a moment of reckoning. Powerful forces are threatening to pull us apart. Bonds of trust and respect are fraying,” Clinton said. “And just as with our founders there are no guarantees. It’s truly is up to us. We have to decide whether we’re going to work together so we can all rise together.”

And Clinton argued she was the only candidate who was qualified to lead the nation in such difficult times—asking the crowd to ask themselves about Trump’s temperament, highlighting his outbursts at reporters and in debates and saying he “loses his cool at the slightest provocation”

“Imagine  if you dare, imagine, imagine him in the Oval Office facing a real crisis,” she said. “A man you can bait with a tweet is not a man we can trust with nuclear weapons.”

She talked about her policy ideas—her strategy for confronting ISIS and defending the country’s allies, plans for taking on college debt or reforming the criminal justice system—in an effort to paint herself as a wonk, noting Trump doesn’t talk much about his plans but that the crowd might have noticed she loves talking about hers.

“He spoke for 70-odd minutes – and I do mean odd,” she said. “And he offered zero solutions. But we already know he doesn’t believe these things.”

The theme of the night was “stronger together,” but there was not quite perfect unity in the room. Several supporters of Bernie Sanders interrupted the speech with boos or heckles; they were promptly shut down by loud chants of “Hillary!” by the rest of the crowd—a tactic used repeatedly during Clinton’s remarks.

But Clinton made a clear effort to appeal to those voters tonight, and to others who may not quite like her: “Some people just don’t know what to make of me.”

For Sanders voters, she noted her plan to work with Sanders on making public college tuition-free and for helping to forgive student debt. She vowed to pass a constitutional amendment, if necessary, to overturn Citizens United. She revisited the oft-used “I believe in science” line to promise to fight climate change, and said she’d protect Main Street from Wall Street. As she said those things, Sanders supporters in the California delegation held up a banner that said “Wikileaks,” a reminder of the hacked e-mails showing support within the Democratic National Committee for her campaign over Sanders’.

Clinton didn’t acknowledge the heckles; she at times waited patiently for the chants of her name to die down and at other times just spoke along with them.

The speech capped off a night full of moments intended to raise the stakes in the minds of voters, and emotional appeals that stirred the crowd—including a preacher who seemed to briefly transfer delegates in arena seats to parishioners in pews. But one moment stood out as particularly moving—Khizr Khan, the father of Muslim soldier killed at war, speaking about Trump’s plan to ban people like his son from ever coming to this country.

“Have you even read the United States Constitution?” Khan asked, before pulling a pocket copy from his pocket. “I will gladly lend you my copy.”

“You have sacrificed nothing,” he said later, his wife standing silently beside him, the crowd roaring and nearly drowning out his next words, “and no one.”

Clinton returned to that theme in her remarks, assailing Trump for mocking prisoner of war Sen. John McCain, a Republican, and for saying the military was “a disaster.”

A president should respect the men and women who risk their lives to serve our country – including Captain Khan the sons of Tim Kaine and Mike Pence, both Marines,” she said, name-checking her vice presidential candidate and Trump’s.

But while discussion of foreign policy allowed Clinton to take some her most pointed shots at Trump, it also allowed for some of the loudest protests from Sanders supporters. When General John Allen spoke, there were chants of “No more war” from pockets of Bernie Sanders supporters, clad in bright shirts. The rest of the crowd repeatedly drowned them out with chants of “USA!” The anti-war chants continued, from a smaller group, during remarks from a Medal of Honor winning veteran who lost his leg in Afghanistan.

But amid the division in her party’s ranks, Clinton pitched herself as a uniter.

“I will be a President for Democrats, Republicans, and Independents. For the struggling, the striving and the successful,” she said. “For those who vote for me and those who don’t. For all Americans together.”

There was perhaps one similarity between her speech and Trump’s. As he was introduced by his daughter, Ivanka Trump, she was introduced by her daughter, Chelsea Clinton. She spoke about what Clinton is like as a mother—recalling times her mother was gone for work and left notes for Chelsea to open each day she was gone.

“That feeling, being valued and loved, that’s something my mom wants for every child,” she said. “It is the calling of her life.” 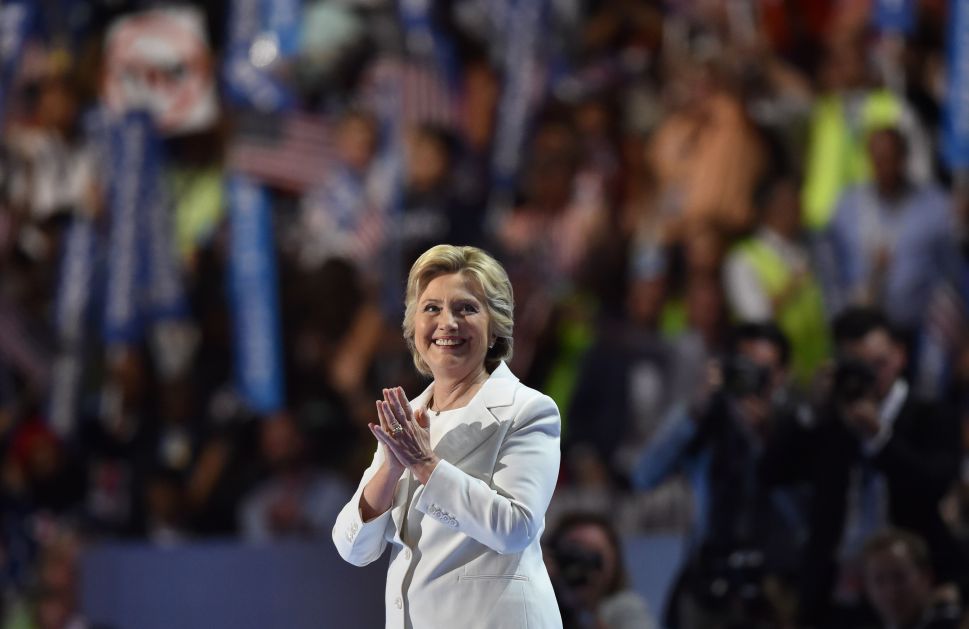