New Yorkers eat up to half a million oysters in local restaurants every week. However, what most people probably don’t know is that after they’ve shucked and guzzled, those empty oyster shells go on to help the city.

Not only did oysters used to be the native keystone species of New York Harbor, but they also act as filterers, provide habitat for other marine species and attenuate wave energy. Enter the Billion Oyster Project (BOP), the ever-expanding operation that is spearheading the race to reinstate oysters and reefs to the city’s harbor.

Formally established in 2014, BOP is a non-profit ecosystem restoration and education project that endeavors to restore one billion live oysters to New York Harbor by 2030. By securing would-be discarded oyster shells from top regional restaurants, curing and preparing them for reuse to grow new oysters—up to 20 per saved shell—to build habitat, the aim is to improve the quality of both the Harbor and the city.

“Billion Oyster Project aims to restore a sustainable oyster population and reignite a passion and appreciation for the Harbor by engaging New Yorkers directly in the work of restoring one billion oysters,” BOP director Pete Manilowski, Director of BOP, told the Observer.

To date, the Billion Oyster Project has reclaimed and recycled 250,350 pounds of shell, and restored an astounding 17,000,000 oysters. Oysters are ecosystem engineers, helping to clean up the quality of the —one adult oyster filters 40-50 gallons of a day. In other words, if you put a billion of them on the bottom of the Harbor, that’s a heck of a lot of cleanup. According to Samuel Janis, the BOP School Programs Manager, the state of the Harbor, the city’s main natural resource, is currently “much better than it has been probably in the last 150 years.”

“Oysters provide a concrete example of where New York has been, where it is now, and what we can do to get our ecosystem back.”—Elisa Caref, The River Project

Harbor and marine life have suffered disproportionately over the last century, degraded by pollution. However, since the passing of the Clean Act in 1971 prohibited the dumping of raw sewage and refuse into the Harbor there has been an emergence of large-scale restoration. BOP is determined to return the Harbor to the most productive waterbody in the North Atlantic and reclaim its title as the oyster capital of the world. Teaming up with organizations from all over the city over the past couple of years, the project has become a yardstick for the state and condition of New York Harbor.

“Oysters provide a concrete example of where New York has been, where it is now, and what we can do to get our ecosystem back,” said Elisa Caref of the River Project, which has been working for 30 years to expand awareness and conservation of the Hudson River Estuary and New York Harbor, and is also one of BOP’s many partners.

Over 50 of the city’s restaurants are now involved in the Shell Collection Program, donating their oyster shells each week for reuse. The OysterHood, another partner of BOP, organizes oyster-related social dining events for the oyster aficionados and “adventurous foodies of New York,” raising a greater awareness of food sources. “[We’re] building stronger connections between consumers, the habitats that support our food production and the producers themselves,” Kevin Joseph, CEO and co-founder of OysterHood, told the Observer.

“People realize that not only can they have fun and eat fancy food,” Manilowski said. “But they can also help restore the environment while they are doing it.”

Referred to as a “lighthouse project,” BOP has captured the imagination of a wide variety of people from all over New York. Something, says entrepreneur and marketer for the OysterHood Rudi Ehrlich, “that the rest of the country should be looking to.”

“We want to be able to eat the fish that swim beneath our boat and to once again pluck oysters out of the Hudson and eat them on the spot.”—Alexander Pincus, co-founder and CEO of Grand Banks

The project’s roots rest with the New York Harbor School, a public, maritime Career and Technical Education (CTE) high school on Governors Island. Surrounded by that’s utilized as its “living classroom,” its students are “the primary workers and planners” said Susannah Black, Communications Coordinator for the New York Harbor Foundation. They perform an active role in BOP—their six CTE programs, which include aquaculture and ocean engineering and robotics, conveniently represent the six fields necessary for large-scale oyster restoration.

Cris Pupello, 17, is approaching his senior year at NYHS and recognizes the significance of the opportunity. “We built these oyster restoration cages with our own hands. We all help each other out to achieve one goal, it all fits together”, he said.

“[They] have a tight grasp on this complex information and the work they are doing,” Manilowski said. “At BOP, there’s a commitment to involving young people in every aspect of the work.”

Now working with 54 different schools the city, BOP is capturing the excitement of students and teachers alike. 320 middle schoolers on June 10 gathered for the annual Symposium, a 50% increase from last year, all presenting their oyster restoration research, and sharing their excitement for the project. Intrinsic to the Billion Oyster Project’s mission of restoration is the ethos of stewardship and the passing on of that care and responsibility for the local environment.

The seasonal floating bar Grand Banks, which serves up oysters aboard an historic wooden schooner, is one of the many restaurants partnering with BOP.

“We want to be able to eat the fish that swim beneath our boat and to once again pluck oysters out of the Hudson and eat them on the spot,” Alexander Pincus, co-founder and CEO of Grand Banks told the Observer. BOP’s work and intention marks a watershed in the history of the city’s environmental efforts, galvanizing students, scientists and foodies alike for a common cause. “Restoring the oyster life, and in turn the overall health, of New York Harbor, benefits everyone in New York,” Pincus said.

Last week, BOP announced they are kicking off a new Community Reefs program, with several new reef sites around the city already getting underway this summer, to join the pilot reef off Governors Island. This intiative will not only accelerate the process of restoring one billion oysters to New York Harbor, but it will also enable more of the public to be involved. The aim is to bring people down to the shoreline and get them involved in the hands-on work of restoration and reef monitoring. 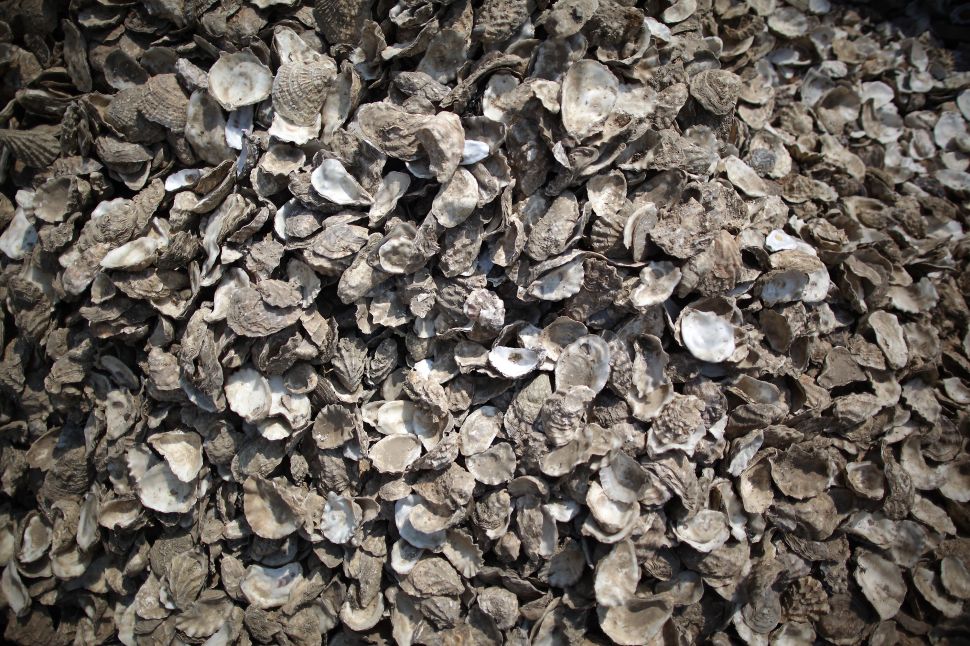