Tracing back to when he was just a kid, Jim Breuer was always trying to combine his passions. “In high school the dream was to go on a stand-up tour and front a heavy metal band,” he says from his home in New Jersey. “I always had that in the back of my head.”

Today, Breuer is doing just that.

A veteran of Saturday Night Live, where he spent a brief but memorable time with his impersonations of the likes of Joe Pesci and original characters like Goat Boy, Breuer is currently in a new phase of his career as part comedian, part disciple of heavy metal music. Not only does he host the popular podcast dubbed The Metal in Me, but he’s on the cusp of releasing an album, Songs from the Garage, with his band The Loud and Rowdy, which was produced by Anthrax’s Rob Caggiano and features AC/DC’s Brian Johnson, whom Breuer has gotten close with.

It features a variety of original metal songs, all with Breuer as frontman and his personal, comedic spin on the lyrics. (One track is called “Raising Teenage Daughter,” another is “Be a Dick 2Nite”).

Perhaps Breuer’s fearlessness comes from the fact he initially worked his show business muscles in the cutthroat world of stand-up comedy.

The son of a World War II vet, Breuer grew up in Valley Stream, Long Island, and worked in a rock club during high school. “I was an MC and also did the band thing,” he says looking back. “But it was really hard to keep a band, so my stand-up career took off a lot quicker than anything because I was able to control it easier. My dream was to be the biggest comic with the biggest band, touring together.”

Upon departing SNL in 1998, Breuer focused his efforts on touring his stand-up act.

Along the way he became a fixture on the Opie and Anthony Show, had his own Sirius XM show and spent time taking care of his ailing father who passed away in 2014. It was during a stint at Wacken Open Air, a world famous heavy metal festival in Northern Germany, that the idea of doing an album was hatched in his mind.

“I was invited to do stand-up so I went and was on the lineup with Slayer, Megadeath and Anthrax,” he explains, noting that at the time his routine centered on his family.

“I started doing impressions of Ozzy Osbourne and Lars Ulrich and the crowd went nuts. That was the revelation.”

“The guy who played before me got booed off the stage in front of a crowd of 5,000 people so I almost had an aneurysm. I made my wife and kids go away so they wouldn’t have to see my set and my wife asked, ‘Are you nervous?’ She goes, ‘Don’t be. Do the stuff you used to do with the impressions and the band. I went out and they booed when they first introduced me, but then I started doing impressions of Ozzy Osbourne and Lars Ulrich and the crowd went nuts. That was the revelation.”

Songs from the Garage is a reflection of this revelation. However, the album isn’t your typical metal fare, which is exactly the point. “Some metalheads would get upset with what I’m trying to do, but I’m trying to go mainstream metal and get it back on the forefront and put a little bit of a smile on it,” Breuer notes. “It’s all about the energy and the vented up aggression of movement. It doesn’t have to be scary. I’m not talking about slaying people and blood dripping.”

Lending a dose of metal credibility (metal-bility?) to the project is AC/DC’s Johnson who is featured on two tracks.

“In the studio he stood in front of me like he was at a concert singing his balls off in front of two speakers and no headphones,” says Breuer of the experience with the legendary voice. “We caught up later and he made dinner for us. He’s the most welcoming, funny, giving human being in my entire life. I’m not even kidding.”

Much to Breuer’s embarrassment, comments he made during a taping of his podcast went viral after saying that Johnson had been “kicked to the curb” by AC/DC. (Johnson was recently replaced by Axl Rose for the band’s current tour.)

“Brian called me and said, ‘My friend said Jimmy Breuer said you got fired. And I said that doesn’t sound like my friend Jimmy Breuer!’ I started sweating. Just the fact he had to call me, I was crushed. I put him in a predicament he didn’t need to be in. That absolutely destroyed me and I still think about it to this day.”

With the Johnson imbroglio behind him, Breuer is getting ready for a summer full of touring, including stints at Williamsburg’s Knitting Factory on July 18 and July 25.

“I know I’m not a rock star,” Breuer says. “I’m a guy in his late-40s with three kids who’s taking care of my mother. I’m a family guy who grew up with metal, and even though I’m domesticated I still have this in me. That’s why I wanted to make the album, because I know there are millions of us.” 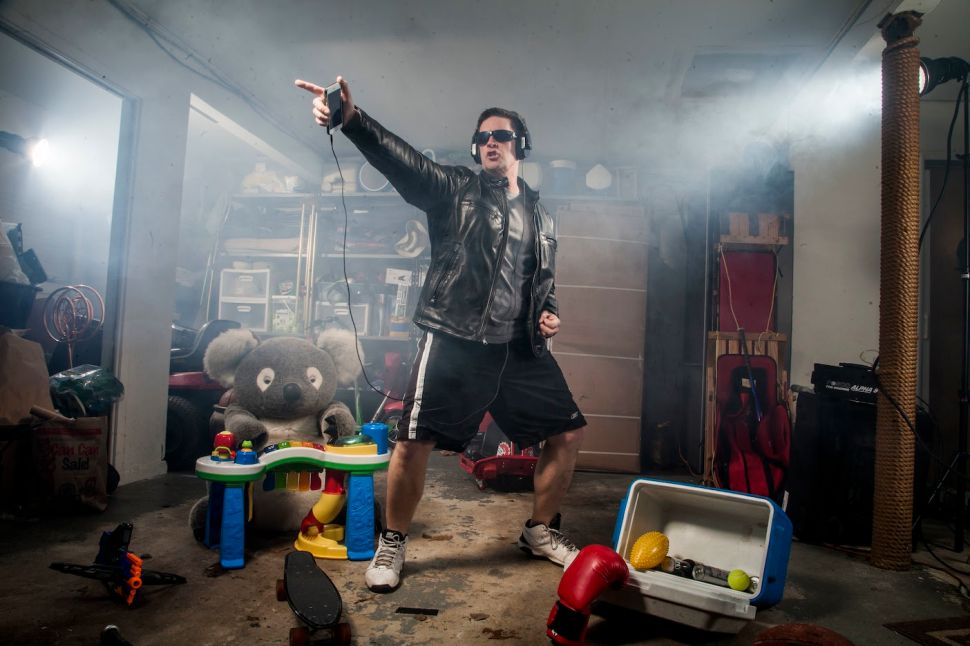