Let me be something clear: JoJo Fletcher is not a good Bachelorette.

She is good at some things that make her look like a good Bachelorette. She is good using a curling iron to create soft, loose waves in her long brown hair. She looks great in glittery beaded dresses, and she can somehow kneel in said dresses without falling over. JoJo is good at keeping her manicures from chipping, and riding horses, and giving us exposition about semi-exotic locations, and looking pretty when she cries.

But JoJo is terrible at this television show, which requires her to date thirty or so guys and dump all but one of them for our entertainment, all the while pretending to be thrilled at the prospect of getting married to someone she’s known for all of a month and a half.

Her record speaks for itself: first, she sent home Wells, the only guy on this show I would have wanted to date, let alone have a conversation with in a bar if we were to actually meet.

And last week, she proved, once and for all, that she is unfit for leadership: she sent home Luke, the last decent guy on this show. Luke (who will almost certainly be the next Bachelor), rode horses and was from Texas and treated her with the basic respect and interest that you’d expect in someone you were dating. He told JoJo he loved her, which, amazingly enough, sort of seemed like he meant it. But a fit of pretty crying later, JoJo sent him away with a brush of her well-manicured hand, bookending the experience with another round of pretty crying for good measure.

For who? For Chase? For a guy whose face can only conjure up the expression when the waitress asks you if Pepsi is okay, and you say yes but it’s really not?

JoJo seems like the type of girl who would be mean to me in high school, but still lend me a pencil if we were both in study hall with no one else around. That’s all I can come up with about her personality. I have been watching every single episode of this show, and if you offered me $10,000 I wouldn’t be able to tell you what JoJo does for a living. Is it marketing? PR? Some vague real estate title? I have no idea!

Who is JoJo? Try to name for me one thing she likes to do aside from reading cue cards about different locations in Argentina. Does she have hobbies? Has she ever read a good book? Or seen a movie—any movie?

And the sad thing is, it’s not really her fault. She’s probably a good, cool person, but The Bachelorette doesn’t ask her to be anyone other than a girl who looks good in a dress. And that’s  malarky.

This show turns its female protagonist into a cardboard cutout of a hot girl, devoid of controversy but also devoid of personality, so that it’s easier for 30 strangers plucked from Hollywood casting agencies to immediately trick themselves into being in love with her.

There is not any woman, no matter how beautiful, that 30 guys chosen at random would all be in love with.

And she is so Nice to the boys, never sassing them, never being sarcastic, never challenging them. She is the prize to be claimed by the alpha-male who can manipulate the right alchemy of making out, opening your heart, and getting on air.

I am tired of Nice, Pretty Girls who are Cool because they care about sports and love watching you josh around with her brothers.

America, I will be your Bachelorette. I will hold these assholes accountable and I will not fall for their tired, establishment politics lines. “I’m really falling for you,”—go back Washington, you establishment hack!  I am not easily wooed by lobbying groups or men who peaked in highs school. It should also be noted that I am not attracted to careers as former athletes. “Former” anything is not a job.

To ABC, the decision you’re facing is a challenging one. I know there’s a lot of me that you still need to see (how I look in a bikini, I guess?) but I am confident that the will of the American people will prevail and from the great state of Washington all the way to the also great state of Maine, one hashtag will ring out—a pledge, a promise, that we can, and we will do better. Say it with me: #DanaForBachelorette

Thank you all, and God bless the Bachelor Nation. 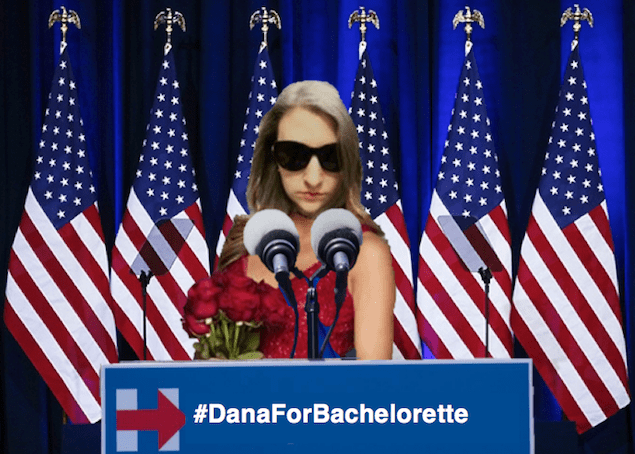