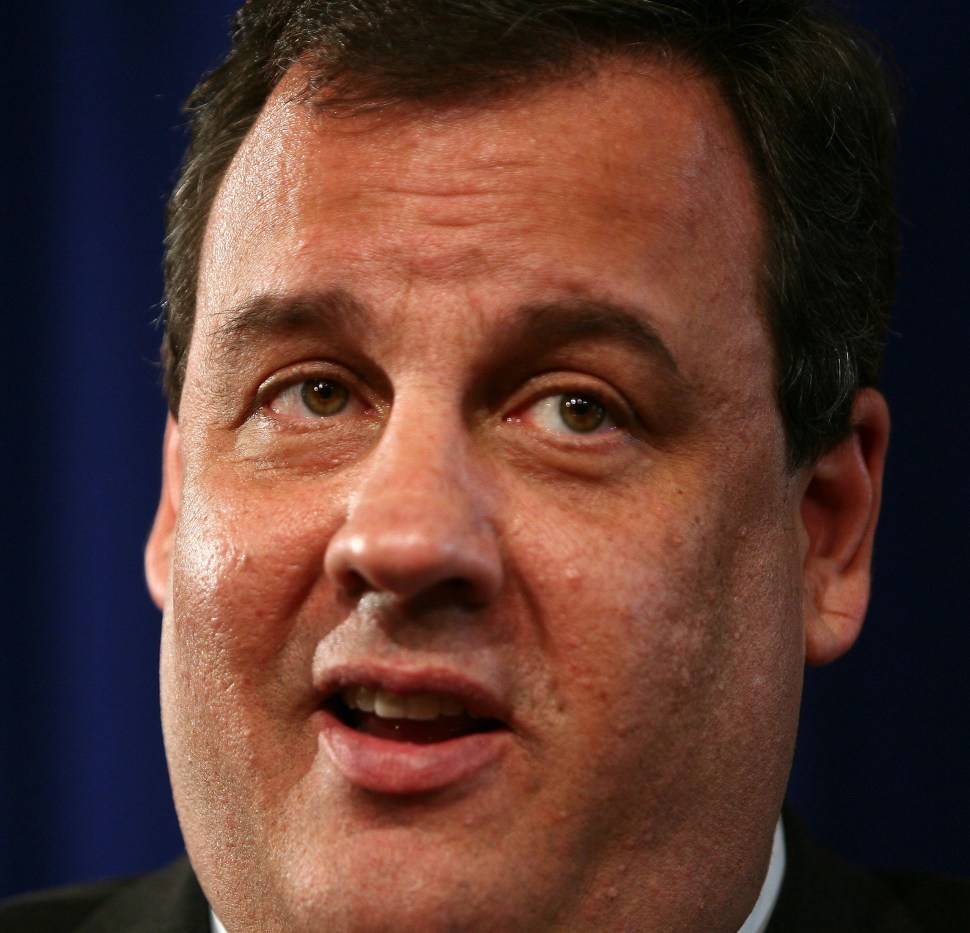 “I flew too far into the future: dread overcame me. And when I looked around, behold, time was my sole contemporary.” – Nietzsche

An insider gently laughed off PolitickerNJ’s Friday speculation that Gov. Chris Christie would abandon the governorship if Donald Trump picks him as his vice presidential choice. He loves the job too much, the source noted. He’d never give it up without having to be crow-barred off that outer office podium. Others scoffed at the very notion of Christie in that role, pointing to tanked numbers as kiss of death territory for Trump if he encumbers his ticket with the volatile New Jersey Governor.

Then there’s Christie as the combat-ready prosecutor, better suited than most for the role of dutifully teeth-gnashing German Shepherd.

Again, PolitickerNJ already made the case here that Christie’s budgeting decisions and eagerness to burnish Grover Norquist’s letter of support indicate that he could decide to abandon the governorship sooner than cave in to a compromise that would hike the gas tax without simultaneously offsetting the hike with a cut.

So what if indeed he does decide to leave office early to focus full-time on a vice presidential bid? What are the implications of his leaving right away or of leaving and how do they impact those individuals in the on-deck circle?

If Christie left office fewer than 60 days before the next scheduled election (or in other words anytime prior to September 9th) the state constitution requires a special election. Given the financial fiasco of Christie’s 2013 decision to schedule a special senate election on a separate day from the already scheduled gubernatorial election, it seems unlikely that Christie (or his successor LG Kim Guadagno) would set a date for the election on a day other than the already scheduled Nov. 8th presidential contest.

So if Christie were to leave prior to Sept. 9th, it’s likely that New Jersey would face a special election for governor on November 8th. The primary would obviously have to take place before that time. Getting back to 2013 for a moment; when Senator Frank Lautenberg died in June, Christie scheduled a special primary election in August, followed by the much criticized October special general election.

Having left the state Transportation Trust Fund (TTF) in midair, much like that other New Jersey born maestro of self promotion Norman Mailer did at the end of Harlot’s Ghost when after 1000 plus pages he closed the book with the galling lines “to be continued,” Christie would appear to have more to gain by leaving as soon as Trump selects him (again, that is of course if Trump selects him). That way, with his self styled story line of never having raised taxes intact, he can hand off the TTF debacle rather than have a legacy lassoed to what now appears to be no good outcome, as large numbers of lawmakers grumble about having to shave down the size of the gas tax hike as the only option.

Shaved down or shaved sideways, it’s still a tax hike without the accompanying sales tax reduction (and the projected billion dollar budget hole, which freaks out state lawmakers in particular).

Maybe heading into a general election Christie doesn’t see compromise on this front as such an awful thing, and we have underestimated his capacity to spin any outcome as a positive once the legislature revisits the Transportation Trust Fund (TTF) in mid July. If that’s the case, the burden of a new round of rotten egg pelting as a consequence of his out of state campaigning might persuade him this time to give up his job.

The Trump Campaign could, in fact, demand it of him, lest the howls of “do your job” grow dangerously distracting as Christie divides his time evenly between Ohio and Florida. But if the insider alluded to at the beginning of this piece is correct and Christie would not willingly go any time soon, he might wait it out and not resign until after early September, if only because the criticism of his travel becomes simply overbearing in a close general election contest. Of course, he could also leave early too if Trump picks him and they win, or if Trump doesn’t pick him, wins, and then sticks him in the cabinet.

But let’s assume for a moment that Trump picks him as his running mate and Christie decides to resign sooner rather than later, prior to the 60 day deadline of the next scheduled election.

Certainly LG Kim Guadagno would on the Republican side. She would run as the incumbent Acting Governor on a runway right now uncluttered by real Republican rivals.

The name of Assemblyman Jack Ciattarelli (R-16) is the only one among Republican elected officials in Trenton that continually surfaces as an alternative to Guadagno. Evesham Mayor Randy Brown also appears poised to run.

But the bottom line is that in a short time frame election, the primary contest would be Guadagno’s to lose.

On the Democratic side, presumably Senate President Steve Sweeney (D-3) and Jersey City Mayor Steven Fulop would have the most to gain from Christie’s declaration.

More than other candidate in either party, these two have played the game intently for the county party lines and appear, if backroom sources are accurate, to have the state divided between the two of them. Former Ambassador to Germany Phil Murphy stands poised to rush into the breach of people’s loyalties and affections but it would appear he will be able to do so only if either Sweeney or Fulop implodes.

Essex isn’t done, mind you (see below). But critically, the power brokers have positioned Senator Teresa Ruiz (D-29) for the senate presidency, and if Team Sweeney has not already promised Ruiz the position in return for the county line, those conversations would have to take place, especially if Sweeney senses Bergen’s Fulop-ward tilt.

If, too, Fulop pulls Bergen (and presumably Passaic) in exchange for backing Assemblyman Gary Schaer as speaker (current Speaker Vincent Prieto vaults to Congress in Fulopworld), one would have to believe the Jersey City mayor sees his own play to back Ruiz for senate prez in exchange for prying Joe D. away from Sweeney/Norcross.

The Smiths, Vitales, Sarlos, and Scutaris of the world will play for it, but given Essex’s impact on a Democratic Primary, Ruiz remains right now in the strongest position of anyone else to succeed Sweeney as senate prez.

For his part, the former U.S. Ambassador to Germany’s best shot for a line seems to be Middlesex, where local and district pols last week treated him to a hero’s welcome and happily gave a sleeves rolled-up Murphy their undivided attention at dinner time following his public remarks. Murphy has done a good job too of building pockets of support in Passaic, and in western Essex County.

State Senator Ray Lesniak (D-20) may keep Union County on lock down for his own gubernatorial run or bargain, but Sweeney, Murphy and Fulup all have electrical connections in Union. Like Lesniak, likely candidate Assemblyman John Wisniewski (D-19) wants to cohere the progressive wing of the party (Lesniak by championing liberal causes with legislation, Wiz with Bernieworld and Bridgegate love), but like Lesniak and Murphy, Wisniewski must confront the hard truth of appearing poorly positioned to secure significant county party lines: the very grease of Democratic Party Primary machinery.

Again, Sweeney and Fulop appear best positioned to benefit from an inside game if Christie fires the starting gun next month. So confident are those two sides of county to county support that it is safe to say today that among the Democrats, Sweeney and Fulop would have the most confidence of a 2016 as opposed to a 2017 contest, when a lengthened runway could create more obstacles, present implosion opportunities, or give the self funding Murphy greater room to maneuver and change the game.

One final consideration: If Hillary Clinton skims over the name of U.S. Senator Cory Booker for VP, the bosses who remain jittery over Sweeney’s North Jersey traction chances would probably attempt one last ferocious Booker buttonholing. But sources say that even if Clinton scorns him, Booker is having too much fun in the senate as a legitimated globetrotter to want to come back to don pitchfork and galoshes in a dirty river town beset by a billion dollar budget hole otherwise known as the capital city of New Jersey.