Mayor Bill de Blasio denounced some of the more extreme slogans of the Black Lives Matter movement in a radio conversation with an African-American NYPD officer today—even as he continued to praise the group as “necessary.”

Taking calls on his weekly “Ask the Mayor” segment on the Brian Lehrer Show on WNYC, the liberal de Blasio spoke with a black cop who gave his name as “Troy.” Troy praised Commissioner Bill Bratton, but complained that cops are increasingly afraid of lawsuits from civilians and are “refraining from doing any proactive policing,” to the detriment of the communities they serve.

But the officer seemed even more upset over some of the broadsides the anti-police brutality movement has deployed against the profession.

“The most important thing is the tone and the rhetoric that’s going on nationwide,” Troy said. “People are, are making assumptions and assertions, making racial accusations—I’m a black officer. And everyone who’s white and a police officer doesn’t equate to ‘racist.’ You know, people have marched along protest lines, calling me ‘a murderer’—they don’t even know me. I’ve never used my firearm. I mean, I’ve pulled it out, you know, but I’ve never used it against anyone. And I’m being called a murderer.”

“These things are inflammatory, and hurt the cause of which people are fighting for,” he continued.

De Blasio, who ran for mayor in 2013 as a fierce opponent of the NYPD’s controversial stop-and-frisk policy, defended his reforms by citing statistics showing a general decline in crime. But he acknowledged that protesters at Black Lives Matter demonstrations often say “vile and violent things” to the cops on duty patrolling them.

“I find it intolerable. I don’t understand it. If you’re trying to make social change, then talk about the changes we need in our society, in our laws, in our policies, in our leadership,” said the mayor, who has an African-American wife and children. “But why on earth would you direct that anger to an individual officer, particularly one who’s trying to protect you at that moment?”

“The Black Lives Matter movement, and what it stands for, is important for this country,” the mayor said. “The very phrase ‘black lives matter’ is an absolute and direct response to a broken history in this country of structural racism in this country. It is a necessary movement.”

De Blasio has had a complex relationship with Black Lives Matter. He aligned himself with the movement when it first emerged two years ago, but faced severe political backlash after an anti-cop assassin killed NYPD officers Wenjian Liu and Rafael Ramos that December.

He became a target of ire from many of the activists for calling on them to cancel planned protests in the wake of the two police deaths, and for his defense of Bratton, who pioneered so-called “broken windows” policing under former Mayor Rudolph Giuliani.

New York City boasts a majority-minority police force, even as it has struggled to recruit black officers. 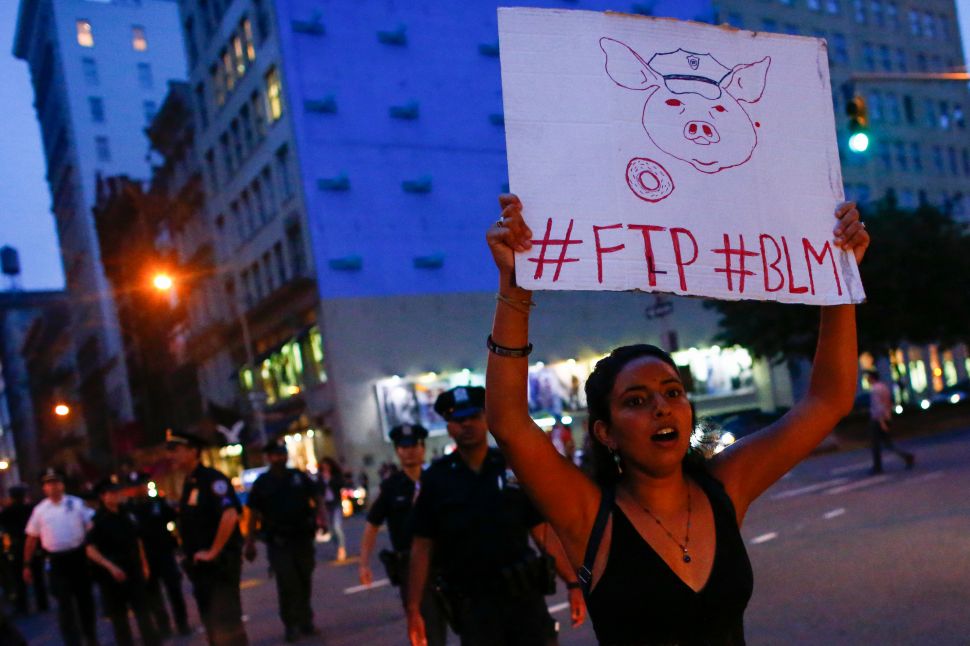