PHILADELPHIA—Mayor Bill de Blasio today sarcastically dismissed the latest turn in the investigation into the removal of a deed restriction at Rivington House—a local topic that worked its way into the national conversation this morning at a Politico breakfast in Philadelphia.

But back home in New York City, the story, focusing on damning documents the city sought to keep away from investigators, is getting big play—landing on the wood of both the Daily News and the New York Post, on a day when most front pages were devoted to Hillary Clinton’s nomination at the Democratic National Convention.

Mike Allen read the headlines to the mayor during this morning’s live-streamed Playbook Live event, which had been mostly focused on the convention.  “Such a pleasure,” de Blasio responded. “You always are bringing me good news.”

The story probably isn’t easy for a national audience to quickly digest—it’s complicated enough that even Room 9 reporters struggle to find a succinct way of explaining it to a local audience. The owners of Rivington House, an AIDS hospice, had been bound by a deed restriction to operate the facility as a nonprofit healthcare facility—but in exchange for $16 million, a figure based on its assessed value, got the city to lift that restriction. Shortly after, the property was sold to luxury condo developers at a profit of more than $70 million. In a scathing report this month, the Department of Investigation noted that the language used to lift the deed restriction was lifted word-for-word from a request from a lobbyist for the building’s prior owner, James Capalino—who also happens to be a fundraiser for the mayor.

The mayor has maintained the city was misled and told the property would be a for-profit healthcare facility (though it did not keep in place a deed restriction that would have ensured that).

But yesterday—after the administration finally agreed to released un-redacted documents to DOI under the threat of being taken to court—the Daily News reported that a memo from July 2014 outlined multiple uses for Rivington House, including condos,  and indicated that First Deputy Mayor Tony Shorris had been briefed on those options. The city had originally redacted that document in the material it turned over to DOI as “not relevant” to the Rivington investigation, leading to today’s headlines alleging a cover-up.

“This is so over-heated and so off-the mark,” de Blasio said today. “We’re very, very clear about the fact that everything we’ve done, we’ve put the public interest first.”

De Blasio had backed the the original decision of his corporation counsel, Zachary Carter, not to release certain documents or computers to DOI, saying the tension between the two agencies was typical. Asked about the shift today, he said he thought Carter was right in his originally assessment.

“They found a way to do more. That’s fine, but it’s all going to show the same thing in the end—that things were handled appropriately,” de Blasio said.

Well, not entirely appropriately—he went on to say there had been “mistakes in decision-making” that led to the deed removal.

“In terms of the flow of information and how we handled investigations, I’m perfectly comfortable,” de Blasio said. 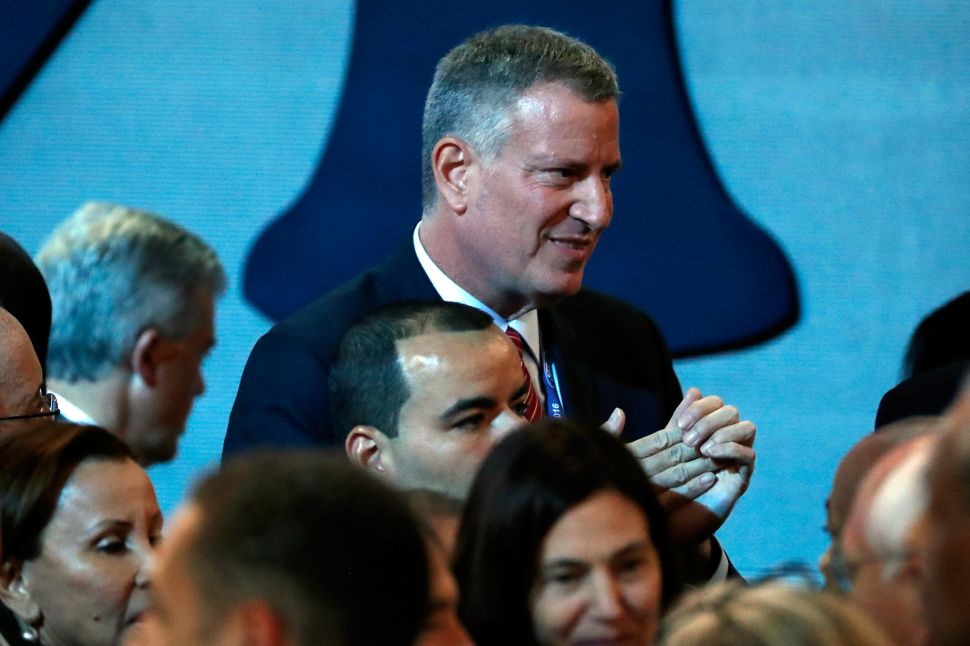