Drone racing gives players a sense of what it feels to fly like Superman. With a camera mounted on a drone and a Google Cardboard ready headset, a user can see from the drone’s perspective as it flies through a real space. It’s something drone enthusiasts have been playing around with for a while. In 2014, The Verge said that even flying around their office was exciting with a first person view.

As drone sports become more popular, they have become more organized, with groups like the Aerial Sports League popping up to provide structure to the nascent field, as the Observer previously reported. Like a lot of new tech activities, the early adopters have had to put in a lot of work, building their own drones, learning to fly and staying abreast of new tech as it comes out. Today, an affordable starter package for drone racers came out on Indiegogo.

Autonomous launched a campaign for a drone racing starter kit on Indiegogo today. The first 100 pre-orders could get the kit for $99, which was a pretty good deal, but it sold out in less than three hours. The price has gone up to $129.

A typical drone with a built-in camera starts at about $35 on Amazon. Google Cardboard ready mounts made from plastic start at about $15. So $100 is about right for two cameras and two headsets. Plus it comes with flags and poles for setting up a race course.

This campaign has some red flags. Neither the Indiegogo campaign nor the website give a lot of information about the drones’ specs (such as engine size, weight, range and radio frequency). It also doesn’t show the drones’ controllers anywhere in the materials, but in the product video and the photo above, actors can be seen using remote controls rather than mobile phones to control the vehicles. The remote controls come with the drones, right? Probably.

It’s also worth noting that one of the most dramatic crowdfunding failures in history happened on a drone project, the Zano. 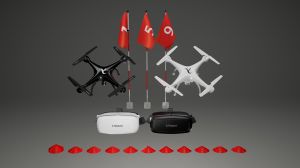 On the Autonomous website, it says, “Be in the pilot seat and experience the thrill of flying in 3D.” But it looks like there is only one camera on each drone, so it can’t be 3D. It’s also a long way from the 360 degree view one would get with a drone equipped for virtual reality. An Autonomous spokesperson did not respond to a request for clarification.

Still, strapping a viewscreen to your face and seeing straight through the one camera on a drone would make for a solidly immersive experience, anyway (it’s just not virtual reality or even 3D). So much so, in fact, that a French organization called L’Adapt launched a program there called Handidrone, where people living with immobilization can experience a sense of flight by piloting quadcopters equipped with cameras. It’s much the same experience as what Autonomous put on sale today.

If nothing else, today’s Indiegogo launch shows that getting into drone racing has become relatively affordable to normal people. Flyers that want to be truly competitive will eventually need to build their own, but these units might be a good way to get those first hundred crashes out of the way as new enthusiasts learn to fly.