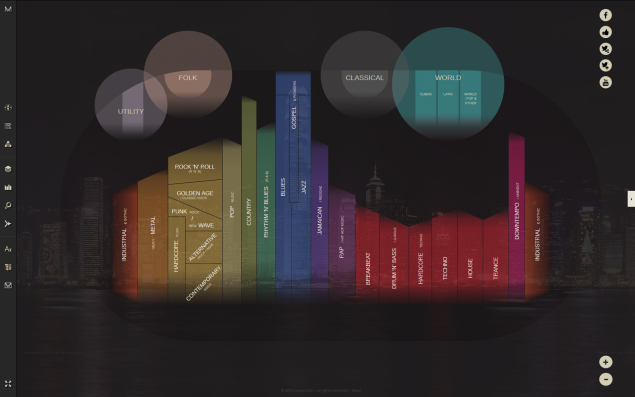 Belgian architect Kwinten Crauwels, 32, has created a new website called Musicmap, which he hopes will become the web’s next great music source.

After eight years of research and development, Crauwels launched the first version of the site, which maps an extensive and interactive “Genealogy and History of Popular Music Genres,” on June 1. In its current state, Musicmap is at its core an immersive music encyclopedia — and a Sociologist’s dream.

Always a music lover, but never a musician, Crauwels began building Musicmap as a hobby. He wanted to create something significant pertaining to music, without actually making music itself.

“The process was very gradual,” Crauwels told the Observer. “I didn’t know where I was going to end in the beginning. It wasn’t even a website at first. The main goal was to create the view itself, the visual image, the map.”

After Crauwels figured out a direction for the project, it turned into a pseudo-second job over the last two to three years—Crauwels’ day job is at a Belgian architecture firm.

“If it could have been done in a team, people would have done it a long time ago.”—Kwinten Crauwels

Frustrated that he couldn’t find a pre-existing website that offered a concise and comprehensive mapping of music history, he decided to make his own.“People have been looking for this kind of website for a very long time,” Crauwels said. “I spend almost a year looking for a website for this, but I never found it. And it was very frustrating, so I wanted to try it myself.”

He attributes his success to the fact that he completed all of the research on his own. “If it could have been done in a team, people would have done it a long time ago,” he explained. “Google tried it with the music timeline and other music companies have tried it, but it really, really seemed impossible.”

But with the help of his brother Dries, a 26-year old web developer, the site came to fruition.

Upon entering the site, visitors are confronted with a colorful graphic. Four larger umbrella genres—Utility, Folk, Classical and World—hover above the graphic, resembling planets. The entire design sits above a photograph of a skyline—a nod to Crauwels’ architectural background.

Within each of the subgenres, visitors will find concise historical overviews, situating each smaller category within its broader musical context, as well as a brief playlist of tunes that Crauwels determined to be most indicative of that category.

Margaret Rhodes at Wired, intrigued by the site’s impressive organization of 146 years worth of music, likened the home page to the Emerald City.

The “buildings” are color-coded and mapped into clickable sections, each of which pertain to a distinct genre of music. Clicking on each of these will reveal subgenres—for instance, clicking on the “Jazz” block will lead to a list of categories ranging from “New Orleans Jazz & Dixieland Jazz” to “Free Jazz/Avant-Garde” to “Nordic Jazz.” 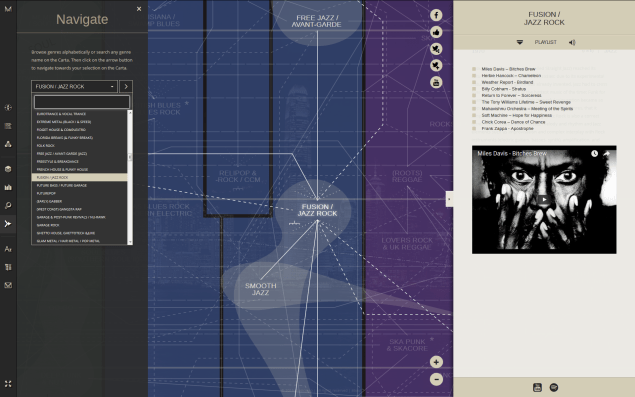 A screenshot from the site. Photo: © 2016 musicmap

Within each of the subgenres, visitors will find concise historical overviews, situating each smaller category within its broader musical context, as well as a brief playlist of tunes that Crauwels determined to be most indicative of that category.

Zooming in on the home page reveals the “genealogy” as Crauwels puts it, mapped out in white solid and dotted lines. A key on the left hand side of the screen explains his methodology behind the connections.

Other features include a glossary that includes a slew of musical terms and a search tool which will direct users to any keyword, musical artist, genre or genre synonym, subgenre or song within the map. For instance, type in ‘The Strokes” and you’ll find their song “Juicebox” on a playlist with songs by bands like The Arctic Monkeys and The Black Keys that fall into Crauwels’ category “Garage Rock & Post-Punk Revivals/ Nu Rawk.” 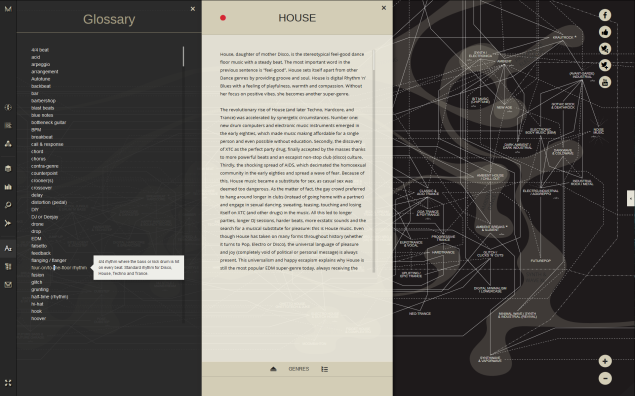 While the playlists currently link to YouTube songs which can be played directly on the page, rather than in a new tab, Crauwels plans on syncing the site with Spotify to facilitate listening. He also plans on altering the site to include its own database, so that users can navigate an even wider network of music.

“There is still a lot of room for improvement there,” he said. “It’s a lot of work picking 2,500 songs, but in time we’re hoping that these playlists will get expanded or even automatically added.”

Crauwels called the site a Google Maps of music genres: “It’s a very fast and quick way for people to learn genres …  we have a really quick way of just exploring,” he said.

While in the short term Musicmap will undergo minor renovations, in the long run Crauwel’s brainchild will go through more extensive structural changes.

Crauwels said he wants to match more advanced music websites like Spotify. “That’s what we’re aiming for, to complement [those platforms] in the long term,” he said. “We’re redeveloping the whole website from scratch now, in order to make it more powerful and to implement new more powerful features.”

While in the short term Musicmap will undergo minor renovations, in the long run Crauwels’ brainchild will go through more extensive structural changes.

“It’s still very experimental, and too early to tell which direction exactly it will go,” Crauwels said. “Let’s just say that we’re redoing the entire code in order to go next-level.”

At the end of the day, Crauwels says he’s mainly interested in producing something rooted in music education.