After months of investigation and speculation, this week the Federal Bureau of Investigation announced its findings regarding Hillary Clinton’s misuse of email during her tenure as Secretary of State. To the surprise of nobody who has watched the Obama Administration operate with open eyes, the FBI is not recommending the prosecution of Clinton in EmailGate.

In his July 5 official statement, Director James Comey detailed how the FBI investigated this matter and concluded that Clinton’s personal, private email indeed contained quite a bit of classified information. It’s a singularly strange statement, since the FBI is not seeking prosecution for the crimes detailed by Comey. Neither did he spare the State Department and its notoriously slipshod security. As the director stated:

“While not the focus of our investigation, we also developed evidence that the security culture of the State Department in general—and with respect to use of unclassified email systems in particular—was generally lacking in the kind of care for classified information found elsewhere in the government.”

It bears noting that a previous investigation 16 years ago came to identical conclusions about the State Department. Security matters at Foggy Bottom were so slipshod that then-Secretary Madeline Albright was moved to denounce her own department in blunt language we have never heard from Clinton: “I don’t care how skilled you are as a diplomat, how brilliant you may be at meetings, or how creative you are as an administrator—if you are not professional about security, you are a failure.”

Given how bad things remain at State more than decade-and-a-half later, with basic security rules being tossed aside from the very top of the department, it seems worth asking whether American diplomacy can be reformed at all. News that the State Department is relaunching its own investigation of Clinton’s email activities does not inspire confidence, since this look—like all previous ones at State—will end up on the desk of Patrick Kennedy, the undersecretary of State for management, the notorious “M,” a longstanding Clinton protégé who ran interference for Hillary from the start.

Regardless, Director Comey’s statement gets Hillary Clinton off any prosecutorial hook for her documented violations of security rules and regulations. As this column has established, Clinton’s “unclassified” emails in fact included a great deal of highly classified information such as Top Secret-plus Special Access Programs from both CIA and NSA. It’s now clear that she will walk on these grave security violations by her and her top staff.

Although Comey stated that security violations of the sort perpetrated by Secretary Clinton were something “no reasonable prosecutor” would take to court, his own FBI prosecuted a Navy reservist just last year for less serious infractions. Bryan Nishimura placed classified information on his personal information system during a deployment to Afghanistan, receiving a sentence of two years’ probation, a $7,500 fine, and a lifetime ban on holding any security clearances, per his plea agreement. In other words, Nishimura did exactly what Hillary Clinton did, albeit on a smaller scale.

Clinton faces no danger of a similar fate, though some have noted that Director Comey’s statement omitted matters of political corruption relating to EmailGate, which are also under FBI investigation. However, it takes a high degree of optimism to think Comey possesses the courage needed to take on the Clinton machine in this election year.

It’s impossible to imagine Hoover concluding that Clinton broke the law but there’s nothing to be done about it.

None of this means EmailGate is dead as a political matter. Indeed, the FBI’s punting on this case has inflamed passions on the Right. Comey was subjected to withering questions when he appeared before a House committee this week to discuss Clinton’s emails. Paul Ryan, the Speaker of the House, who previously made few comments on EmailGate, moved to request that the Intelligence Community deny Clinton customary intelligence briefings as a presidential candidate, based on her proven track record of mishandling classified information. Thus, EmailGate will remain a hot-button campaign issue, a festering sore for Team Clinton.

On cue, Hillary has pushed back in Clintonian fashion, yet again denying that any of her emails contained anything “marked” classified—just days after Director Comey stated the opposite. This column established that fact as well, beyond any possible doubt, but truths that do not corroborate the official Clinton narrative are now deemed lies by the Democratic faithful.

The only potential show-stopper now for the Democratic frontrunner and imminent presidential nominee is the distressing question of which foreign intelligence agencies possess Clinton’s emails. I’ve been telling you for months that several spy services are all but certain to possess them—above all Russia’s—and now the mainstream media is beginning to come around to this obvious reality.

All the same, no matter what the Kremlin may or may not do, the real loser in EmailGate is the FBI, whose professional reputation has been indelibly tarnished by its handling of this sordid affair. This is no small matter for our country. The FBI is not only the world’s most famous law enforcement agency, it’s also America’s secret police force—with all the power that implies. Malfeasance by the FBI, its bending to political winds, is a matter that should concern all Americans, regardless of their politics.

It’s abundantly clear that whatever enthusiasm existed inside the Bureau to seek Clinton’s prosecution evaporated once it became obvious that the White House would not support the FBI in EmailGate. The recent meeting between Attorney General Loretta Lynch and President Bill Clinton was an undisguised signal that, if she looked the other way, Lynch could continue as the nation’s top law enforcement official in January under Clinton. This is the stuff of banana republics, not law-based democracies. President Obama famously promised to “fundamentally transform” our country, and none can deny that he has delivered.

Let it be said that every FBI agent who investigated EmailGate understood that he or she would be fired and prosecuted for doing any of the shady IT antics Clinton and her Foggy Bottom staff did every day. In the end, it made no difference.

Blame for bungling EmailGate, for punting on recommending prosecution of established crimes by Hillary Clinton and her top staff, ultimately must fall on Director Comey. To make a controversial comparison, he is no J. Edgar Hoover—and that’s the problem.

Hoover was appointed director of the then-Bureau of Investigation in 1924 at the tender age of 29 (it was renamed the FBI in 1935) and stayed there until 1972, through eight presidents. President Richard M. Nixon wanted to cashier the elderly Hoover but, like all his predecessors, never found the courage—so the FBI director died in office, taking his secrets with him to the grave.

There is much to dislike about J. Edgar Hoover. His obsession with the Bureau—his Bureau—led him to destroy the careers of countless G-Men he deemed unfit, sometimes on a whim. His attention to the smallest details, even of what neckties FBI agents could wear, seems comical now but inspired fear for decades inside the Bureau.

Hoover possessed the casual racism possessed by white Southerners born at the end of the 19th century. His dislike of Martin Luther King, whom he wrongly believed to be controlled by Communists, can be attributed to his distaste for the Reverend’s wild sexual antics—well known to the FBI, which were at odds with his saintly public image.

In truth, the FBI director collected compromising information about many top politicians, which appears incongruous, given the puritanical Hoover’s own rather strange personal life. Scandalous stories of Hoover in a dress are KGB disinformation, but it’s clear that, whatever may (or may not) have been happening in anyone’s bedroom, the director was in a long-term relationship with Clyde Tolson, his deputy and closest confidant. Revealingly, Tolson was the only person, other than his beloved mother, allowed to call Hoover by his given name, John.

To sum up, John Hoover was an odd man. He was also a scrupulously honest one who demanded total integrity from his Bureau—and he got it. Hoover’s agents had to be above reproach. The FBI, which is really several dozen field offices that function as semi-independent fiefdoms, is notoriously difficult to run. Arguably nobody has really been able to do so effectively since Hoover’s death.

Here his annoying attention to detail was a big help. It’s difficult to imagine many of the scandals that have beset the FBI over the last four decades happening on Hoover’s watch, while gross debacles such as the Whitey Bulger case, where Boston’s top mobster played the local FBI office for decades thanks to deep corruption, would have been unthinkable in the Hoover era. In a democracy, there’s much to be said for having a secret police chief who’s a micromanagerial jerk.

Even the things his enemies most loathed about Hoover turn out to reflect better on him than most Americans realize. Nothing gets the Left in a lather about Hoover more than his 1960s domestic counterintelligence program, the notorious COINTELPRO, which was employed against dissidents, activists and terrorists from the Weather Underground to the Black Panthers. To this day, COINTELPRO is castigated as illegitimate and undemocratic by left-of-center commentators.

However, the Left doesn’t seem to mind that COINTELPRO was incredibly successful at breaking the back of the Ku Klux Klan. By the early 1970s, thanks to aggressive FBI operations, including ample dirty tricks, the KKK was a spent force, its ranks filled with informers—all due to Hoover. Inconveniently for the Left, the FBI initiated COINTELPRO against the Klan, a secret program it termed WHITE HATE, in 1964—three years before it started its BLACK HATE program that targeted the Black Panthers and related groups.

Hoover’s legacy is nothing if not complex. However, it’s abundantly clear that, were he still heading up the Bureau, he would not have been afraid of taking on the White House if he felt a matter warranted it. After all, he did so many times as the country’s secret police chief. It’s impossible to imagine Hoover concluding that Hillary Clinton broke the law but there’s nothing to be done about it.

Perhaps it’s not a bad idea to have a detail-obsessed FBI director who inspires fear—or at least respect—in our elected leadership. The collapse of the EmailGate investigation, which seems likely to maintain a slow-rolling political crisis, demonstrates that Barack Obama and Hillary Clinton don’t fear James Comey and his FBI one bit, and that’s part of the problem. 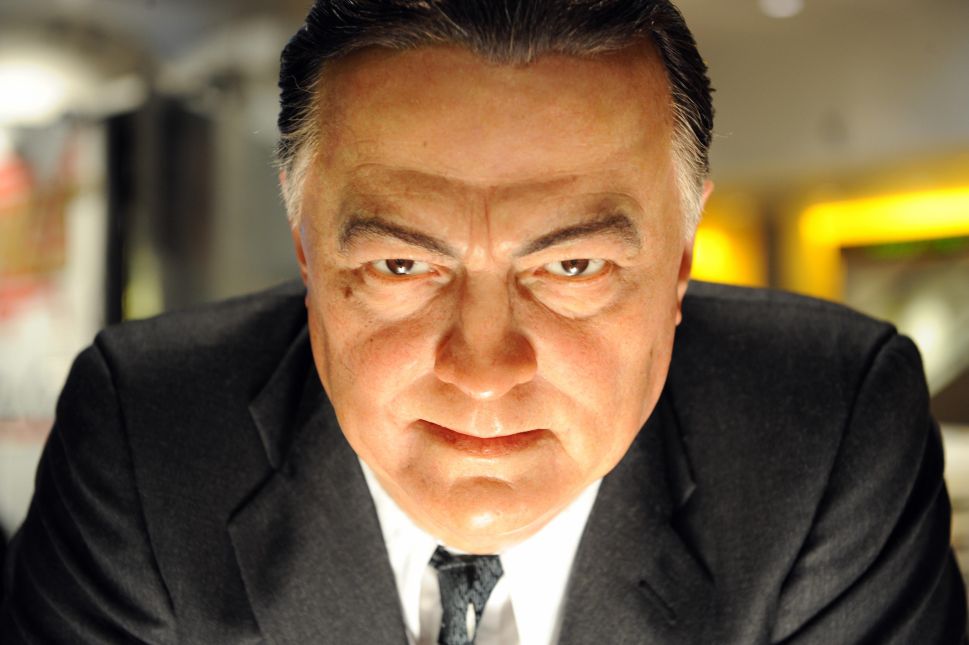