There’s normally some fresh reporting infused into my columns, but alas, Kanye coming out from under his troll bridge brandishing his troll club to troll someone isn’t news anymore. Way back in February I wrote about how we’d all just be a lot better off if we ignored the guy, going so far as to suggest the common remedy for a bully—ignore him and he’ll go away. How wrong I was.

You can go through the headlines and see what’s transpired over the last five months with Kanye, his continued success in inserting himself back into the news cycle, but I won’t list them here. Every added mention of his name brings on the likelihood of a summoning, prompting a rip in the spacetime fabric between us and the damned; it’s similar to saying “Beetlejuice!” over and over.

So my apologies for putting i Kanye’s energy into our normally deep discussions. But the other blogonistas really need to chill and stop edifying this guy every time he wants attention.

After Kanye’s epic troll of a music video where eerie wax figures of celebrities were all depicted naked in bed together, even the Ye-ssiah himself couldn’t deny he was trolling. “Can somebody sue me already? #I’llWait,” he tweeted in the days following the video’s release. Pitchfork reported it first, further inching toward a gossip-column level of integrity. The headline: “Kanye Awaits ‘Famous’ Aftermath.”

Of course, the video was for “Famous”, which included the choicest trolling one-liner on an album full of trolling one-liners—”For all my Southside niggas that know me best/I feel like me and Taylor might still have sex/Why? I made that bitch famous.”

You don’t have to research the aftermath of that song’s premiere at a gregarious MSG fashion show to know that Taylor Swift was offended, and that this was Kanye’s aim all along. He said that they talked about it; Taylor said they didn’t. Last week, Kim Kardashian shared a video of Kanye in the studio, talking on the phone with Swift and hearing her express support for most of the lyrics. As she called Kim’s sharing of the clip “character assassination” and claimed Kanye never ran the word “bitch” by her, the news cycle went on and on and on to the point of existential nausea.

Yes, it’s totally fucking illegal to record someone without their consent in California. Swift apparently threatened Kanye with legal action months ago, soon after the song’s premiere, reminding him that sharing a recording without her consent is a felony. Did Kanye and Kim forget, are they just that tacky, or is this all an elaborate, artistic orchestration?

Either way, don’t you kind of feel bad for Taylor Swift?

That’s a problem for me because frankly, I resent Taylor Swift. I don’t much care for her music (not trying to start a thing here if you do); what really aggravates my bowels is the astronomical history of nepotism and entitlement, undercutting the whole “hard work and independence” narrative that defines her persona.

This New Yorker profile from 2011 really carves away at some of the upper crust, featuring a comment by Swift on the importance that designer handbags played in her upbringing and reporting that her stockbroker father comes from a family of bank presidents. A true underdog story.

And that, for me, makes her music inauthentic and plasticine, no matter how many little kids Taylor wants to help dream.

She’s singing from a carefree, liberated place of privilege and opportunity, then dangling the lifestyle in front of us regular folk and teasing us with a level of unattainable grandeur. Hence, she’s also insincere. Maybe Kanye’s trolling seeks to address that, a reclamation of spectacle from the 1 percent milquetoast gentry who’ve screen-printed their own faces all over cheap crap at merch stands across the arena and are best paired with a side of lukewarm $20 chicken fingers.

Were this his intent, I’d surrender. Kanye’s need to premiere everything he makes in some vast fucking spectacle would make sense. Kanye as an undercover Situationalist, just pranking all of us with a massive farce played out as a large performance piece, a social sculpture designed to hold up a mirror.

That’s what the bloganistas want you to think, but I call bullshit.

What’s worse is I worry that by even mentioning an obscure creative sociopolitical movement, Ye gets woke to the potential subversive power of his work, only further feeding his bizarre, chauvinistic, “on the spectrum” narcissism. What’s to stop him from appropriating the Situationalists and putting them on T-shirts, next to airbrushed images of Robert Kardashian and his dead mom?

When is his appropriating an act of defiance, and when is it an act of hypocrisy? What would Nina Simone say? He’s become everything he’s ever Ye-ted.

So fuck Kanye for causing me to sympathize with Taylor Swift. I like tons of pop music. I don’t have a problem with spectacle, either. But with such a stage, such a platform and such privilege, the music coming out of it doesn’t have to be so empty, nor the spectacle so hollow.

Justin Joffe is on Twitter, and believes you are entitled to your outrage. 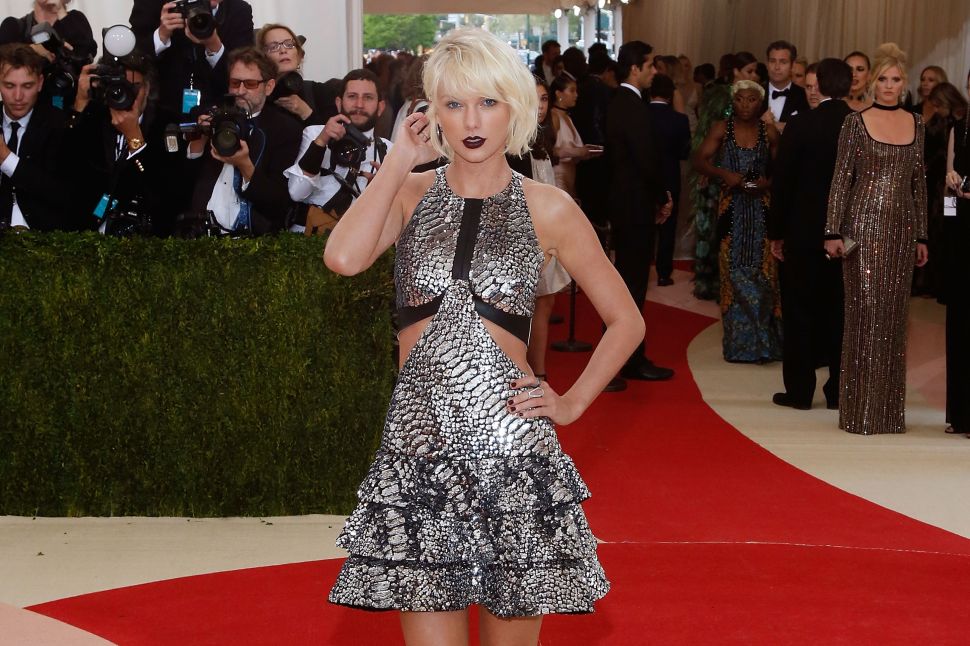