Khloe, Kourtney, and their BFF Malika recap the trip to Vail (Wait, that’s my job!) and reminisce about Rob and Blac Chyna because what else is on any of our minds at any given moment? Nothing. Malika helps Khloe come to the realization that Chyna will soon be a part of the family and Khloe says, “stranger things have happened, my stepdad turned into a girl.” Nothing’s more American than some lowkey transphobia!

Rob wants to meet up to resolve things once they return to America’s deadbasket, the heart of the nation, Calabasas. Nothing productive happens in Colorado.

Kylie got another dog and I’m honestly ready to call pet child services. Her snapchats of those dogs running around with pee pads all over the apartment are truly disturbing. The good news is, her lip kit is restocking! Blessed be! I am now the owner of both Candy K and Kourt K so I know how vital these are. Kylie didn’t ask what her country could do for her, she asked what she could do for her country, and she did not disappoint.

The tragedy is, sometimes Kylie’s site gets overloaded and crashes! And then people don’t like it. And that makes her sad. To add insult to injury, Kris considers cancelling her “business trip” to Dubai (Is she an oil tycoon? What’s happening?) because of everything going on with Rob. But the girls assure her that they can handle it because she has important business to conduct!

Break out your tissues, because at lunch Kris reveals to Kylie that she was once booed at an appearance. Kylie wonders if lip kits are even worth such potential trauma, but she decides to soldier on a push through. An American hero.

Finally, Rob meets up with Khloe to make peace, much like Woodrow Wilson at the Treaty of Versailles. Just remember, appeasement doesn’t work! The fighting ensues pretty quickly, much like the floor of the Constitutional Convention. Sit down, Rob! The rest of the sisters show up and things cool down and Rob apologizes for not telling them about the engagement.

Just when things seem hunky dory, Rob reveals that there’s one last thing he needs to share. This is why you don’t negotiate with terrorists. Kim jokingly guesses that Blac Chyna is pregnant and it turns out she’s right! The postwar baby boom is real.

The sisters are in shock, so naturally they take to the gym. After the important healing process of cardio and a cool down, Kim and Kourtney call Kris and tell her that everything is good with Rob now (It is?).

Kris and Corey seem to be conducting tons of business exploring Dubai, by which I mean it seems like he’s giving her the business. She deserves it! Overall, Kris is happy to have another grandchild and that her son is happy. Can you believe she’s a grandma?! Wow. Another American hero.

“I just know I am not supposed to be famous,” remarks Kylie Jenner. And yet she still has the strength to release a video game based on her fame. So brave.

Kylie gets so nervous before her lip kit release. Terror strikes. The server goes down. But like true Americans, they solve the problem instead of whining and asking for handouts. And the lip kits sell out. We are a resilient nation.

Now that Kylie has made it past the worst imaginable, it’s no big deal for her to post a picture on Instagram of her hanging out with Blac Chyna, despite Khloe’s rage. Kylie explains that Rob is happy and she and Chyna are now friends. Because, like I said, Kylie is a true American hero. With that, Kris, another hero, issues an executive order to put the Rob drama behind them. And because of the sacrifice these women made for us, we were given tons of photobooth pictures of Blac Chyna at Khloe’s birthday party last week. God Bless the U.S.A. 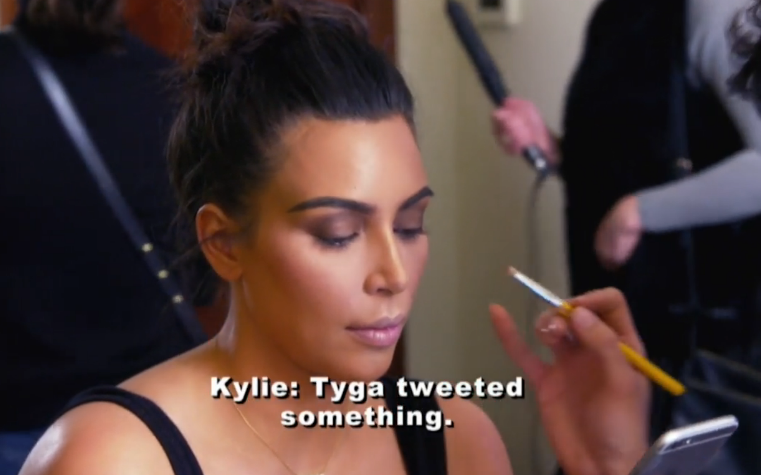