While the chaos of Taylor Swift and Kim Kardashian’s epic feud swirls on (quick, choose a side), Scottish D.J. Calvin Harris (née Adam Richard Wiles) has quietly leaked a new relationship to Page Six. As the social media battle rages on, Harris is keeping a surprisingly low-profile, especially after going on a Twitter rampage against his ex-girlfriend and enraging the Swifties, which is a dangerous game.

Everyone from Chloe Moretz to Ruby Rose has weighed in on the girl fight, with Harris remaining surprisingly silent. Instead, he’s taking the high road–by disclosing his brand new relationship with R&B singer Tinashe, who is poised for pop superstardom and has been for quite a while. If you, too, have been publicly feuding with your former significant other, whether online or in real life, follow Harris’s lead and approach announcing your new relationship in a similar way.

Like Harris, there’s no need to announce to your ex that you’ve moved on. Instead, pretend to be the wronged party before having a close personal friend break the news, either over social media or in person. The secret is in the subtweet. Of course, it helps that Calvin Harris and Tinashe collaborated in the past, so they’re already workplace pals who have been spotted on Instagram together. If you don’t have a public relations expert at your disposal, tell your most gossipy friend and wait for her to make an uneasy Facebook status about it.

Send out a flurry of subtweets in advance of the announcement.

Your announcement won’t be quite as intense if you haven’t spent months rebuking your ex for their treatment of you. Harris has been low-key attacking Swift for months now, which is readying his fans for a new relationship. And who better to team up with than a woman who has collaborated with Chris Brown and R. Kelly in the past? She’s used to bad men, so if Harris ends up seeking revenge she won’t be surprised.

After Harris called Swift out on Twitter (everyone’s favorite platform for pettiness) for attempting to destroy Katy Perry’s career, and Kim Kardashian leaked her phone call with Kanye West, even Swift’s girl squad might begin to doubt their idol. Unfortunately, a seasonal party with only her current boyfriend would be less than Instagram worthy. It’s a helpful reminder to keep your pals around, especially when you’re preparing to make a major announcement.

There’s no reason to wait an acceptable amount of time before becoming Facebook official with your new suitor. Simply begin incessantly tagging photos of them on all social media platforms. Make sure to create a couple’s name and hashtag it. While Harris and Tinashe don’t have a hashtag yet, it’s only a matter of time. May we suggest Hash?

Force your new significant other to wear an outfit with your name on it.

While Tinashe is a bit too chic (she attended the CFDA Awards with Alexander Wang) to rock an “I heart Calvin Harris” t-shirt, there are plenty of other fashion forward options. Tinashe should consider this “We found love in a hopeless place” bracelet as a nod to his duet with Rihanna, or perhaps this inspirational wall decal with his name (literally) on it. Nothing says, “We definitely signed an NDA” quite like a shirt with your new romantic partner’s name on it. 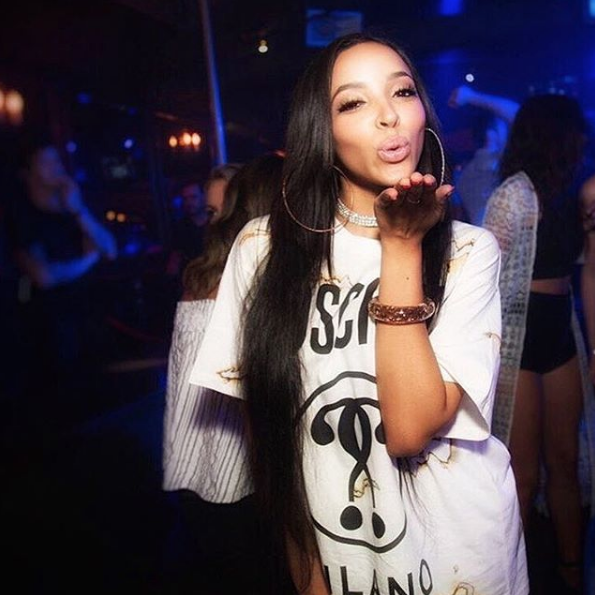