City Council Speaker Melissa Mark-Viverito maintains she has been “transparent and responsible” to her colleagues after she announced that a package of police reform bills known as the Right to Know Act would be instead be handled by the NYPD—insisting that she wanted hear colleagues to hear it from her first.

In a meeting with Council members last Thursday, the speaker told her colleagues that the long-stalled act—which would require the city’s police officers to identify themselves when stopping an individual and to let that person know that they have the right to refuse a search if the officer does not have probable cause—would not go before the Council but rather would be handled internally by the police department, despite having a sufficient number of sponsors to pass.

She stressed that she wanted to inform her fellow Council members in a closed-door meeting last week so that they do not discover it in the press.

“I thought it was important that instead of my members hearing about that conversation in the media that I had a responsibility to have the conversation within the Democratic conference and let them know about the conversation with the advocates,” Mark-Viverito said at an unrelated press conference where the Mayor Bill de Blasio signed into law three bills increasing access to feminine hygiene products. “If members chose to engage the media and share private conversations, it forced a situation where I had to uncover what it was that we were engaged in.”

In May, the Young Women’s Initiative Mark-Viverito created recommended adopting the act’s proposed policies despite the fact that she had not yet taken a position on the act. But even then it’s main sponsor was skeptical the bill would get anywhere. It did not go to the floor for a vote despite its high number of sponsors—and despite promises that rules reform would make the council more democratic under Mark-Viverito than it was for the months former Speaker Christine Quinn stalled votes on earlier police reform bills.

The act has been deadlocked since the Council held hearings on them. Other factors that contributed to the impasse over the bill included the mayor’s reservations about the act and Police Commissioner Bill Bratton’s vocal opposition to it.

Mark-Viverito said she is receptive to the concerns of protesters but noted that the NYPD is supportive of proposed changes, including changes to training.

“We’re at a point now where yes, I understand there’s disappointment,” she said. “I understand that there are people protesting on the steps. I hear them. We clearly said that legislation is not off the table, it was not closed to legislation. There’s a partnership and a willingness of the NYPD to start embracing these changes right now.”

When the mayor was public advocate, he insisted that the anti stop-and-frisk Community Safety Act deserved a vote before the Council regardless of the position of Quinn. But he argued that was a different situation.

He noted that then Mayor Michael Bloomberg and then Police Commissioner Ray Kelly were unreceptive to various reforms.

“The then current mayor was resisting and the current police commissioner at the time, they were resisting any number of changes…they resisted changes in stop-and-frisk,” de Blasio said. 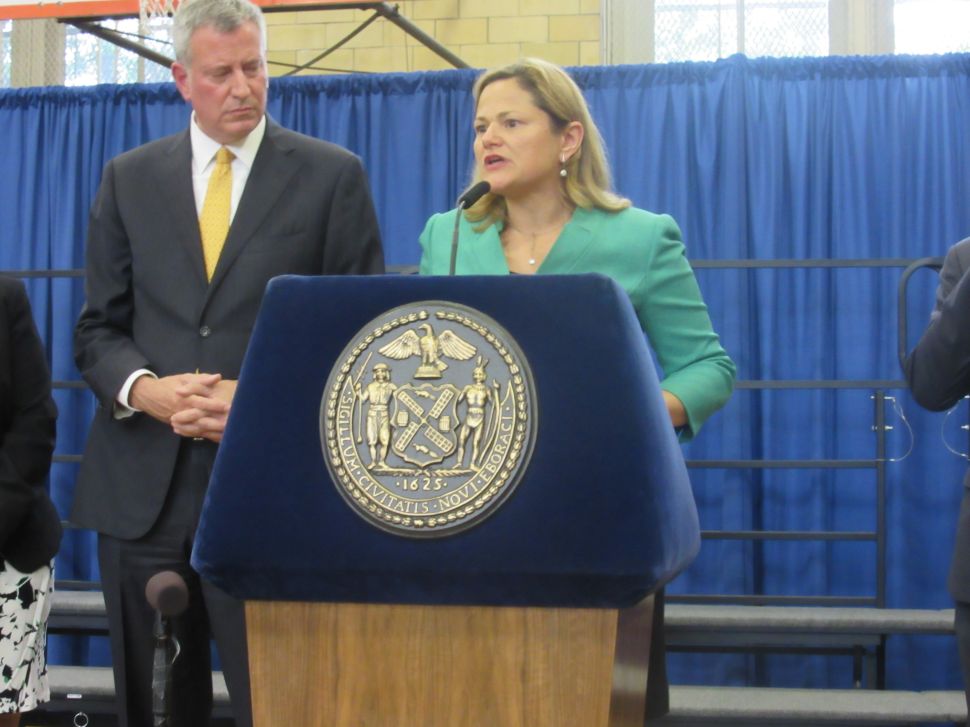