Mayor Bill de Blasio condemned the “senseless acts of violence around the world,” praised Muslim police officers and touted his administration’s achievement of securing two Eid school holidays at a prayer marking the end of Ramadan early this morning.

Speaking before several hundred Muslims at Bensonhurst Park in Brooklyn, the mayor said he was “saddened” by “senseless acts of violence around the world,” including a recent suicide bombing in the Muslim holy city of Medina in Saudi Arabia, and encouraged New Yorkers to stand together and unite in peace.

“We believe in tolerance and respect for all,” he said. “And even though we’ve gone through adversity in this city, even though we ourselves have experienced terror, we have come back in a spirit of unity, and that makes us strong.”

The mayor’s appearance at this year’s prayer marking the end of Ramadan, when Muslims fast from sunrise to sundown for a month, is noteworthy following his announcement alongside City Schools Chancellor Carmen Fariña in March 2015 that two Muslim Eid holidays—Eid al-Fitr and Eid al-Adha—would become school holidays in 2016. De Blasio pledged to do so when he was running for office in 2013.

The mayor also noted that his administration has welcomed Muslim leaders to its Clergy Advisory Committee and praised the members of the Muslim Society of the NYPD.

“We celebrate every day the Muslims who do so much to help us all and to make the city better, including the 900 members of the Muslim Society of the NYPD who protect us all,” he continued. “We say thank you to them.”

Chirlane McCray, the mayor’s wife, was also present at the prayer and wore a hijab—something that stood out to Zein Rimawi, vice president of the Arab Muslim American Federation.

“What was special about it was that they came and the first lady was here,” Rimawi said. “It was the first time since I came to this country that the first lady came to an event like this, came wearing a hijab, which is a very, very good sign at a time where everybody is talking against the hijab.”

Raja Abdulhaq, secretary of the Arab Muslim American Federation, which organized the prayer, praised the mayor for his long-standing commitment to reaching out to the Muslim community.

“Mayor de Blasio spoke here before he became the mayor,” he said. 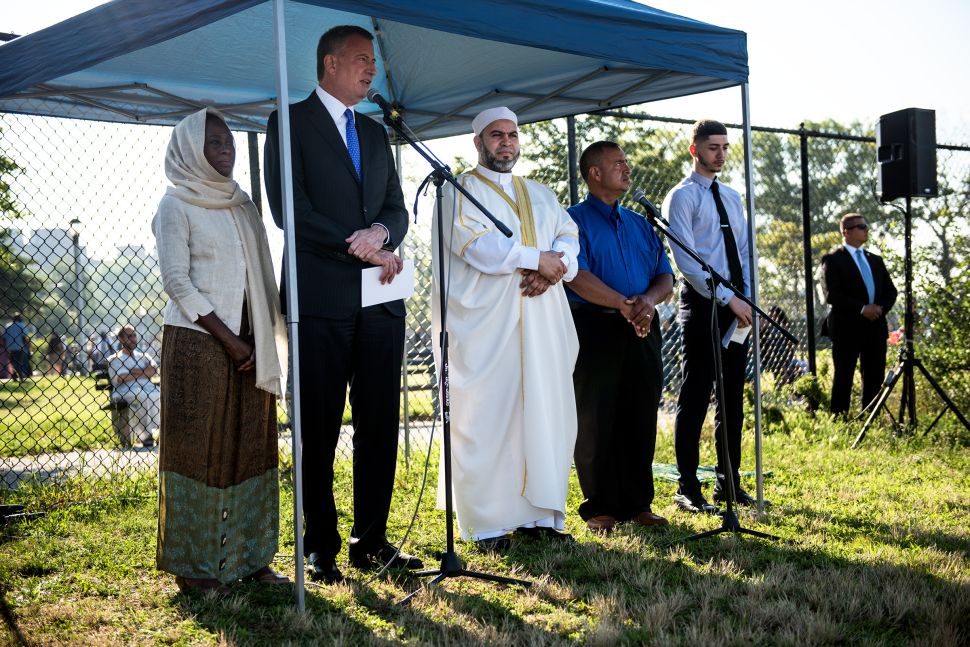