I knew Mike Birbiglia’s voice before I knew his name. He was a stranger who spoke like a best friend in the many stories he’s told on NPR’s This American Life, a man with a gift for crafting stories and a gift for telling them just right. He’s the renaissance man of mumblecore comedy performers, who’s written and performed over half a dozen comedy albums, a one-man off-Broadway show, and a film, Sleepwalk With Me.

Now he’s written and directed his second film, Don’t Think Twice, currently scored at 100% positive reviews on aggregator site Rotten Tomatoes. This introduction could have easily been a love letter to the standup specials I’ve watched on repeat (my junior year of college, I memorized “My Girlfriend’s Boyfriend”) but instead, I will say, without reservation, that Don’t Think Twice has been my favorite film of the year. It captures the cadence of relationships among friends and the challenges of wanting to create for a living with a subtlety that shouldn’t be possible in a film about improv, the world’s least subtle comedy style.

“It’s like a weirdly prophetic movie,” Mike Birbliglia said, in the basement of a SoHo hotel where we had chairs set up in an otherwise empty meeting room. In the film, a comedy theater is shutting down and being replaced by a Trump building.

“I wrote it like two years ago. And Gillian [Jacobs] goes, “Mike, the Trump candidacy feels like it’s real, like it’s not a joke,” and I remember thinking, Silly actors, they don’t know. And here we are. And it’s so funny because on the set we had this conversation where I was like ‘Guys, is there anybody we can think of that could substitute for Trump, anyone who’s done more harm to New York City?’ And we all brainstormed and we couldn’t think of anybody.”

MIKE BIRBIGLIA: Its funny when the whole country is like, he’s a good businessman and then, as New Yorkers, we know he isn’t.

This is your second movie produced by Ira Glass. Are you guys best friends? Does he have blackmail over you to keep you working for him?

We’re very close friends. I think he claims his best friend is Robert Krulwich which I take issue with. I think that that’s a fraudulent friendship. I think it’s one of those Bennifer types—the public radio version of Bennifer where you’re like, is it real, is it not real, is it for the screen?

Taylor Swift and whoever that dude is.

I’m going to pretend not to know so I don’t seem like I’m as into it as I am.

Tay something? Taytleston? What was the merger?

Right. It’s their Hiddleswift, where no one is quite sure whether they’re really best friends.

But you work with him all the time.

Yup. Georgetown. I did improv for four years. And then we moved to New York—a bunch of us, four or five of us from our improv group. And we had a group that performed at UCB semi-regularly called “Little Man.” And then we went our separate ways, and I veered towards standup, because I was doing standup simultaneously.

“The thing people don’t realize when they’re starting out in standup is to develop a good ten minutes you have to write about six hours.”

So is the film loosely based on a true story?

No. It’s not. It’s actually based on nothing. After Sleepwalk With Me I veered back towards improv because I realized that the principles of improv had taught me how to direct a film.

All of the ideas—say “yes,” it’s all about the group, listen more than you talk—are just great for life and collaboration. When you’re directing 100 people, you have to listen to the input of all hundred people and translate that into how that relates to your vision. It’s in someway singular, but at the same time, it’s this massive collaboration.

Is there actual improv in the movie? Was it all written?

It’s surprisingly written for something that is about improv. But, that being said, when I hired these five people—you want what they have. You want to hear their version of it. So I would always say, be liberal with the lines. I want it to feel like the movie Once. I want it to feel like it’s more like life than it is like a movie. Those are just the movies that interest me.

I like Broadcast News, Hannah and Her Sisters, Big Chill—I like movies that just feel loose. Beautiful Girls. All of Nicole Holofcener’s movies—Lovely and Amazing. Please Give is a great one.

Do you ever feel like you’re too smart for L.A.?

For L.A.? I don’t live there. I live in Brooklyn. So, yes. I’m realizing it just now! Yeah, no, I don’t live in L.A. by design. I mean, California has a lot of wonderful qualities. I think whenever I’m in Los Angeles I feel very commoditized because the whole town is a business and I think that my value is lower than I think it should be, and as a result I just feel bad. People treat me like my show business “value,” and I don’t like my show business value.

I think Hollywood doesn’t value niche performers. You know what I mean? I’m really proud of the fact that I was able to run a show off-Broadway for four months, and live in New York with my wife and baby and do a show I’m really proud of and I have creative control over. No one cares about that in L.A. But if were a star of a sitcom, they would care. But I don’t want to be a star of a sitcom.

So show business’ values and me don’t coincide—they don’t interact. I’m proud of being niche.

I think of them similarly—not everyone does. Jerry Seinfeld said in an interview—it was called On Comedy With Jerry Seinfeld in ’81—he said, when you’re a standup comedian, the audience is your scene partner, you listen to the audience, you’re responding to their energy, to their laughing. In improv, you’re doing that with a person on stage, and then as a group you’re interacting with the audience.

I don’t know. I mean, some standups make good actors and some don’t. There’s definitely a line, and I think there’s some standups that can’t relinquish control, which is necessary in acting, because they’re so tightly wound, which serves them in standup but maybe doesn’t in acting. I’d like to think of myself as kind of an improv-leaning standup.

What advice would you give to a beginning standup?

So, Don’t Think Twice has such a powerhouse cast.

This movie is a lucky break, in that I am lucky that all five of these people showed up and gave 150 percent of themselves to the movie. And that the cinematographer, Joe, did a wonderful job, and that our first AD did a phenomenal job, and just all the way down the line. I gave it my all, but at a certain point if people don’t show up, you don’t have the movie.

What were the challenges of directing your second movie, as compared to your first?

And then you do the second one, and you know it all. You know that if the soundtrack isn’t good, the movie falls apart. You know that if you don’t get a good boom operator, then you’re fucked in the edit. You don’t know that when you make your first movie. You can read a lot of books—you read Sidney Lumet’s book, or Elia Kazan’s—but you don’t know. It’s not in your bones.

What would you have changed about Sleepwalk With Me if you were to do it over?

You wrote a book (“Sleepwalk with Me: and Other Painfully True Stories”) in 2012. Are you planning on writing more books?

An author, Angela Duckworth I think, wrote a piece for the New York Times recently where she said, ‘If I were giving advice to college students’—and this relates to the film scene in some ways too—’I’d say don’t think about what you want to be when you grow up. Think about the world you want to live in and how you can help make that happen.’ And I think in terms of me, in terms of what I have to contribute to the world, is creating things. I have the ability to create things that are dramatic and comedic and I think that’s the best I have.

Do you have a favorite book? Or what are you reading now?

I was re-reading Animal Farm last night when I fell asleep. Partly because my wife had come up with the idea—at the beginning of the movie, there’s like the rules of improv, one, two, three—my wife, who’s a consulting producer on the film, had come up with that during the edit: “What if you had the rules during the beginning to set the stage for, so when they break the rules, what that means.” So that’s one of the reasons that are in there.

How do you pick the stories from your own life that make the best stories on “This American Life”?

A lot of it is what runs on a loop in your brain. I also think if you free-write and you journal, you find stuff. You write something down and you think, that’s something worth repeating. It’s a huge process of elimination: for every 20 stories I write, one ends up being worth repeating.

Are you politically active?

I struggle with it. I wrote on my wall when I was writing the movie: ART IS SOCIALISM BUT LIFE IS CAPITALISM. And that was one of the guiding principles of the movie. Life isn’t fair. It was one of the best things my mom said when I was a kid. My older siblings would get a bigger piece of pizza or the better bike, and I’d go “It’s not fair!” and my mom would go, “Nothing’s fair. Life isn’t fair.” I think that’s the best thing you can tell your children.

Don’t Think Twice is currently in limited release. The film will expand to Los Angeles and Chicago on July 29 before a nationwide release in August. 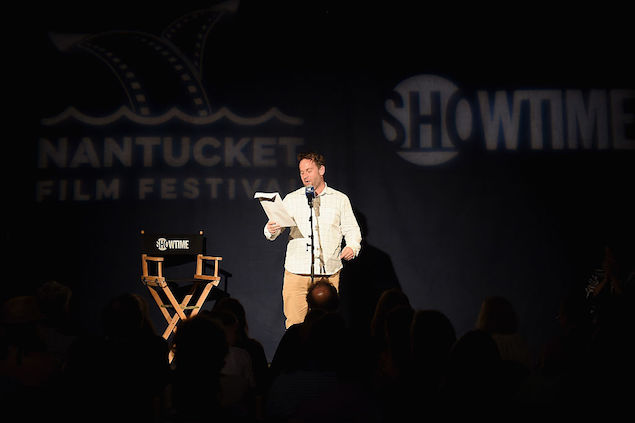