In his speech accepting the vice presidential nomination at the Republican convention tonight, Indiana Gov. Mike Pence was self-effacing. He paid tribute to the qualities and accomplishments of others. He used the word “we” instead of “I.” He spoke in complete sentences. He outlined clear and traditionally conservative policy stances. He even refused to echo the blood-hungry cries of “lock her up” from the crowd when he mentioned Hillary Clinton’s name.

He was the anti-Donald Trump.

“He’s a man known for a large personality and a colorful style and lots of charisma. And so, I guess he was just looking for some balance on the ticket,” Pence told the audience, provoking laughter before he launched into a folksy ode to his parents, wife and children.

The Hoosier governor described the tax cuts passed in his two-and-a-half year tenure and the credit ratings achieved. But he didn’t attribute those successes to his supposedly  unique, incomparable qualities as a leader.

“Indiana is a state that works, because conservative principles work every time you put them into practice,” he said, pivoting to talk about the man at the top of the ticket. “That’s what you can do with Republican leadership, and that’s exactly what the no-nonsense leadership of Donald Trump will bring to the White House.”

He then embarked on the longest-ever paean of praise to Trump not uttered by Trump himself.

“Donald Trump is the genuine article. He’s a doer in a game usually reserved for talkers,” Pence said. “He’s his own man. Distinctly American. And where else would an independent spirit like his find a following than in the land of the free and in the home of the brave?”

“But I’ve seen this good man up close. His utter lack of pretense. His respect for the people who work for him. And his devotion to his family,” the pol continued. “These are the true measures of our nominee. Chosen by the voters as the right man for his times. This is the outsider, my running mate, who turned a longshot campaign into a movement.”

The audience was no less enthusiastic for his lack of self-aggrandizement. Chants of “we like Mike” burst out intermittently on the floor and in the stands. Pence waited for them to end before speaking again. And when the cries of “lock her up” began during his attacks on Clinton’s record, he quickly told the delegates to “hold it.”

The convention saluted the conclusion of his speech with a standing ovation.

Pence served ten years in the House of Representatives and gained a reputation as a steadfast conservative outsider before he got elected to lead the Hoosier State in 2012. He endorsed Texas Sen. Ted Cruz’s unsuccessful bid to win the Indiana primary.

He vaulted to national prominence this spring after he signed Indiana’s Religious Freedom Restoration Act. The law purported to grant vague blanket protection to individuals, businesses, churches and social organizations from any government action that would “substantially burden” their “exercise of religion.”

Many interpreted the statute as a license to discriminate against sexual minorities. Gov. Andrew Cuomo and other Democratic governors reacted by banning subsidized travel to Indiana, while an array of other interests severed financial ties to the Hoosier state.

Facing the loss of $60 million in revenue, Pence and the Indiana State Legislature amended the law to include language shielding gays, lesbians, transgender people and other gender-nonconformists from unequal treatment.

Trump made his VP selection in a typically erratic fashion. After weighing an array of potential understudies—ranging from New Jersey Gov. Chris Christie to ex-House Speaker Newt Gingrich—Trump’s political handlers settled on Pence and leaked word to the media this past Thursday.

But Trump himself, it seemed, still had misgivings. And when a terrorist attack struck Nice, France that night, the candidate grasped at a last opportunity to put off the official announcement scheduled for Friday. Ultimately, Trump proclaimed Pence his running mate via Twitter.

But reports swiftly emerged alleging the developer had scrambled to see if he could still decide on another righthand man. 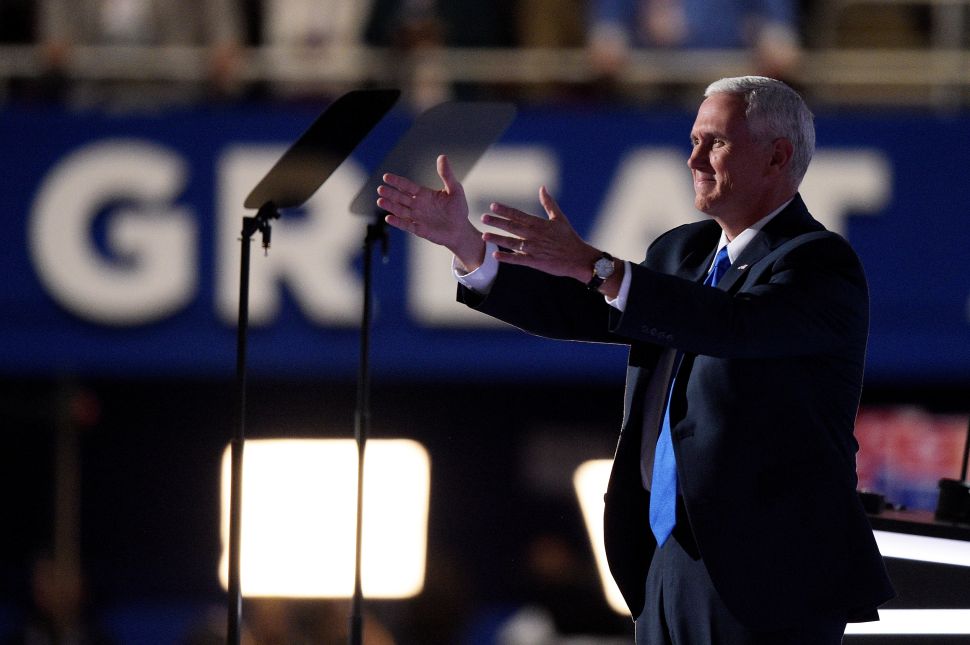